How Cats Have Learned to Manipulate Their Humans 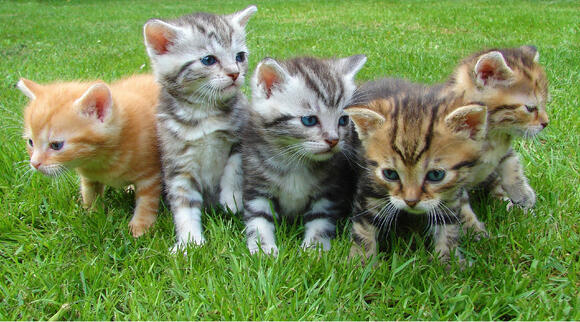 Everyone knows the history of dog domestication. It probably went something like this:

Thousands of years ago, a friendly human was cooking by a fire. The smell attracted some friendlier-than-normal wolves. They sat by the fire, maybe enjoyed some of the food, and hung out with the humans.

Over time, humans and wolves both evolved towards a mutually beneficial relationship. Wolves that were more companionable, enjoyed a scratch and a cuddle, and maybe were protective of their adopted human “pack” were given food and love. And humans grew to love and appreciate those friendly wolves right back.

But what about cats? How did house cats go from roaming mountains to purring in our laps?

You might be tempted to believe they arrived in our lives, fully formed, with no influence from us. Perhaps one day a wildcat leapt into our lives and demanded some treats. They’d certainly like you to believe that. The fact is, it’s not far off the truth.

Experts agree that cats, true to form, domesticated themselves. Mice and rats have long followed humans, as people have a messy habit of leaving crumbs behind. Like the pied piper, this brought cats into our lives, too. Unlike dogs, who were selected and bred for specific traits, cats wandered into our lives 4,400 years ago for the promise of food and never looked back.

This might explain why some people believe cats aren’t truly domesticated. As William Burroughs wrote:

“The cat does not offer services. The cat offers itself.”

While some cats can be trained, it’s a lot harder to do than with dogs. When you call a dog’s name, she bounds over to you, tongue lolling out in a canine smile. When you call a cat’s name, he might stop washing a paw, stare at you for 10 seconds, before seeming to consider coming over to you.

However, this makes sense — dogs have been much more extensively bred than cats, with 400 recognized breeds (compared to 38–45 cat breeds), with specific traits being focused on, such as security, herding, or docility. Cats have only much more recently been bred for specific traits.

We see cats differing much more from the archetypal wildcat. While you may not have a secret wildcat in your house, disguised as a common house-cat, your tabby might not be as tame as you think.

If released into the wild, most cats can more than fend for themselves, living perfectly happy lives catching small rodents and birds. Perhaps cats have in fact domesticated us — to feed them, pet them, and look after them, all while they do nothing but look cute.

Cats have evolved to control us.

But one aspect of the human-feline dynamic isn’t really explained by this, and that’s the fact that cats are natural manipulators.

Every morning, my cats like to perch on my chest and make a peculiar meow-purr combo. I’ve learned to associate this with breakfast time, so I dutifully rise and go make them their tasty, meaty food.

I’m not a mother, but something in me responds in a deep, primal way to those cries. And when I researched why I was so driven to help my kitties with whatever they wanted, I found it’s because I think of them as my babies. This is an association the cats have carefully cultivated.

You might know that cats don’t meow to each other in the wild. Bu you might not know that cat noises are uncannily similar to baby cries. And that this cry gets more and more urgent to our ears the more the cat wants to be fed.

One study shows that people, even ones who have never owned cats, respond to this meow-purr for food with more urgency and more care than normal meows. What’s more is that cats don’t make those meows for strangers — only their carefully trained owners who can be relied on to feed them.

Now that’s food for thought. Next time I’m being manipulated into giving my cats more food, I’ll probably carry on and maybe even give them extra.

6 Signs You’re Absolutely Not Ready for a Serious Relationship

I fell into my first serious relationship when I’d just turned eighteen. Fresh in my first year of college, living abroad in England, I hadn’t even started classes when I met my future boyfriend.

Over the weekend, Prince William was allegedly named the world’s sexiest bald man by The Independent, a pretty well-respected newspaper. Many people looked at the tweet, laughed, and then moved on with our lives, assuming it was some weird PR stunt after the Harry and Meghan interview.

I’d love to say that I’m one of those people who effortlessly journals 20 minutes a day. I’d love to claim that my daily diary habit fills me with gratitude, the opportunity to reflect, and a chance to become self-aware.

Is it actually possible to make money selling your tweets? As of recently, I learned it’s possible to earn somewhere between $0 and $2.5 million. Jack Dorsey, the founder of Twitter, is minting his first-ever tweet on the blockchain by selling it to the highest bidder (currently $2.5 million, but bidding is open until March 21st if you want to own a piece of history and have $2,500,001 lying around).

If You Still Believe "Irregardless" Isn't a Word, You're Wrong

A few monthy ago, a bunch of people had a mini-meltdown because an official dictionary tweeted about the word “irregardless” as though it was legitimate. People had a lot of feelings about that. And here's exactly why that's garbage.

Michelangelo was not born famous. No, he labored in obscurity for several years before rocketing up into stardom. But it wasn’t an organic discovery that brought him to the attention of the Roman elites: it took trickery, forgery, and a masterful grasp of marketing.

How many times have you sat down to write an article, only to be stumped by one of the common woes that afflict writers? There are so many potential blockers between getting an awesome idea for a blog post and actually hitting publish on that post that it’s a wonder we manage to write at all.

I Ignore 95% of Emails Asking Me For Help. Here’s What the Ones I Reply to Have in Common

Thanks to the magic of the internet and email, you can reach out to pretty much anyone and ask for their help. Approached correctly, most people will. This is what makes it so surprising that so many people mess up this golden opportunity.

Keeping secrets makes people act weird in extremely predictable ways. I was sixteen the first time I caught a boy two-timing me. “You’re not like other girls. I just don’t want labels — what we have is so good and uncomplicated,” David told me sweetly during a lunch date-that-wasn’t-a-date. That same night, he bragged to his friends about how he was simultaneously going out with me and a friend of mine at the same time — secretly.

Spoiler alert: you don’t need to average 52 books per year to be a good reader. I still vividly remember rolling my eyes so far back in my head that I accidentally gave myself a headache when I overheard this one guy brag about how good he was at reading because he averaged reading 5 books per month.

Have you had that ultra-embarrassing moment when you’re talking to someone and you’ve forgotten their name? Or that you’ve been monologing about yourself for the past five minutes? Or that you’ve made a joke that was badly received? I totally have.

Most YouTubers and Bloggers Will Fail in 2021. This is Why.

We’ve had it drilled into our heads about a thousand times by now. Content is King. Context is God. Maybe Distribution is Queen. Either way, there’s some mystical deity out there that all creators need to bow their heads down to in order to succeed, get clients, get famous, get paid.

We all know the signs of bad romantic relationships — controlling behavior, jealousy, insecurity. Breaking up with a toxic boyfriend or girlfriend is pretty standard. But for some reason, crappy friends often get to fly under the radar with awful behavior that we tolerate for no real reason.

The funny thing about selfish people is that you can go your whole life being friends, coworkers, or lovers with them and you’d never know it, especially if you’re the kind of person who gives with no limit.

The Nutritionist Who Convinced 12 People to Starve Themselves to Death

Why I Refer to Our Robot Vacuum Cleaner As “He”

If it seems weird, ask yourself why. I was surprised and annoyed to discover that our robotic vacuum cleaner Roomba has a robotic yet distinctly feminine voice. The last iteration we owned didn’t have a voice at all, but this one says helpful things aloud, like, “Error: move Roomba to a new location,” or “Error: place Roomba on a flat surface,” in a pleasantly deep woman’s voice.

Why Are Instagram Influencers Paying Money to Sit in Fake Private Jets?

Instagram and TikTok are places for rich people to show off their lavish, unearned lifestyles to their millions of followers — and for people who want those lifestyles to pretend they already have them, in pursuit of one day finally getting it for real. It’s a never-ending circle.