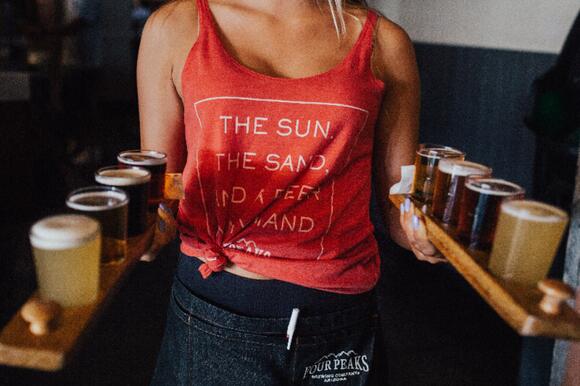 When I worked at a tech startup, had a fun tradition at our workplace, in common with lots of others I know of England: when someone gets up to make themselves a drink, they ask the office if they want one, too.

I lived in England where the national pastime is drinking tea, so this little ritual happens quite a few times a day. It’s happened often enough that I started noticing an odd pattern.

The men? Three. One developer got up to make himself a cup of coffee and I forcefully handed him my mug and said I’d like a peppermint tea, please. One of the finance team handed him her mug as well, requesting a decaf instant coffee. But that was it. Just three.

In a week, this tallied up to 53 hot drinks consumed by men, versus 11 drinks made by men.

Now, you might say it’s a choice. The men just don’t want tea and coffee, they’re so busy coding that they forget they’re thirsty. They’d be fine if nobody offered, they’d simply not drink. They don’t get up and make only themselves drinks — if nobody offers, they go without.

But I think it goes deeper. It’s revealing, to me, that there’s no implicit feeling of reciprocation. The men in the office have no problem accepting cup after cup after cup, without once feeling that they should offer, too.

The men take, but they don’t offer.

Here’s the thing: I can’t imagine taking without giving. I can’t imagine receiving without reciprocating. I feel guilty enough whenever someone does me a favor and I’m unable to do anything but say “thanks.” It’s foreign to me, to think of accepting anything, whether it’s a word of praise or a cup of tea, without wanting — no, needing to reciprocate as quickly as possible.

These office workers have no problem accepting drink after drink after drink, the thought never once crossing their mind that they could offer to do the same — even if they weren’t thirsty!

They don’t do it intentionally — there’s no malice in their inability to reciprocate, it’s simply a systemic lack of consideration for others. A lack of thought that others’ time is valuable, just as valuable as their own. Paired with the women in the office generously and dutifully offering hot drinks on a regular basis, there’s been no need to develop this sense — so radical to some men — of thinking of others.

One man that I worked with actually set himself a reminder. At three pm every day, he’d get a little buzz — reminding him to get up and offer cups of tea, in exchange for the 3–4 he’d have made for him throughout the course of the day.

And so many times, I watched him look at his phone when it buzzed, look up at his own work, and switch the alarm off without making the offer. Like clockwork.

Sexism goes further than a cup of tea.

I noticed this months ago and for months I resisted my conclusions, thinking I was reading too much into it. But see an instance of casual sexism happen often enough, and you have no choice but to admit it’s a pattern. Week after week, I watched the women get up, offer to make hot drinks. I watched the men thoughtlessly and thanklessly accept. I counted how often they reciprocated and the number was small.

And it wasn’t just the tea. When the office lines were left unattended by the receptionists, women were asked to cover them, even though the men were closer. When the office manager asked people to clean up after themselves in the communal kitchen, the men most often neglected this task.

It’s part of the same culture that expects women to do “office housework” — these unpromotable gruntwork tasks that somehow, someway, even in the most progressive companies, always seem to fall to women.

My rebellion was to be more selfish.

The advice given to women in these situations? Simply stop. So, I did.

It’s possible this wasn’t the right choice. It felt selfish. But in an era where women are expected to do it all if they want to have it all, it seemed revolutionary to just make myself cups of tea, without offering others. And even then, men still passed me their cups on my way to the communal kitchen. Was my time worth so much less than theirs? Were my needs so much smaller?

It’s just a cup of tea, at the end of the day. It’s only an extra few minutes. But add that all up, add all that extra housework up, count the number of times you clean dishes that aren’t yours, make teas that aren’t yours, organize office parties, bring in baked goods, or any other bits of work that you’re silently obliged to do?

If you’re like me, the result means it’s worth your while to be a little more selfish in the office. I make myself my own hot drinks, and if the men want one? They can make their own like anyone else.

Over the weekend, Prince William was allegedly named the world’s sexiest bald man by The Independent, a pretty well-respected newspaper. Many people looked at the tweet, laughed, and then moved on with our lives, assuming it was some weird PR stunt after the Harry and Meghan interview.

6 Signs You’re Absolutely Not Ready for a Serious Relationship

I fell into my first serious relationship when I’d just turned eighteen. Fresh in my first year of college, living abroad in England, I hadn’t even started classes when I met my future boyfriend.

I’d love to say that I’m one of those people who effortlessly journals 20 minutes a day. I’d love to claim that my daily diary habit fills me with gratitude, the opportunity to reflect, and a chance to become self-aware.

Is it actually possible to make money selling your tweets? As of recently, I learned it’s possible to earn somewhere between $0 and $2.5 million. Jack Dorsey, the founder of Twitter, is minting his first-ever tweet on the blockchain by selling it to the highest bidder (currently $2.5 million, but bidding is open until March 21st if you want to own a piece of history and have $2,500,001 lying around).

If You Still Believe "Irregardless" Isn't a Word, You're Wrong

A few monthy ago, a bunch of people had a mini-meltdown because an official dictionary tweeted about the word “irregardless” as though it was legitimate. People had a lot of feelings about that. And here's exactly why that's garbage.

Michelangelo was not born famous. No, he labored in obscurity for several years before rocketing up into stardom. But it wasn’t an organic discovery that brought him to the attention of the Roman elites: it took trickery, forgery, and a masterful grasp of marketing.

How Cats Have Learned to Manipulate Their Humans

Everyone knows the history of dog domestication. It probably went something like this:. Thousands of years ago, a friendly human was cooking by a fire. The smell attracted some friendlier-than-normal wolves. They sat by the fire, maybe enjoyed some of the food, and hung out with the humans.

How many times have you sat down to write an article, only to be stumped by one of the common woes that afflict writers? There are so many potential blockers between getting an awesome idea for a blog post and actually hitting publish on that post that it’s a wonder we manage to write at all.

Keeping secrets makes people act weird in extremely predictable ways. I was sixteen the first time I caught a boy two-timing me. “You’re not like other girls. I just don’t want labels — what we have is so good and uncomplicated,” David told me sweetly during a lunch date-that-wasn’t-a-date. That same night, he bragged to his friends about how he was simultaneously going out with me and a friend of mine at the same time — secretly.

I Ignore 95% of Emails Asking Me For Help. Here’s What the Ones I Reply to Have in Common

Thanks to the magic of the internet and email, you can reach out to pretty much anyone and ask for their help. Approached correctly, most people will. This is what makes it so surprising that so many people mess up this golden opportunity.

Spoiler alert: you don’t need to average 52 books per year to be a good reader. I still vividly remember rolling my eyes so far back in my head that I accidentally gave myself a headache when I overheard this one guy brag about how good he was at reading because he averaged reading 5 books per month.

Have you had that ultra-embarrassing moment when you’re talking to someone and you’ve forgotten their name? Or that you’ve been monologing about yourself for the past five minutes? Or that you’ve made a joke that was badly received? I totally have.

Most YouTubers and Bloggers Will Fail in 2021. This is Why.

We’ve had it drilled into our heads about a thousand times by now. Content is King. Context is God. Maybe Distribution is Queen. Either way, there’s some mystical deity out there that all creators need to bow their heads down to in order to succeed, get clients, get famous, get paid.

We all know the signs of bad romantic relationships — controlling behavior, jealousy, insecurity. Breaking up with a toxic boyfriend or girlfriend is pretty standard. But for some reason, crappy friends often get to fly under the radar with awful behavior that we tolerate for no real reason.

The funny thing about selfish people is that you can go your whole life being friends, coworkers, or lovers with them and you’d never know it, especially if you’re the kind of person who gives with no limit.

The Nutritionist Who Convinced 12 People to Starve Themselves to Death

Why I Refer to Our Robot Vacuum Cleaner As “He”

If it seems weird, ask yourself why. I was surprised and annoyed to discover that our robotic vacuum cleaner Roomba has a robotic yet distinctly feminine voice. The last iteration we owned didn’t have a voice at all, but this one says helpful things aloud, like, “Error: move Roomba to a new location,” or “Error: place Roomba on a flat surface,” in a pleasantly deep woman’s voice.

Why Are Instagram Influencers Paying Money to Sit in Fake Private Jets?

Instagram and TikTok are places for rich people to show off their lavish, unearned lifestyles to their millions of followers — and for people who want those lifestyles to pretend they already have them, in pursuit of one day finally getting it for real. It’s a never-ending circle.