Welcome2TheBronx is the largest independent blog and news site in the Bronx dedicated to providing you with the most up-to-date content and news on our borough.

Plans filed for mega $2 Billion development in The Bronx

Two years ago, 'Fordham Landing' was proposed as a massive redevelopment of the Harlem River Waterfront in The Bronx directly south of the University Heights Bridge at Fordham Road that would bring thousands of residential units to the area.

Now, the developer has filed plans for the first building in the development which would rise 17 stories at 320 W Fordham Road at the foot of the University Heights Bridge with 602 residential units spread across 582,122 square feet.

And this is just the beginning for the development. 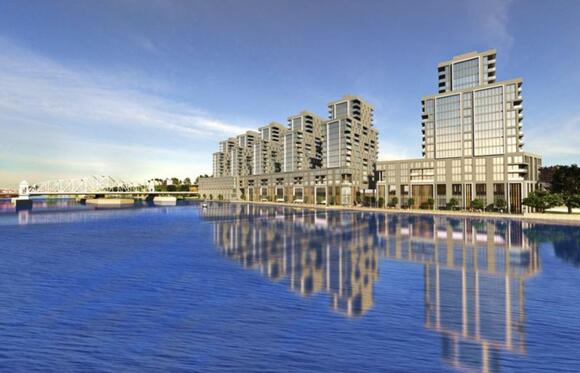 Originally planned as a 2,800 residential unit development that would include a hotel and an upgraded Metro North Station at University Heights, the project has been scaled down to 2,400 units and a price tag of $2 billion rather than the original $3.5 billion original estimate.

The proposed development would spread across 30 acres on the Harlem River Waterfront and include half a million square feet of office space and 100,000 square feet of community space according to Crain's.

Construction is expected to begin in late 2022 with an estimated completion time around 2024-2025 for the first building. 30% of the 602 units will be set aside as "affordable" meaning that this development will be market rate and not targeted at the local, existing population in the surrounding area.

While construction for the initial residential tower at 320 W Fordham Road does not require city approval, the remainder of the development requires zoning changes so plan on this development taking a considerable amount of time to be completed.

With a $2 billion price tag, Fordham Landing will dwarf the South Bronx's Bankside which is currently the borough's most expensive development costing just shy of $1 billion. That development, which is almost halfway complete, will bring 1,350 units of luxury housing to the South Bronx Waterfront at the foot of the Third Avenue Bridge.

As proposed, it would also be the largest development in New York City since Hudson Yards on Manhattan's West Side and it's this very comparison that brings concerns to what this may do to the area. 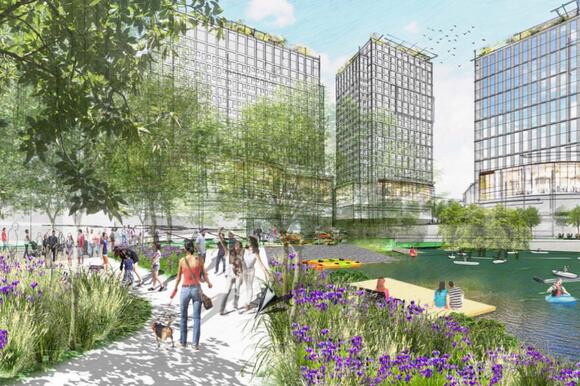 The proposed development is located in Bronx Community Board 7 where 27.4% of residents are below the NYC Poverty Line and only 16.6% have earned a bachelor's degree or higher.

As of last year, Community Board 7 was listed second in New York City as the area with the greatest risk to affordable housing where 65.8% of residents are severely rent-burdened paying more than 30% of their income in rent alone.

Of the roughly 2,400 units that are proposed for this development, 30% would be set aside as affordable housing or roughly 720 units.

Luxury housing on the waterfront will not help improve these conditions for existing residents but will only put more pressure on their already precarious situation. We've seen how this plays out across other neighborhoods in New York City and it seems that University Heights' fate will now face the same.

Welcome2TheBronx is the largest independent blog and news site in the Bronx dedicated to providing you with the most up-to-date content and news on our borough.

Fun facts, history, people, and things from The Bronx you probably didn't know

The Bronx has quite the image in many people's minds, whether locally or across the world, but there are many actual real things, people, facts, and history about the northernmost borough of New York City that many people don't know.

As another phase of construction is nearing completion at a controversial and gentrifying development along the Harlem River Waterfront in the Port Morris neighborhood of the South Bronx is nearing completion, a wave of online ads have been released touting the number of units that have been set aside as "rent-stabilized."

SEE IT: Dolphins spotted this week in The Bronx River!

A ticket worth $20 million bucks for this past Tuesday's mega-million drawing was sold in The Bronx at 170th Street Grocery in the Mount Eden neighborhood of The Bronx. This isn't the first time a winning ticket has been sold in The Bronx but it does appear to be the largest winning in recent memory.

The Bronx is freezing: Borough leads NYC in heat & hot water complaints for sixth year in a row

A new report by RentHop, a real estate listing website that also provides various annual reports in the markets they serve, compiles heat and hot water complaints across the five boroughs of New York City and shows that, once again, The Bronx has by far, the most such complaints.

The most expensive single family home for 2022 in The Bronx sold for $4.4 million

For almost a decade now, Welcome2TheBronx has joined activists calling for the creation of the TriboroRx line that would stretch from Co-op City, The Bronx to Bayridge, Brooklyn connecting its over 6 million residents—roughly 75% of New York City's population—without having to go through Manhattan as public transit commuters must do so now.

Two condos in the South Bronx sell for over $1.1 million each shattering real estate records

For the first time in South Bronx real estate history, condominium apartments have cracked the $1 million price tag. The two units are located in the Bronx Bricks condominium at 305 E 140th Street, the first condo loft conversion in the South Bronx back in 2008.

The Bronx is getting a new, green and futuristic library

The Bronx will soon be home to one of the most beautiful libraries in New York City. Renderings have been revealed for the new Westchester Square Library Branch of the New York Public Library, which, once complete, will replace the current branch located a few blocks away over on Glebe Avenue.

125 years ago, the five boroughs are joined to create today's New York City

On January 1st, 1898, after years of planning and razor-thin election results, the five boroughs we know today as The Bronx, Brooklyn, Manhattan, Queens, and Staten Island, were consolidated into one city to create the New York City we know today 125 years later.

On Tuesday morning, at the 161st Street and River Avenue Station on the 4, B, and D line in The Bronx, Bronxite Sasha Salazar became the one billionth subway rider for 2022. Salazar said of the historic moment, "Every New Yorker uses the subway every day and I know that we appreciate the MTA, all the workers that work for the MTA especially."

The Metropolitan Transit Authority, the agency that runs the New York City bus and subway system, is considering a fare hike that would start in the middle of 2023 and push fares to $2.90 per ride and to $3.02 per ride by 2025 in order to close an ever-increasing budget gap.

After decades of promises and false starts, ground has finally broken on the transformative Metro North Penn Station access in The Bronx today. The ceremonial groundbreaking event was held at the site of the future Parkchester/Van Nest Metro North stop—one of four to be constructed in the East Bronx—that will bring direct rail service to Manhattan's Penn Station as well as points north to Westchester and Connecticut in the estimated $3.18 billion project.

New York City declared the most expensive city in the world

A lottery has launched for affordable apartments in a newly constructed development in the South Bronx. Located at 341 E 162nd Street in the Melrose neighborhood of The Bronx, the development was constructed on a lot that had sat vacant for decades and owned by NYCHA.

See it: The most expensive house for sale in The Bronx for just under $5.5 million

Every once in a while, we'll take a look at current real estate listings in The Bronx for available properties for sale just to see what's going on in the borough and each time we do, we'll spot something that catches our eye.

Smile you're on camera! MTA activates bus lane enforcement cameras in The Bronx

You better think twice before your impatience pushes you to drive down a bus lane or, worse yet, double park on one and creating a traffic jam. The Metropolitan Transit Authority (MTA) announced last week that it has activated its automated bus lane enforcement cameras for the first time in The Bronx. They are now on the Bx12 and the Bx41 routes and will activate it in the coming days along the Bx19.

One of the most iconic singers and recognizable voices of the late 20th century, Irene Cara, is dead at 63. Born Irene Cara Escalera, on March 18, 1959, in The Bronx to a Puerto Rican father and a Cuban-American mother, she was taking piano lessons by age five after learning to play the instrument by ear.