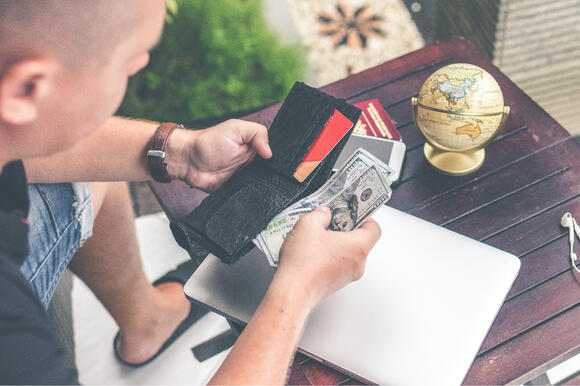 PHOENIX, AZ — Across the country, the majority of people are financially insecure. In 2017, approximately 80% of all Americans reported living paycheck to paycheck, 70% of those surveyed have some form of debt, and more than half believe they will never be able to repay it.

Arizona has the country's fourth-highest rate of asset poverty, which is defined as a household's ability to cover three months' worth of expenses in the event of an emergency.

A major illness or injury, a death in the family, a broken-down car, or a leaky roof can all lead to homelessness for Arizonans who live paycheck to paycheck.

Only 66% of Americans could afford a $400 emergency. When the cost of an emergency rises to $1000, the proportion of people who can afford it falls to 41%. That means that more than half of the population would have to save or borrow money.

High rents, on the other hand, deplete bank accounts faster than low wages replenish them. Many savings accounts charge significant fees for balances under $500, making it difficult for someone working a low-wage job to save after necessary expenses.

Seniors over the age of 62 make up more than half of those without a savings account. Seniors are also more likely to incur unexpected medical costs and take longer to return to work following an injury or illness.

High rates of social isolation, particularly after the death of a close family member, may leave a senior with few options in the aftermath of an unexpected expense.

Because of the numerous barriers to financial security, a sudden expense—or even a drastic pay cut or rent increase—costs many people their entire life. Even people who consider themselves to be financially secure may be one paycheck away from losing their homes.

TEMPE, AZ - After taking a few classes and reading some syllabi, you may have a better idea of what your courses this semester are like - and what kinds of study habits will not work. There are some tried and true tips from ASU Experts to help you ace your classes, study smart, and get your GPA up.

BULLHEAD, AZ - A position as a civilian police investigator is currently available in Bullhead City. This job works directly with criminal investigations and helps with criminal complaints. It is part-time and does not provide full benefits, but only 401A plans and vacation or personal time accruals are offered. In addition, this job does not cover medical, vision, and dental insurance.

Where To See Drag Shows Around Phoenix

PHOENIX, AZ - Drag is the hottest trend in pop culture right now. You have probably encountered a glamorous drag queen from your own residence through shows like "RuPaul's Drag Race" or Super Bowl commercials. We invite you to meet them in their home in Phoenix.

PHOENIX, AZ - Parkinson's symptoms can be alleviated with electrodes inserted into a brain region that controls movements. The substantia nigra, in the brain, is affected by Parkinson's disease, a neurodegenerative disorder. In addition to tremors and slower movement, called bradykinesia, dystonia can cause uncontrollable muscle contractions and difficulty walking.

PHOENIX, AZ - The Arizona heat may be extreme, but there's nothing better than a frosty popsicle to cool off. With endless flavor combinations easy to find throughout Phoenix, popsicles are in high demand - just order enough to keep for later.

PHOENIX, AZ - As a result of the Urban Heat Island effect, cities around the world are experiencing rising temperatures (UHI) effect. Roads, buildings, and other urban infrastructure contribute greatly to this phenomenon. After absorbing heat throughout the day, sidewalks re-emit it at night. It's time for us to bring Nature's cooling powerhouse back into our cities. A tree can make a big difference!

TEMPE, AZ - Some of us might approach each day with more spontaneity, embracing everything as it comes, or, planning everything in advance, and following that plan religiously. If you fall into that second group, then this post is for you.The first thing you need to do is identify your ultimate goal. Do you want to be a better student? Are you learning to cook? Are you running a marathon? Whatever your goal is, make it clear. Understanding your goal can help you eliminate distractions.

SURPRISE, AZ - One of the cities in Arizona offers a variety of entertainment for residents or visitors. For visitors interested in art, here are some kinds of art experiences that you can visit while in the city of Surprise.

BUCKEYE, AZ - Catalyst Program is a redevelopment program designed to attract private investment in Buckeye. Businesses/investors can apply for up to $50,000 of reimbursable funding for their development through the program. A good project would serve an Economic Development purpose and provide a public benefit.

Everything you need to know about recycling in Peoria

PEORIA, AZ - The Peoria Recycling Program has long-term benefits for the environment. It is essential to maintaining the economic and environmental conditions of the city. Recycling also provides an opportunity for the local economy as a source of materials such as plastic, metal, glass, etc., to be processed and created into new products.

5 Arizona's Libraries You Can Visit!

PHOENIX, AZ - A library is a haven for bookworms. You can study in peace or curl up with a good book at one of the impressive libraries in Arizona. There is no better place to gather than this. The following are the five libraries in the state.

SEDONA, AZ - This exhibition is held with the concept of exploring the intersection between trash and treasure containing workshops, exhibitions, and demonstrations that bring together found or forgotten objects and can then be used to make beautiful things. Materials can consist of an old tree, twig, cardboard, bicycle tire, metal, paper, or something else. The exhibition is open as a platform for artists to submit their 2D or 3D works made from these lost or found materials. Not afraid to think outside the box, canvas, or convention, SAC wants artists to submit pieces that capture the imagination and inspire.

GLENDALE, AZ - When trying to find a job, one needs to consider several aspects such as salary, job description, compatibility with abilities, benefits, and other contributing factors. Keep these things in mind as the Glendale Government is looking for the right candidate to appoint the Water Treatment Supervisor position.

Restaurants and bars that serve craft cocktails in Tempe

TEMPE, AZ - Cocktails that combine traditional spirits and other particular components that have been meticulously thought out and made to perfection are known as craft cocktails. Since it focuses on flavor and high-quality ingredients, creating a crafted cocktail is both an art and a science. These are some of Tempe's restaurants and bars that serve craft cocktails.

Building Your Confidence And Making Friends

PHOENIX, AZ - Arizona State University has welcomed its largest first-year cohort of on-campus students in yet another record-breaking year. This year, there are many second-year students who will be encountering in-person college life for the first time after spending their first year learning virtually.

Moving to Mesa: What You Should Know

MESA, AZ - As in much of Arizona, Mesa has a fairly average cost of living. The cost of living in Arizona is very affordable, especially for those coming from larger cities. Housing and transportation are the two categories that Mesa costs more than the national average. Transportation costs are probably higher than average across Arizona because of the higher insurance and registration fees for vehicles, so this likely does not affect Mesa specifically.

NASA Psyche mission to launch in a year led by ASU

PHOENIX, AZ - The countdown clock now displays a launch date less than 365 days away for the NASA Psyche mission team led by Arizona State University. Launches will take place from Cape Canaveral, Florida, in the launch period that starts August 1, 2022, as part of NASA's Discovery Program.

Communities Are Suffering From Extreme Heat

PHOENIX, AZ - Native Americans and Latinos in Phoenix are experiencing heat stress, and the COVID-19 pandemic is aggravating the problem, according to a new report from Arizona State University's Morrison Institute for Public Policy.

Learn About The Hohokam

TEMPE, AZ - Hohokam is derived from the word Hoohoogum (pronounced with the accent on the last syllable). Native Americans in this area call these prehistoric peoples their ancestors by this name. From A.D. 1 to 1450, the people of the Hohokam lived in the valley and southern Arizona. Hohokams were farmers who farmed corn, beans, squash, and agave. Cotton was also grown for textiles. To irrigate their agricultural fields, Hohokam constructed hundreds of miles of canals throughout the valley. Pioneer farmers used some of these canals in historic times after the canals were re-excavated. There was no domesticated livestock among the Hohokam. Hunting included deer, rabbits, and quails. Their canals allowed them to catch fish and shellfish.