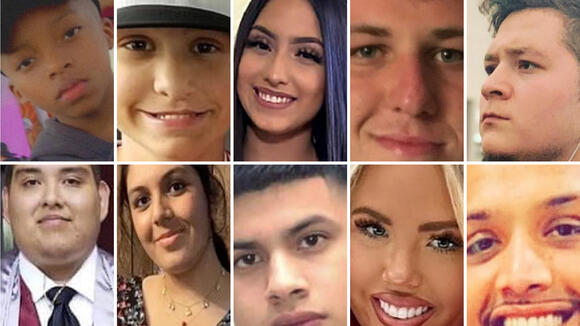 All ten people who died at Astroworld Music Concert.Sourced from social media & Supplied by family.

The names of all ten confirmed victims who were fatally injured at the Astroworld Music Festival have been released by Austin, Texas. Here is the update from the youngest victim to the oldest.

Also known as EB, he was a 9-year-old boy that attended the Astroworld music festival with his father, according to Variety and was trampled at the concert. He was on life support for a week until an attorney representing the family confirmed the news on Sunday that he had died from injuries.

Hilgert was initially reported as the youngest victim from the Astroworld Music concert tragedy. He was a 14-year-old freshman at Memorial High School, where he played football and baseball, the New York Times reports.

Rodriguez was a 16-year-old pupil from Heights High School in Houston, Texas, where she was a drill dancer and a major part of the band programme. Rodriguez was with a group of friends at the festival when the crowd surged toward the stage during Scott’s performance, the New York Post reported. .

Jurinek was a 20-year-old junior that was enrolled in the field of Journalism at Southern Illinois University Carbondale. Following the events of his death, the SIU and Carbondale community gathered to honor his life at a memorial service that has been covered by The Daily Egyptian.

Patino happened to be a 21-year-old senior from the University of Dayton, where he was enrolled in the institution's engineering/technology faculty and studying mechanical engineering technology and human movement biomechanics.

Acosta was a 21-year-old junior at Western Washington University in Bellingham, Wash. Acosta is said to have been majoring in computer science. ABC13 reported that initially, the authorities needed the public's help to identify Acosta. Until his father later identified the body that had been recovered from Memorial Hermann Hospital after the incident.

Shahani was a 22-year-old woman who was seriously injured at the event and showed no brain activity shortly after arriving at the hospital, only to die on Wednesday, November 10, 2021. According to her family, she was a student at Texas A&M University, studying Computer Science after dropping Chemical Engineering at the end of her first semester.

Peña happened to be a 23-year-old student at Laredo College in Laredo, Texas. Pena was known as an aspiring model and psychology student with aspirations of someday becoming a U.S. Border Patrol agent, as reported by KGNS TV.

Dubiski was a 23-year-old Houston resident who graduated from Cypress Fair High School. He then later enrolled at the University of Mississippi. At the time of her death, she worked at a Houston-based advertising agency.

Baig was a 27-year-old who worked at AT&T, where he was a district manager. He also happens to be the eldest of the ten people who lost their lives at the Astroworld Music Festival. People Magazine reported that he died while trying to save his fiancé.

Messages of condolences have been pouring across the world, and members of the entertainment industry share their heartfelt messages to the affected families.

Around 300 more people were reportedly wounded, according to a report from Variety, and the health status of many more remains unknown.

Only ten fatalities have been confirmed, and the health officials are unsure whether this number will increase in the coming days or weeks.

- This is a developing story.

Pfizer has hinted at developing a coronavirus vaccine that will solely be designed to target the Omicron variant, the company has revealed. Pfizer Inc. headquarters is seen in New York City.Jeenah Moon / AFP.

Grant Stern has once again claimed to have been kicked out during a press briefing before asking Governor Ron DeSantis if the state let nearly a million Covid tests expire last week while he was on Christmas break.

Opinion: The court's decision to allow Djokovic to play poses a risk and undermines AU's health

On Monday, an Australian judge ordered that Novak Djokovic be released from immigration detention following the athlete's controversy pertaining to the Covid-19 vaccine. A decision that seems to undermine Australia's health protocols in place to please an anti-vaccination tennis player writes Victor. This opinion piece will dissect the matter.

A report has noted that Travis Scott and his management wanted to keep his Coachella slot due to the fact that his performance was going to be dedicated to Astroworld victims, acccording to an inside source from Variety.

The governor of Colorado has lowered the 110-year sentence of truck driver Rogel Lazaro Aguilera-Mederos in a vehicular homicide case to just 10-years because the tragedy was an "unintentional act".

Over a year ago, Biden said Covid-19 pandemic is a federal problem. Recently, he said it's a state problem

Over a year ago, before United States President Joe Biden took office, he said that the coronavirus pandemic is a federal problem. Recently, the president has come under fire for "changed" views, where he seemed to be placing responsibility on states.

Omicron appears to be spreading faster in the U.S. than in Southern Africa, despite Biden's travel bans on those nations

The Omicron variant seems to be spreading a lot faster in the United States than any of the Southern Africa countries that were hit with travel bans by the White House. Covid-19 travel stock photo.Olya Kobruseva / Pexels.

The Los Angeles Black Lives Matter organization that threw its support behind Jussie Smollett accused the Chicago Police Department of having no respect for the lives of Black people in a report.

Travis Scott's team is yet to confirm the news of him no longer being the main headline act for 2022's Coachella, despite major publications reporting this. Rapper Travis Scott during his 2017 Coachella set list.Frazer Harrison / AFP.

Texas has come under the spotlight for their immigration policy on foreign nationals and how it is being implemented. There are also several issues that have been raised about the way the state is defying Constitution rules.

A few influential Republican leaders have criticized CNN for understating Jussie Smollett's charges on a headline of one of their stories that went viral on Twitter late on Thursday.

Residents of Denver, Colorado, have been left concerned due to no sign of snow this winter, marking over 200 hundred days since the area last experienced flakes. Skiers walked on exposed pavement in ColoradoJason Connolly / Getty Images.

A journalist has spoken out about the backlash that Hulu received for airing the Astroworld documentary, saying that the documentary would have answered questions that the public has on how the deaths happened.

The state of Florida is yet to reveal if the first person who tested positive with the Omicron variant travelled outside the United States or contracted Covid-19 locally. Coronavirus stock composite photo.Edward Jenner / Pexels.

Some of the families of the Astroworld Music Festival victims have reportedly turned down Travis Scott's offer to cover burial costs. Days after ten lives were lost at the tragic Astroworld Music Concert, Travis Scott offered to cover the funeral expenses of all victims, according to a report by Variety.

Online backlash caused the Astroworld documentary series to be canceled

The online backlash that Hulu received is reportedly responsible for canceling the Astroworld Documentary series that the network planned. Astroworld Concert From Hell posterHulu / ABC13/KTRK-TV.