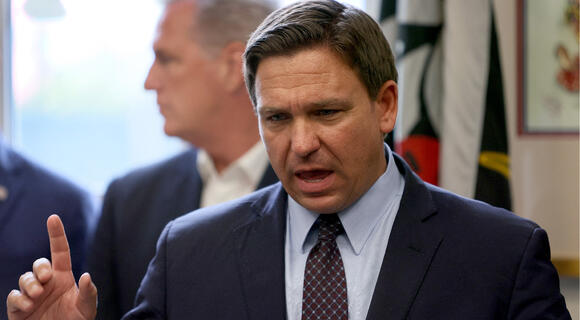 According to experts, Florida's Ron DeSantis is the most popular governor to have downplayed the highly contagious Delta variant. To understand why a majority share the same sentiment, you need to look at the following five major points:

1. The Feud between Biden and DeSantis

On Thursday, Gov. DeSantis ripped into President Joe Biden's plan to distribute doses of monoclonal antibody treatments to states across the nation.

Florida and other six states have relied on the therapies to treat patients that have been infected with the novel coronavirus, but they also have been taking at least 70% of the orders since the beginning of September.

DeSantis loudly spoke about how Florida is being punished for peddling the Covid-19 antibody treatment before the White House while the deadly Delta variant continues to spread around Florida.

President Biden told business owners to weekly test their workers who refuse to get the vaccine, and maybe more than that, they will fold and decide to get the Covid-shot.

This obviously did not sit well with DeSantis, who went on a rant following this comment that was coupled with the White House looking at vaccine mandates for government employees.

On Monday, the governor had a press conference in Gainesville, where he "addressed" vaccine mandate choices from the federal government - choices that were still being tabled.

Even ironic is how the DeSantis and few republican cabinet members got their Covid-jabs but stayed opposing vaccine mandate.

DeSantis's response to the Delta variant is evidently aimed at fighting school boards that have mandated that students wear masks.

It does not end there, and the governor is also serious about fighting local elected officials who want their employees vaccinated and fight the president of the United States.

DeSantis has made it clear that he does not support mandating vaccines, especially employees, as that would exacerbate staffing shortages.

As such, all businesses around Florida have been banned from even thinking of mandating Covid-vaccines from its employees, let alone customers, before servicing them.

The Department of Health in Florida warned state establishments and companies from requiring proof of Covid-19 vaccine from residents and employees.

At the beginning of the year, the Republican-led Florida Legislature passed a bill that banned businesses, governments and educational institutions from requiring vaccine proof from the residents.

The bill was signed into law in early May by Gov. DeSantis, and with that, the state's Department of Health was given leeways to issue fines that do not exceed $5,000.

On August 27, the DOH filed a rule to explain how they will enforce the measure and how the $5,000 fine will be tabled.

The fine will either be per individual and or separate violation, where violators will be issued with a notice that allows them to appeal their fine. And as soon as the fine is finalized, charged parties will have 30 days to pay, and it remains unclear if entities that do not meet this obligation will lose their operating licences or not.

Gov. DeSantis' fight with schools on Covid-19 protocols has been in full swing since August when infections surged.

In July, the governor instituted a ban on masks in schools across the state, just before school terms started.

However, some schools took the state to court, challenging this and were lucky with the judge swatting DeSantis' ban on masks. He later appealed this decision and won.

During August, few days after schools had opened, this is what unravelled:

Child cases have increased exponentially after declining in early summer, with nearly 500,000 cases in the past two weeks.

The increase in Covid-19 cases among children across Florida can be attributed to kids' return to school.

4. DeSantis is not only fighting schools in court, but he's also suspending their funding

Earlier this month, several media houses reported that the Florida Department of Education had withheld funds from two school districts that made masks mandatory in classrooms this fall.

This was a clear threat from the state to local school boards that required students to wear masks, and as such, they were punished financially.

The penalty applied to two schools in the Alachua County and Broward County district with mask mandates defying the DeSantis' order.

Broward County Public Schools, later on, released an official statement saying that they would continue to enforce its mask mandate for the time being.

Biden's administration advised schools that are stripped of funding due to Covid-19 precautions to use the federal stimulus funds to even out the amount that has been cut by state departments.

DeSantis has been wrong on so many issues regarding the coronavirus pandemic, but he became worse during the wave of the Delta variant.

The governor has long been vocal about his opposition to things like vaccine mandates among the state's population, mask mandates in schools and went as far as signing a bill to make this point.

DeSantis said he was considering options for opposing the mandatory vaccine move from the Biden Administration.

He also argued that trying to force vaccines on reluctant people will stiffen their resistance to getting the shots.

It is alleged that he is purposefully prohibiting mask mandates and discouraging vaccines. People would need the monoclonal antibodies that the federal government has just cut their intake from.

This whole time, the state of Florida has prioritized monoclonal antibody treatment, and these treatments are considered effective if administered early in an infection.

Many citizens and people across social media want to know how the alleged Texas terrorist received a visa to enter the United States, despite reportedly serving 10-years in prison before.

The A.P. news agency has been slammed for "covering for the FBI" after the publication deleted a tweet that said the "taker's demands weren't related to the Jewish community". A screenshot composite of a tweet deleted by the AP.AP/Twitter.

Pfizer has hinted at developing a coronavirus vaccine that will solely be designed to target the Omicron variant, the company has revealed. Pfizer Inc. headquarters is seen in New York City.Jeenah Moon / AFP.

Grant Stern has once again claimed to have been kicked out during a press briefing before asking Governor Ron DeSantis if the state let nearly a million Covid tests expire last week while he was on Christmas break.

Opinion: The court's decision to allow Djokovic to play poses a risk and undermines AU's health

On Monday, an Australian judge ordered that Novak Djokovic be released from immigration detention following the athlete's controversy pertaining to the Covid-19 vaccine. A decision that seems to undermine Australia's health protocols in place to please an anti-vaccination tennis player writes Victor. This opinion piece will dissect the matter.

A report has noted that Travis Scott and his management wanted to keep his Coachella slot due to the fact that his performance was going to be dedicated to Astroworld victims, acccording to an inside source from Variety.

The governor of Colorado has lowered the 110-year sentence of truck driver Rogel Lazaro Aguilera-Mederos in a vehicular homicide case to just 10-years because the tragedy was an "unintentional act".

Over a year ago, Biden said Covid-19 pandemic is a federal problem. Recently, he said it's a state problem

Over a year ago, before United States President Joe Biden took office, he said that the coronavirus pandemic is a federal problem. Recently, the president has come under fire for "changed" views, where he seemed to be placing responsibility on states.

Omicron appears to be spreading faster in the U.S. than in Southern Africa, despite Biden's travel bans on those nations

The Omicron variant seems to be spreading a lot faster in the United States than any of the Southern Africa countries that were hit with travel bans by the White House. Covid-19 travel stock photo.Olya Kobruseva / Pexels.

The Los Angeles Black Lives Matter organization that threw its support behind Jussie Smollett accused the Chicago Police Department of having no respect for the lives of Black people in a report.

Travis Scott's team is yet to confirm the news of him no longer being the main headline act for 2022's Coachella, despite major publications reporting this. Rapper Travis Scott during his 2017 Coachella set list.Frazer Harrison / AFP.

Texas has come under the spotlight for their immigration policy on foreign nationals and how it is being implemented. There are also several issues that have been raised about the way the state is defying Constitution rules.

A few influential Republican leaders have criticized CNN for understating Jussie Smollett's charges on a headline of one of their stories that went viral on Twitter late on Thursday.

Residents of Denver, Colorado, have been left concerned due to no sign of snow this winter, marking over 200 hundred days since the area last experienced flakes. Skiers walked on exposed pavement in ColoradoJason Connolly / Getty Images.

A journalist has spoken out about the backlash that Hulu received for airing the Astroworld documentary, saying that the documentary would have answered questions that the public has on how the deaths happened.

The state of Florida is yet to reveal if the first person who tested positive with the Omicron variant travelled outside the United States or contracted Covid-19 locally. Coronavirus stock composite photo.Edward Jenner / Pexels.

Some of the families of the Astroworld Music Festival victims have reportedly turned down Travis Scott's offer to cover burial costs. Days after ten lives were lost at the tragic Astroworld Music Concert, Travis Scott offered to cover the funeral expenses of all victims, according to a report by Variety.

Online backlash caused the Astroworld documentary series to be canceled

The online backlash that Hulu received is reportedly responsible for canceling the Astroworld Documentary series that the network planned. Astroworld Concert From Hell posterHulu / ABC13/KTRK-TV.