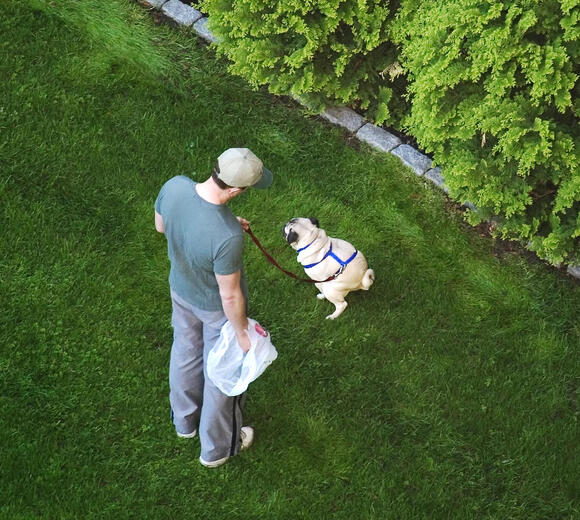 In a most organic sense, doggy land mines have a high stickiness factor. The fresher the stickier.

When these dumps of dung start showing up on our sidewalks and lawns, it is these dog owners who clearly lack a certain mental capacity when they leave ‘it’ there.

Maybe it’s a lack of respectfulness or mindfulness, but it can’t be a lack of awareness. Picture a dog owner looking at their phone and turning their back to the doody deed.

If you’re a regular on Nextdoor (a virtual neighborhood news feed similar to Facebook), sharing this kind of festering doggy dilemma is common.

Though most no one would fault our best friend for doing their biological thing, these particular dog owners are drawing the ire of many and causing side-eyed views for all of us walking our canines.

The answers to circumventing this breach of etiquette are getting creative. But in all cases, it calls for the time, money, and effort of the homeowners or residents – not the offending dog owner.

Ideas such as signs, fences, ultrasonic devices, repellents, motion-activated sprinklers, and even DNA tracing are all additional expenses that can be incurred – unless, you’re content picking up after others.

There are also the limbo areas in neighborhoods that some dog owners can strategically target which are just out of reach of most residents to cover.

Real answers are supposed to come from the pooper-scooper laws, policies, and ordinances where fines are given (varying on your jurisdiction).

Perhaps better answers may come from potential shaming, especially in suburban neighborhoods where catching and policing the offense can be more difficult.

On Nextdoor, for example, there is ample visual evidence already being shared and watchful neighbors ready to pounce.

Of course, security cameras are already prevalent at many homes, but again, homeowners are the ones needing to take the initiative to capture footage and share the offense somewhere.

Some dog owners are going halfway picking up the poop in a doggy bag but finding a homeowners’ garbage bin OR a pile of yard clippings to drop off the dog deuce.

Is dropping off poop like this still considered a faux pas? Most certainly, yes. And most certainly another social overstep.

If one were to quasi-psychoanalyze the offenders, what kind of profile would we get?

There are cases of dog owners dragging or pulling their dog while they’re trying to discharge - one can only wonder what those owners’ lives are about.

There are owners who actually get caught, but play dumb. They just need a reckoning.

There are owners who pretend to pick it up. Go figure.

Then there are those who do the right thing, which use to be normal.

The ultimate question is, of course, how do we deter these offenses?

In San Jose, there’s dialing 311 or the My San Jose App to report these various lower priority issues, but the onus of the investigative work still falls on everyone but the dog owner.

There are also no clear monetary fines in Santa Clara County or the City of San Jose, as there are in other cities, where fines can range from $100 to $750.

The next obvious question for neighborhoods: is it worth the effort?

There are health-related issues that can come into play that can potentially affect people, other pets, yards, the water supply, and so on. So clearly, there are tangible and potentially legal reasons.

Likely, fines should be the best deterrent. It should be made as effective as a vehicle violation and as sticky as fresh scat.

In suburban areas, gathering proof will take a coordinated effort to track the perpetrator, then perhaps a formal submission from the neighborhoods’ association or organization to contact the offender with a warning that ends with a city fine.

At the least, continued and concerted education is needed to tackle the issue or the next step will come where pets are banned from neighborhoods or pet ownership needs further regulations to accommodate the lowest common denominator.

Harsh? - possibly, but not out of the realm of possibility. But who do you think will be screaming most then?

Artist Tyler Gordon at the 49ers game on 1/2/2022 completed activist Dr. Harry Edward's portrait in just 20 minutes.(photo by: Vic Aquino) 15-year-old Tyler Gordon is an art prodigy and an already well-established portrait painter born and raised in East San Jose. When Tyler was 10-years-old, dreams from God “activated” Tyler to spread love and inspiration through his creations.

The Dawn of the Real Internet

In the pursuit to peel back and understand the massive underpinnings to what will change the world in the coming fourth industrial revolution, it was like opening a pandora’s box of wonderment, bewilderment and confusion.

Part one of a three-part Silicon Valley technology series. An earlier Newsbreak article on blockchain and crypto technology offered a broad explanation on how and why the world will experience its next profound change.

As each year goes by and major quakes occur around the world, it shouldn't be a surprise what's on the back of people’s minds in the Bay Area - “When will we get ours?”. 115 years ago on April 18, 1906 at 5:12 AM the infamous 7.9 earthquake that lasted for less than a minute struck dead-aim at San Francisco and forever etched its mark on U.S. history.

The great San Jose Jazz Summer Fest is this weekend - who’s behind it making it all go?

Judith Hill & Common(Images from Jesse Cutler) After the 2020-cancel-everything-year, the San Jose Jazz Festival, a.k.a. the San Jose Jazz Summer Fest, is set to return to its in-person, multi-day gathering of diverse musical acts in downtown San Jose this weekend.

The 7th Street Big Band(photo by: Vic Aquino) When people hear “East San Jose,” usually the first thoughts are unincorporated and underprivileged to put it mildly. For those who grew up there and call it home, there’s an unassuming grassroots feel and a diverse generational timelessness like no other area in San Jose.

A football life, a football wife and the relationships needed for success in everything

Brent & Courtney Brennan, July 2000(image from: Brent Brennan) My first meeting with San Jose State’s new football coach in 2017 was energetic. That first interview was unexpectedly transparent, surprisingly easy and oddly comfortable. Walking away afterwards, I joked to myself that I should check if I still had my wallet.

Whale City Bakery Bar & Grill in Davenport, CA(photo by: Vic Aquino) In the San Francisco Bay Area, we are incredibly spoiled. There’s just an absurd number of things to do that one can get paralyzed with choices.

A serendipitous journey from corporate life to the bread of life

In the Silicon Valley, it’s all about tech-related jobs, great pay and upward mobility. It’s also a place where a lot of dreams go to die, assuming your dream isn’t about climbing the corporate ladder.

San Jose used to be a great ol' sports town. How about some college basketball to get it back?

Back in the 1970s and 1980s, when San Jose had more of its blue collarness, there were memorable sports teams and venues. San Jose Bees baseball in the 70s at the old Municipal Stadium (now Excite Stadium) has sentimental value when remembering baseball-greats such as George Brett, Jay Johnstone, Dave LaRoche and Frank White who found their ways to San Jose.

Will the real mayor of San Jose please stand up?

Raul Peralez is running for mayor of San Jose in 2022. So, why is that important and who exactly is that important to in this city of a million people?. As the current District 3 Councilmember for the last seven years, Peralez made his mayoral intentions known for over a year. His background and body of work make a mayoral run a next logical step in a city where 75% of its people are of color.

San Jose in the wake of a national tragedy

It's the recurring mass shooting nightmare that causes numbing heartbreak. It’s an unacceptable on-going pain. In San Jose on Wednesday, that raw societal wound was reopened again. A nationwide trauma that never heals.

The crazy world of crypto and social good explained to my mom, my wife & friends in the simplest way I could think of

With so much news and activity about "crypto" and its technology for world good, the last dozen or so years have been like the old American wild west. How does one make any sense of the madness of hyper-volatile valuations and supposed environmental indecency, where 99% of the population still has no real clue what’s going on?

What a mother does for her people

(SAN JOSE, CA) - There’s no doubt of the power of a mother’s unconditional love. If only this level of devotion, encouragement, strength, and female perspective were central and consistent for all 7.8 billion people on earth - - the world would experience...

A stadium and a stalwart pay it forward for San Jose

(The first year of Spartan Stadium in 1933. The north endzone in the foreground looking southeast towards Evergreen. Image posted with permission from San José State University Special Collections & Archives)

San Jose, CA - Most people need to be led, organized, and motivated – even the best of us for the sake of the worst of us. With the wave of Asian hate and violence heightened by the previous administration’s incendiary rhetoric, one champion of Asian American civil rights is coming to light in the San Francisco Bay Area.