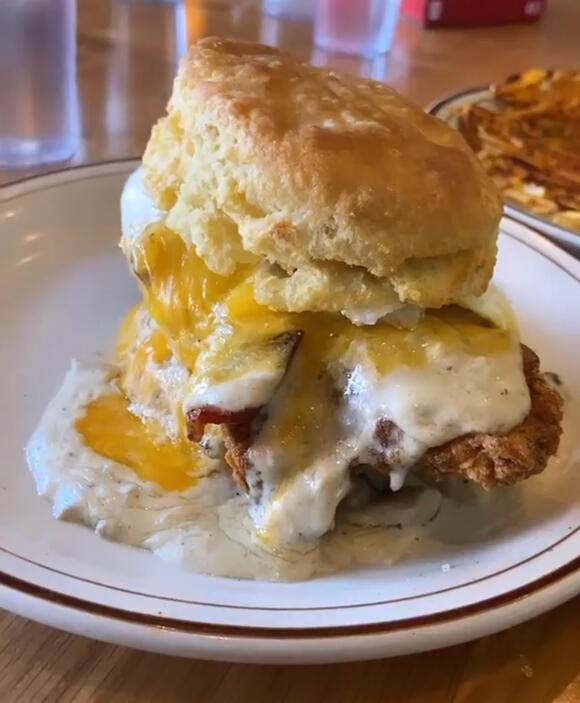 Pine State Biscuits is hands down my favorite brunch place in Portland! It is by far the best biscuits I have had in my life and I am usually not a fan of biscuits so this means a lot. Located in the Alberta District, it's at the corner of an artsy neighborhood with plenty of shops to explore. Across the street diagonally, there is a cute mural photo op where you’ll see plenty of people taking photos against the wall. The way it works here is to order and pay first then grab a table so they can bring the food out to you. This place gets pretty crowded so make sure to go early especially during the weekends around brunch time. I ordered to-go before I headed to Seattle and good thing I did because there was a long line out the door when I arrived. I've tried both the Reggie and Reggie Deluxe and prefer the deluxe version more since there is a fried egg.

Breaking down the Reggie Deluxe, it is an amazing biscuit, bacon, fried chicken, cheese, fried egg with gravy poured down the middle. Talk about the ultimate breakfast meal since it was amazing. I would recommend getting the gravy sauce if you build your own! My friend didn't add the gravy and did not enjoy it as much since the texture was different. As I mentioned above, I am usually not a fan of biscuits or the texture but the combination of this dish was delicious! The fried chicken was perfect - not too crispy or soggy. The fried egg complimented the bacon well. This dish was more on the heavy side but will fill you up for a good while and will even have room for leftovers since it is massive. Even if you don't like biscuits, give this place a try and it'll change your opinion! Pine State Biscuits has a few locations all around the city so depending on which neighborhood you are in, hopefully, there is one near your location to try. I even visited the location at Reno in Nevada and can guarantee the food and taste is consistent even if it is not in Portland!