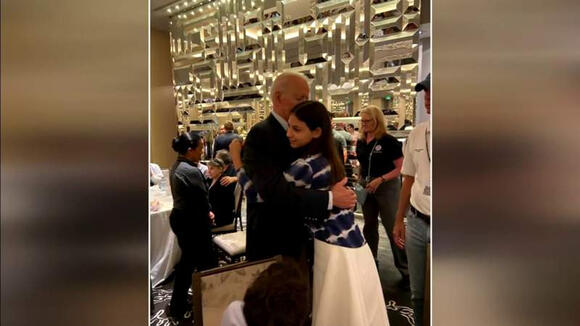 “I love the story. I love her,” said Surfside Mayor Charles Burkett. “We can never forget she is the face of this disaster.”

That face is 12-year-old Elisheva Cohen. She caught the mayor’s attention last week after the Surfside condo came down.

“I noticed she was reading Hebrew and I said, ‘What is that’ and she said, ‘A Hebrew word for prayers,’” Burkett explained.

The story of Elisheva Cohen and the mayor began early on this tragedy when Burkett was touring the collapse site and saw her praying.

Her father, Dr. Brad Cohen, is among the missing.

“I went home, and I felt hopeless,” Burkett said. “There’s got to be more I could do for her.”

Burkett mentioned it a news conference the following day he had no idea who the girl was, but she became the face of this tragedy for him.

One of his police officers tracked down Elisheva, and they met.

“You’re not alone, we are with you and we love you,” Burkett said.

On Thursday, the president came to town. Elisheva had bought herself a dress to meet President Biden, the mayor said, though she wasn’t on the official invite list.

“I said, ‘Mr. President, if you wouldn’t mind, I would like you to at least say hello to her,’” Burkett said. “He looked at me and said, ‘Bring her right now.’”

Elisheva met the president, and the two shared an emotional moment.

Added the mayor: “It’s been several days, and we have become best friends now.”

On the day Elisheva met Burkett, she recited the Hebrew prayers known as Tehilim, or the Psalms of David. One of the prayers is the Lord is my Shepard, even though I walk through the valley of the shadows of death I will fear no evil.