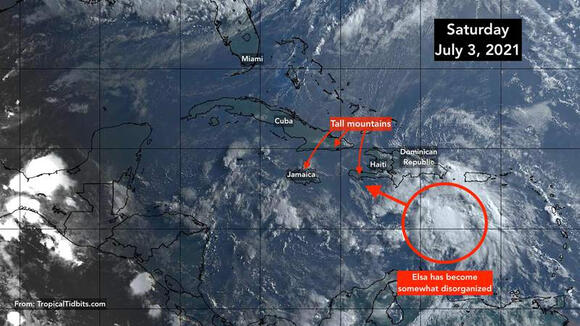 Elsa is becoming disorganized, but can it stay that way?shuttershock

Hurricane Elsa continues to fly through the Caribbean on its way to the waters south of Haiti and eastern Cuba. This morning, it’s speeding along at 31 mph, one of the faster movers in the tropics in memory.

Fast-moving storms normally have trouble hanging together because the upper and lower parts of the system eventually get out of sync with each other. In the case of Elsa, the storm lined up well enough yesterday for it to blow up into an 85 mph hurricane, but now the system has become somewhat disconnected.

Hurricane Hunters are investigating the storm this morning. If trends continue, Elsa might drop down to tropical-storm status. But we’ll have to wait and see.

If it stays somewhat disorganized for another day and runs into the mountainous terrain in Haiti and/or eastern Cuba or Jamaica, it will probably not be able to recover into a strong storm when it gets into the Straits of Florida or the Gulf of Mexico. If, on the other hand, it reorganizes into a vertically stacked, solid circulation later today, it would have a better chance of surviving its trek over the northern Caribbean islands and be more formidable when it’s in the vicinity of Florida.

Most of the most reliable computer forecast models show a fairly weak storm emerging near or west of the Florida peninsula, but not all. The evidence is not conclusive.

So the big question is, what shape is the storm going to be in tonight or tomorrow morning as it’s approaching the high terrain of the large, mountainous Caribbean islands?

Since the extreme forward speed seems to be the main source of Elsa’s disorganization – the bottom part of the storm is pulling ahead of the top part – what will happen when it starts to slow down later today and early tomorrow as forecast? Some dry air in the Caribbean might also be gumming up the works, which would be a welcome secondary thorn in its side. On the other hand, the Caribbean waters are very warm.

The upper-level wind pattern appears conducive for Elsa to reorganize IF, and it’s the big if, it can pull itself together before running into the tall mountains in Haiti and Cuba. Disorganized storms need time to re-coordinate their parts, so it looks like a bit of a race. The dry air might be the wild card that slows down the process.

For now, everyone in Florida needs to stay vigilant. The National Hurricane Center forecast of a strong tropical storm is something of a middle ground with reasonable, imaginable possibilities on either side. The storm could be stronger in the Gulf or near the Keys, or significantly weaker. It all appears to be dependent on what happens today and tonight.

And it’s important to note, if the NHC hits the forecast right on the nose, a 65-mph tropical storm is nothing to sneeze at for areas that are impacted by the peak winds and rain.

The National Hurricane Center will likely issue a watch for some part of southern Florida later today.

Remember, don’t just focus on the cone. Even if the storm is fairly weak, the bad weather will extend a good ways to the east – outside the cone on the right side. And there’s also a chance of course that the storm center will venture outside the cone.

It’s too early to dismiss Elsa as a potential problem. Be sure to check in over the holiday weekend until we have more confidence what shape Elsa is going to be in after it crosses over Cuba.