California's Willow Fire has scorched nearly 3,000 acres since igniting last week and evacuations and concerns mounted Tuesday in and beyond Monterey County.

"Cooler temperatures and an increase in relative humidity today has given firefighting resources an opportunity to initiate a direct attack on the eastern edge of the fire at Marble Creek Trail as well as continuing to strengthen contingency lines around the fire perimeter," the agency wrote.

Evacuation Warnings and Orders were issued for the surrounding regions and Monterey County Weekly reported that 100 homes and 25 commercial buildings were threatened by the fire. 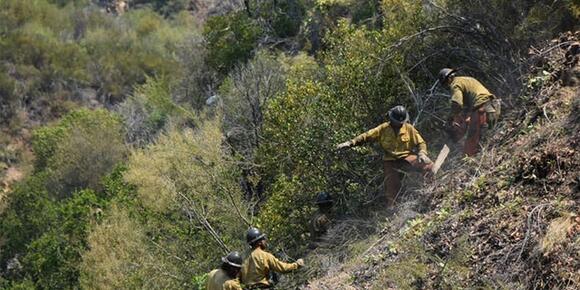 "Moderate to active fire behavior is expected toward Arroyo Seco, as well as northerly and southerly spread due to slope runs. Firefighters on the ground are making a strong effort to stop further spread to the north and west flank of the fire line with the assistance of air support," the statement read, also noting that crews are continuing to prepare for structure defense in the Tassajara Zen Center and the Arroyo Seco campground area and have been scouting ridges where previous fire control lines were built to possibly utilize them again.

The cause of the fire remains unknown.

Amidst wind gusts of 35 mph, the fire grew overnight on Monday, fanning the flames down-canyon into Lone Pine Creek and triggering additional evacuations of residents at Olivas Ranch, Whitney Portal Reserve, and all residents on Whitney Portal Road North of Horseshoe Meadow Road.

According to an incident report from the Inyo National Forest U.S. Forest Service, a Type 2 Incident Management Team was on order to take over the incident on Wednesday and the fire went into Unified Command with CAL FIRE due to the threat to structures and state lands.

An aerial effort and "Air Attack" was planned for Tuesday would retardant drops and multiple roads and trails were closed to the public.

The Whitney Portal trailhead, known as a popular route to Mt. Whitney – the tallest peak in California and the highest peak in the contiguous U.S – was one of the trails closed.

New York prosecutors are busy reminding us that the most surefire way of nailing Donald Trump for his crimes is to begin by nailing his underlings and associates for their related crimes. Similarly, if the DOJ does end up bringing a federal criminal case against Trump, it’ll surely be preceded by the arrests and convictions of people who can be made to flip on him.

Few anti-Trump voices have been more vindicated than Michael Cohen. His claims during his 2019 testimony to Congress ended up serving as the basis for a New York criminal investigation that’s now begun bringing indictments against the Trump Organization. And his 2020 book “Disloyal” has become a New York Times number one bestseller. Now Cohen would like to remind everyone that the Trump administration went to extraordinary – and abusive – lengths to try to stop him from publishing it.

Even Fox News is now running disclaimers against Donald Trump

Fox News ran the following disclaimer in all CAPS while airing Trump’s C-PAC speech Sunday in Dallas, leaving no doubt they are well aware his claims that the election was fraudulently stolen are hogwash, and proving they have grave concerns they will lose pending lawsuits against them, or have to pay some very hefty settlements: “The voting system companies have denied the various allegations made by President Trump and his counsel regarding the 2020 election.”

Sometimes, we make certain assumptions about young people, one of which is that their elders know better. That is not always true, and we need to take time to listen to young people. Proving that point, 17-year-old Kyle Huang recently schooled the Texas legislature on their new restrictive voting laws according to Daily Beast.

When members of a high profile family find themselves accused of being a crime family, they usually try to at least publicly stick together – no matter what they think of each other – in the hope of collectively surviving the deluge. When things unravel to the point that they begin sniping at each other and scapegoating each other through the media, it’s a surefire sign that they fear some or all of them are going down.

Although it doesn’t get nearly the same media traction as the legislation passed by Congress that he formally signs at his desk, President Biden’s executive orders so far have been pretty significant at changing American lives for the better. Today, he signed a pretty important one that could bring back net neutrality which the FCC repealed back in 2017 – making the internet a more competitive playing field for the U.S. economy.

Now that the White House has largely returned to normalcy and media efforts to spin non-events into Biden scandals are laughably going up in flames, they’ve largely turned to the drama in a 50-50 Senate with as much legislation as they possibly can. The problem is that the stories about the Senate and Congress in general tend to play “both sides,” that both Democrats and Republicans are equally responsible for the gridlock and failure to work together, despite the numerous instances that prove one side is considerably more responsible than the other when it comes to not wanting anything done. Mitch McConnell has openly admitted his dedication to obstructing the agendas of not one but two Democratic presidents, regardless of how beneficial the agenda is to the rest of the country.

LOS ANGELES—The California Department of Transportation paid more than $13 million to have security at 120 vacant homes, Fox 11 reported exclusively. The report said Caltrans paid $9 million to the state’s highway patrol from November to April and another $4 million to a private security firm for five months. Caltrans told the station in a statement that the homes were purchased 60 years ago when the state wanted to connect the 710 freeway to the 210 in Pasadena.

Georgiadeputies captured a suspect in connection with a triple homicide at the Pinetree Country Club in Cobb County last week that left a golf pro and two out-of-state men dead.

US launches airstrikes on facilities used by Iran-backed militia groups on the Iraq-Syria border in response to drone attacks. Strikes were launched by US military Sunday night, and targeted two facilities in Syria, as well as one in Iraq.

(CNN)E-cigarette company Juul Labs will pay $40 million and make changes to its business practices to settle the first state lawsuit that alleged it marketed to teens, North Carolina state attorneys announced on Monday.

(CNN)At least 159 people were unaccounted for Friday, a day after the collapse of part of a 12-story residential building in Surfside, Florida, authorities have said. Search and rescue teams have been feverishly scouring the site since shortly after 55 of the building's 136 units fell. Four people are dead, officials have said.Here's what we know about the missing.

A 'heroic' man who fatally shot a gunman was himself killed by a responding officer, Colorado police say

(CNN)The man hailed as a hero for preventing further bloodshed after a gunman fatally shot a police officer in Arvada, Colorado, on Monday was himself fatally shot by police, Arvada police said in a statement Friday afternoon.

Sen. Hagerty says Harris’ trip to El Paso only happened because of ‘backlash of public opinion’

GOP senator Bill Hagerty on Friday blasted President Biden for turning the border ‘into a turnstile’, and said Kamala Harris‘ visit to El Paso only happened because the administration was faced with a ‘backlash of public opinion’.

This Iowa county used to be named for a slave-holding former vice president. Now, it's named after a Black academic

Derek Chauvin sentenced to 22.5 years in death of George Floyd

(CNN)Derek Chauvin, the former police officer who killed George Floyd on a Minneapolis street last year, was sentenced Friday to 22 and half years in prison. Chauvin, in a light gray suit and tie and white shirt, spoke briefly before the sentence was imposed, offering his "condolences to the Floyd family."Under Minnesota law, Chauvin will have to serve two-thirds of his sentence, or 15 years -- and he will be eligible for supervised release for the remaining seven and a half years.The sentence exceeds the Minnesota sentencing guideline range of 10 years and eight months to 15 years for the crime. Floyd's death sparked massive protests across the nation over police brutality.Judge Peter Cahill said the sentence was not based on emotion or public opinion. He wanted to "acknowledge the deep and tremendous pain that all of the families are feeling, especially the Floyd family," the judge said.In a 22 page memorandum, Cahill wrote that two aggravating factors warranted a harsher sentence -- that Chauvin "abused his position of trust or authority" and treated Floyd with "particular cruelty." Chauvin, the judge wrote, treated Floyd "without respect and denied him the dignity owed to all human beings."

Miami building collapse: Woman, 64, living in condo was woken by ‘creaking noises’ the night before

A 64-year-old woman missing in the Miami condo tower disaster had told her son she was woken by ‘creaking noises’ in the building the day before it collapsed. Pablo Rodriguez told CNNThursday that his mother had complained the noises had been loud enough to wake her up at around 3 or 4am.