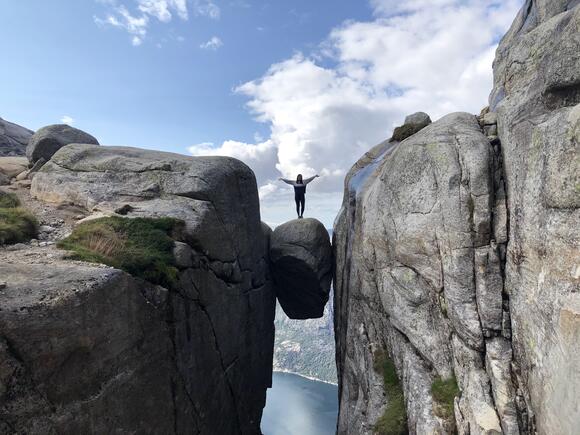 Close your eyes and spend 30 seconds now to think about your boldest moment in life so far. What comes to your mind? To join a competition and sing in front of the crowd? To travel solo? Or to move to a new city and live in a completely new environment? My answer would always be the two signature extreme hikes in Norway, Kjeragbolten and Trolltunga. Sometimes when I do a little throwback in my album, I recall how bumpy the routes were, how sore and shaky my legs were when we were walking on the steep descent and how not to panic while still posing with a smile on the rocks. These hikes are on the bucket list of many, and I am so glad to have the two boxes ticked when I was on my exchange in which too many adventures were once-in-a-lifetime. Now follow along the virtual National Geographic and I bet you all would have two more items on your own bucket list!

11km long, the hike for a round trip usually lasts for 6-10 hours depending on your speed. But you should always set off early to ensure that you have more than enough time to finish before sunset. There are 3 steep peaks to go over before reaching the Kjerag where you have to pull yourself up with the help of wire at the side. With the perfect weather in Late-August, never have I seen such majestic views of mountains, canyons and lakes. I guess photos speak better than words so here you go!

Before going to Kjeragbolten, I have done some research and seen hundreds of photos of hikers on the tiny rock in between the two huge rocky blocks. But when it was my turn to be there, I still could not believe my eyes that the endless fjord was just right below where I was standing. It actually took me quite some time to slowly sit down on the rock with my eyes staying only at my eye level. It is gonna scare you to death if you look down from 3556 feets above sea level. I did not dare to stand up at first but then I told myself that this might also be my last time to be there so do something with no regrets. Bring up your courage and claim your moment! No matter what challenges are coming in the future, whenever I look back to my boldest moment in life, that is not a big deal anymore. Anyway just be extra cautious as a careless step could probably...that’s terrible><

The more demanding hike came after a rest day in between the two hikes and that was the one to Trolltunga, the most famous and popular trail in Norway due to its spectacular cliff and incredible fjord. It took us 11.5 hours to complete the 28km journey including some photo time. We set off as early as 7am to avoid a tight schedule when we were getting downhill. Although it was around 5 degree celsius, we just brought with us a thin down jacket and a wind-proof one. I would suggest bringing as light as you could and you would thank yourself when you kicked off with the steepest zigzag path. Not only were there clear signs and instruction boards guiding you throughout the way, but you would also notice how far you have gone every 1km. Mind your balance as the road is even more bumpy with a lot of grained gravels. 6 hours gone and we finally got to see the Troll’s tongue...and the crowd. Yes, you have to queue for the pictures which is a must while we spent around 45 minutes there. It is generally safe to take photos on Trolltunga but just do not do dangerous poses near the edge of the cliff as I have heard about the accidents there in the past as well.

It’s a pity that the weather that day was not as good as the day in Kjeragbolten. But God brought us surprise as always! Look! When we were on our way back, the clouds gradually scattered with the amazing silver lining and the mirror-like reflection of the sky appeared on the surface of the fjord just like this. I couldn’t be more grateful to have seen it with my eyes!

But if you don’t have sufficient time for both hikes, I would indeed recommend Kjeragbolten between the two. The stunning views along the way to the rock are simply too impressive, looking back to the canyons and valleys after climbing on a steep slope, standing in the middle of nowhere and seeing flawless reflection of the sky on the shallow water. Weather is perhaps the most important factor though. The route of Trolltunga may look better if the sky was not that cloudy and moody that day. When talking about the level of danger on the two rocks, Trolltunga is a much safer choice as the rock is rather wide and thick. Whenever I see photos of myself standing on Kjerag, in which the fjord was right down there, holding up my hands in the air, I think ‘how dare I!’ I still couldn’t believe I made a courageous move and you probably would not see me there for the second time again haha

For those who are ready for the challenge, make sure you make the trip in June to Mid-September which is the best hiking time while the trails would be closed starting from October due to the freezing temperature and snow condition. Wear enough to prepare for the weather changes and bring along with you enough water and food to reboost your energy. Do some regular exercise or workout training before going on the hikes as they are quite demanding to be honest. Don’t bite off more than you can chew!

Is Perth Really Only a Quiet Place for Retirement? Check Out the Best 4 To-Gos to Have Your Answer!

Just coming back from Bangkok, I was telling my best friend I was going to fly to Australia the next week. ‘OMG! Are you going to Sydney or Melbourne?’ ‘Nahh, I am heading to Perth where it is the opposite in the west side instead.’ ‘Oh really?! Just Perth? But you must be having a long trip this time!’ ‘Umm…unfortunately not. Just for 4 days.’ ‘Are you kidding me? You're gonna have an almost-8-hour flight to spend just 4 days there?’ Recalling this exact conversation during the wild summer in 2019, you can tell how much I am into travelling as well as how desperate I am right now without flying here and there. Being my first time going to the Southern Hemisphere, I looked over and over for travel guides and blogs related to Perth for a better itinerary. Scrolling through a few pages, the majority of the comments were about Perth being a hushed city for you to enjoy the slow living pace and you won’t need a long time to explore around as tourists. Is that true? Perhaps you can make a better conclusion after reading about my journey.

Exploring Home Series: One Day Mini-Getaway from All the Hustles and Bustles in Hong Kong

Exploring somewhere new around your home city has been the only fun time during the year with masks and rounds of anti-Covid measures for all of us around the globe, or at least for me in Hong Kong. Before this pandemic, rarely did I really take time to appreciate and discover the hidden beauty of this small busy city when I put my focus on all the hustles and bustles, tremendous pressure and fierce competition in both studies and career. Known for its fast pace of living, I decided to do the opposite which is to slow things down and plan some relaxing day trips with my friend. Getting pleasure from enjoying the slow steps and moments is absolutely my definition of a getaway. If you are ready for a little tour to take a look at another side of Hong Kong, just follow along!