2 Books that will change your life 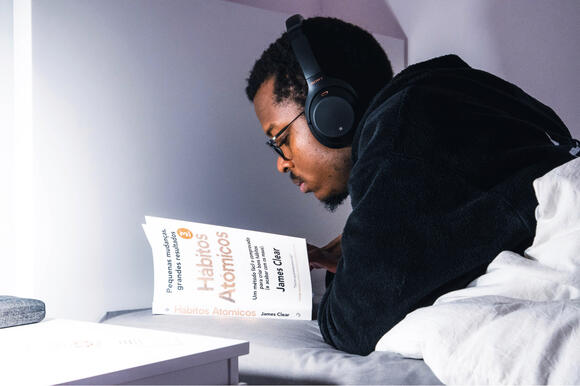 Photo by Nubelson Fernandes on Unsplash

It seems that every day we are exposed to more and more people providing "the fix" to all our problems.

I too have fallen a victim to the idea that all the problems in my life would go away if I could just find that ONE special trick that all successful people do.

I have downloaded apps, copied morning routines, and read countless books. All in the name of progress. And what did I find with all this research and work?

If anything I felt worse for having tried and failed. Maybe it was just me and I was doomed to be a failure?

It was at my lowest point that I stumbled across two books that were radically different from all the others. Books that, sure, claimed to have the answer, but promised it wasn't what you thought.

Having nothing to lose I gave it a try and was surprised to find they were right.

No two books have so radically changed my view on life and the world around me. No books have forced me to take such responsibility for my life like these.

Photo by Indrajeet Choudhary on Unsplash

The Subtle Art of Not Giving a F*ck: A Counterintuitive Approach to Living a Good Life

Starting as a simple blog post that grew into a book and an entire movement. Mark Manson's book took the world by storm when it was released.

Giving to me by a friend who could see I was going through a rough time, I sat down to glance at it and ended up reading it from cover to cover.

In a hilariously vulgar and engaging way, Mark discusses that learning to not care so much is the way to be able to care about what matters most more. It was the first foray into the idea of truly prioritizing what precious time you have on this earth.

Another very jarring and ultimately beneficial idea that Mark introduced was that it was better to not believe you are special.

Mark says it best below

“My recommendation: don’t be special; don’t be unique. Redefine your metrics in mundane and broad ways. Choose to measure yourself not as a rising star or an undiscovered genius. Choose to measure yourself not as some horrible victim or dismal failure. Instead, measure yourself by more mundane identities: a student, a partner, a friend, a creator. The narrower and rarer the identity you choose for yourself, the more everything will seem to threaten you. For that reason, define yourself in the simplest and most ordinary ways possible. This often means giving up some grandiose ideas about yourself: that you’re uniquely intelligent, or spectacularly talented, or intimidatingly attractive, or especially victimized in ways other people could never imagine. This means giving up your sense of entitlement and your belief that you’re somehow owed something by this world.”

The knowledge that you aren't special can be difficult to accept at first. But once you got over the initial shock, it becomes the ultimate motivator to work harder and longer than the person next to you.

The effect has been life-changing.

Photo by Nubelson Fernandes on Unsplash

Another book that just melted my brain when I first read it.

I had been following James' weekly email for years so it was a no-brainer to give his book a shot. What I got was the single greatest blueprint for how to achieve the life I always wanted. If I had the patience and perseverance to achieve it.

James breaks down the science behind human habits and how they more closely predict a person's success than any other metric.

He then goes onto explain why most people fail at their attempts to better themselves.

“The greatest threat to success is not failure but boredom. We get bored with habits because they stop delighting us. The outcome becomes expected. And as our habits become ordinary, we start derailing our progress to seek novelty. Perhaps this is why we get caught up in a never-ending cycle, jumping from one workout to the next, one diet to the next, one business idea to the next. As soon as we experience the slightest dip in motivation, we begin seeking a new strategy—even if the old one was still working.”

Not being content to just point out a problem and not provide a solution. James lays out the structure and framework to slowly correct your habits and change the direction of your life. From the slow downward-spiral, we all know, to a lifelong project you can be proud to watch bloom.

Throughout the book, James provides real-world examples and historical accounts. Not only to educate you but to motivate you to keep trying when faced with adversity.

Atomic Habits helped me understand that it is the little things I do again and again that define who I am, more than the occasional grandiose gesture.

It has helped me lay out the structure for how to improve my life and provided me with a deep understanding of why it is so important to do so.

This I'm sure will keep me motivated for decades to come.

Best books to be more productive

There are a plethora of books on becoming more productive. So many in fact that people procrastinate deciding on a book to read on procrastination!. Over the years I have read dozens and dozens of these books. Although they all present roughly the same ideas, there are still a few that I think are a cut above the rest.

The top 5 Legend of Zelda games of all time.

Zelda turns 35 this year. 35 years since Nintendo introduced that little elvish boy with his green hat to the world. 35 years since the world of Hyrule took over people's lives and I argue, changed the world for the better.

Should you sleep on the floor?

Like most people, I have been ever so slowly but surely realizing I'm getting older. That pesky, never-ending tide of aches and pains that building up and slowly making my life hell.

Why I don't wear shoes

I have a confession to make. I'm a no-good barefoot hippy fighting the man and sporting questionable bathing habits. But the barefoot part is true. For the majority of my early life, I wore shoes nearly every day, but now that I am older I choose to wear them less and less.

Blast from the past: classic games worth replaying

The video game industry is going through a golden age. There have never been so many great games and the quality seems to be getter better and better every year. The problem is I'm getting older.

Friend or Foe: Has Your Friendship Become Toxic?

Friendships are the icing on the cake for most parts of life. They are crucial to your mental health and help you live longer and happier lives. But what happens when your friendships no longer seem to serve you?

Get Help! Why You Should Consider Therapy

Nowadays, there is a lot of talk about therapy. People choose to have therapy for various reasons and there are many benefits to it. Seeking therapy does not state you are troubled. It has become more common for people to have therapy even if it's just to have somebody external to chat with. I'm a firm believer that it's good to seek help and guidance when struggles come your way. This means you are taking a proactive approach to your well-being. Anyone and everyone can enjoy therapy. Whether you're in therapy or considering it, hopefully, the below will highlight some of its benefits.

Unconditional Love: Why Dogs Are a Man's Best Friend

Everyone knows dogs are man's best friend. You will only truly appreciate what this means if you've ever been lucky enough to have one. They have been our faithful companions ever since they formed a bond with us knowing we’d feed them if they stuck around long enough.

Not to brag but over the last year, I have become a bit of a film buff. Countless hours sitting in front of the T.V. have allowed me to watch pretty much everything that NetFlix has to offer. As well as HBO, Disney Plus, and dare I say it, any pirated copies I could get my grubby desperate hands-on over quarantine.

Rejected! How to handle failure in business and life.

It seems that as I get older, I start questioning what I know and what I've been taught more and more. One particularly big blind spot is that school never taught us how to deal with failure.

A year in review: Biggest Lessons Learnt in 2020

2020 will be the year we will remember for the rest of our lives. Twenty years from now, we will be telling our children what we did in 2020 and who we were. We will be talking about how the "great pandemic" changed our lives and how we adapted to it.

Feeling stressed out? Sad? These movies will help you smile

Life is stressful and in today's crazy world, it's easier than ever to feel overwhelmed. There is a multitude of self-help books, positive mantras, and introspective journals out there. But, sometimes these are too much or not quite enough, to get you through those tough days.

Stranger than Fiction? Movies based on true stories

The temperatures have dropped and it has become the season of couch cuddles and movie marathons. After a crazy year of watching more movies than you ever thought possible, choosing what to what on your movie night might be harder than ever.

4 things I learned from polyamorous couples

Let's just start with a disclaimer right off the bat. I have never been, and I will probably never be. So why would I write about something that I've never practiced?. Over this crazy topsy turvy year, I've made big strides to challenge as many long-held beliefs as possible.

What to do when you fear connection

For the past few months, I have been dealing with a difficult and at times toxic relationship. It can completely crush your ego and force you to look at some of the darkest parts of your soul when times are tough...

My dog is a lifesaver during this pandemic

Well, we are all still here. I'm not here to argue the merits of locking down or not locking down. I'm not going to push my personal views on the safety or necessity of getting vaccinated. I definitely won't bore you on the economic cost of this whole disaster.

3 tips to cope when you are about to breakdown

Let's face it, COVID is taking its toll on the world. Whether it's from the constant fear-mongering over the infection rate and death toll. Or the realities of your business or career-ending due to forced shutdowns.

When to let a relationship go

We were born in a time of Disney, fairy-tales, and happily-ever-afters. This makes it seem like a massive failure whenever we have to end our forever-afters. The social pressures to succeed at any cost have crept into every aspect of our lives. But it has no place in your personal life. If you let it take root, it will rot your relationships at their core.

Failed! I broke my Keto Diet...

Well, as with all my good intentions, they've collapsed like a house of cards. But what started as a reward for my birthday, extended into a birthday "week." and has taken on a life of its own.