DeSantis to Meet with Top Donors After Reelection Win 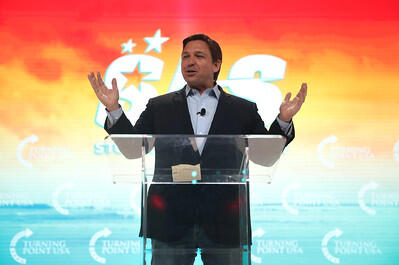 After an impressive reelection victory, Republican Florida governor Ron DeSantis is meeting with some of his top donors before the end of the year as he plots his plans for the future.

According to some people familiar with the details, invitations addressed to the governor’s “strongest supporters” were given this week for an “intimate dinner” on Sunday in Miami with DeSantis and his wife.

A DeSantis campaign spokeswoman refused to comment on the details.

However, one thing is certain. After DeSantis, Florida is no longer a swing state.

Reliable sources said the dinner, which was the governor’s first known meeting with donors since the midterm election, is not explicitly about the 2024 presidential race. Rather, the gathering aims to celebrate the recent win of DeSantis and discuss the plans for the future.

DeSantis clearly said in his victory speech that his path would lead to the national stage, using Florida as a model for the rest of the country.

“The survival of the American experiment requires a revival of true American principles,” he said. “Florida has proved that it can be done. We offer a ray of hope that better days still lie ahead.”

DeSantis may attempt to use the more than $70 million left in reserve from his reelection campaign for a presidential run. With more than $200 million raised between his campaign committee and a PAC that was associated with him, he solidified his position as the most effective fundraiser for his party this season.

Among his top contributors were Ken Griffin, the founder and CEO of the hedge fund Citadel, who gave $5 million, and Robert Bigelow, the owner of Budget Suites of America, who gave $10 million.

Do you want DeSantis to run for president?

Do You Want Florida Democratic Party to Survive?