Do You Want DeSantis to Become Time Person of the Year? 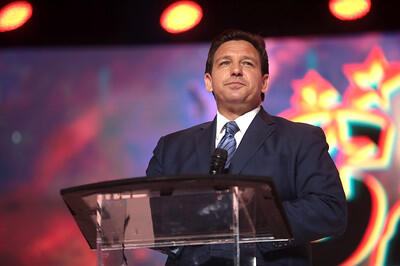 Time magazine announced Monday that Republican Governor Ron DeSantis is being considered for their Person of the Year award.

Last year, the said award was given to entrepreneur Elon Musk, the world’s richest man. Donald Trump had his moment on the cover of Time in 2016. And George W. Bush held the title twice, in 2000 and 2004.

Time is set to announce the 2022 Person of the Year on Wednesday, December 7.

DeSantis’ efforts to limit LGBTQ rights in schools across Florida and his recent impressive political win have captured the attention of the magazine’s editors, making him one of the few people who they felt had the most influence on the world this year.

Every year since 1927, TIME magazine has selected leaders, activists, celebrities, and epidemic fighters to be featured on their front cover, highlighting their impact on the world.

During the height of the COVID-19 outbreak, DeSantis made a shot into the national spotlight and hasn't left it since then, establishing himself as a prospective presidential contender and one of the most well-liked Republicans in the country.

DeSantis' victory in the midterm elections further fueled speculation of him as the GOP's future leader. He won against Democrat Charlie Crist by a margin of 19 percentage points despite the red wave failing to materialize nationwide.

After promoting policies that have energized the GOP base, DeSantis is regarded as former president Donald Trump's most formidable prospective opponent for the GOP presidential nomination.

This year, Trump did not make it on the list of TIME magazine.

Do you want DeSantis on the cover of Time magazine this year?

Do You Want Florida Democratic Party to Survive?