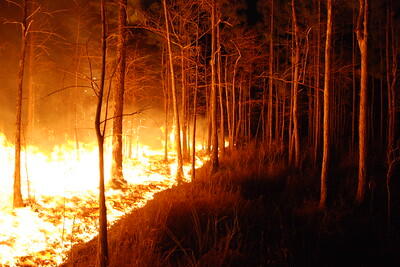 Photo byPhoto by: US Fish and Wildlife Service Southeast Region

The Sunshine State seems to hardly get a break from extreme weather events.

Despite two devastating hurricanes that ravaged Florida in 2022, the elements are aligning for parts of the state to suffer more wildfires in 2023.

There is a probability of above-average wildfire potential to start in the new year along the Interstate 10 corridor and include the northern Peninsula and Southwest coast in the spring, according to the records recently released by the National Interagency Fire Center.

Along the I-95 corridor, the potential of active wildfire conditions is also anticipated to move further north and affect the coastal lowlands of Georgia, South Carolina, and North Carolina.

Around 80 percent of the nation is currently experiencing either abnormally dry or drought-like conditions, but thanks to long-range climate outlooks, forecasters can focus on driving attention to regions where drought relief does not appear likely in the coming months.

Droughts and the issues they bring forth are nothing new to the Sunshine State. According to emergency management, Florida experiences roughly 4,000 wildfires a year, destroying some 200,000 acres.

Severe droughts are currently weighing over much of the Florida Panhandle and seem to be expanding each week.

According to U.S. Drought Monitor, crop losses are anticipated, there are often water shortages, and water restrictions are imposed during a severe drought.

Communities at risk with these conditions include Pensacola, Panama City, and Tallahassee.

Meanwhile, a rare "triple-dip," La Niña, is currently affecting the entire planet and is anticipated to continue into 2023.

Until a significant weather pattern change provides for better rainfall prospects in the Southeast, the combination of already dry conditions and an anticipated lack of rainfall is predicted to increase fire hazard levels.

What do you think about the extreme weather events in Florida?