Gearing up for 2024? DeSantis to Release Autobiography in February 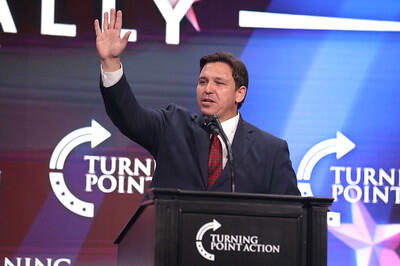 Do actions speak louder than words?

Florida Governor Ron DeSantis is set to release his autobiography in February next year amid speculation that he is preparing for the 2024 presidential campaign.

DeSantis denies his ambition to run, but he’s acting as if he might go for it.

According to a reliable source, the autobiography of the Republican governor is due to be released on February 28. It will be titled “The Courage to Be Free: Florida’s Blueprint for America’s Revival.”

DeSantis became more popular within the Republican Party during the COVID-19 pandemic when he crafted a response in Florida that repudiated lockdown restrictions and vaccine mandates.

His landslide reelection victory against Democrat Charlie Crist strengthened his status as a potentially serious candidate for the GOP presidential nomination.

The book will be published by Broadside Books, a conservative imprint of mega-publisher HarperCollins, and is recently listed on the publisher’s website.

According to HarperCollins, the book would provide readers with a detailed account of DeSantis’ upbringing “in a working-class family, playing in the Little League World Series, working his way through Yale University and Harvard Law School, [and] volunteering for the Navy after 9/11 and serving in Iraq.”

“Everyone can see Gov. Ron DeSantis is a brilliant leader, and now people will learn he’s also a gifted writer,” Broadside vice president Eric Nelson told the publication. “His book describes how he applies his sense of True North to life and leadership.”

The release of the autobiography coincides with the publication of new books by several potential 2024 Republican candidates, including former vice president Mike Pence and former UN ambassador Nikki Haley.

Publishing an autobiography is a common way candidates promote themselves. These books offer an intimate glimpse into their early lives and how candidates plan to tackle them. It’s almost a CV for the presidential office.

What do you think about DeSantis running in 2024?