Every year Apple releases a new product. Be it a new iPhone, iMac, or an iPad, like clockwork the product ends up on shelves around the globe. Every year that this happens, you’ll also find scores of people queuing outside shops to get their hands on these new shiny goodies.

Now you may be thinking what’s wrong with this. If someone wants to buy a new phone or laptop what’s wrong with that? On the face of it, nothing. They can do what they want with their time and money. But you and I both know that this money could be put to better use.

Is spending $1000 on a brand new phone a good idea? Especially, when it will be replaced by a new one 12 months later? I don’t think it is.

Unless your phone still plays snake or the battery dies after a few hours after a full charge, then you probably don’t need a phone, you just want one. That’s a big difference that’s crucial to understanding consumerism.

We don’t need most of the products we own, we want them. We see the glossy adverts and all the brand new features these gadgets have and think how much better our lives would be if we had them.

Then something funny happens. We buy these products, fall in love with them for the first few days. Once this honeymoon period is over, we see them as just another item, rather than the technological marvel we thought they were.

The simple truth is that the money you’re spending on the latest and greatest gadgets could be better allocated. If you’re willing to drop $1500 on a new laptop, but you’re not willing to invest the same amount into the company that builds those laptops, you’re doing it wrong.

Before we go any further, it’s important to illustrate the difference between a liability and an asset. Without this distinction, your efforts to create financial freedom for yourself will wither away.

A liability is something which costs you a lot of money upfront but offers little value in the long run. Think of a brand new car. Driving the car out of the showroom costs you money. You’ve already lost around $2,000 plus from the value of the car from this simple act.

Unless it’s a Ferrari or a Rolls Royce, they’re almost guaranteed to haemorrhage money as the years go by.

By contrast, an asset is something that appreciates in value long after you buy it. A house is a perfect example. My parents bought our house in England for around £35,000 back in the early 90s. Nearly 30 years later and that same house, bar a small extension, is now worth upwards of £200,000!

That is incredible value for money. Sure, the asset isn’t liquid, but as they have no mortgage, that represents a significant financial gain. Stocks, commodities such as gold are also considered to be assets.

You only have to look at the graph of Apple’s share price since the company was founded, to see how much value has been added since they went public in 1980. 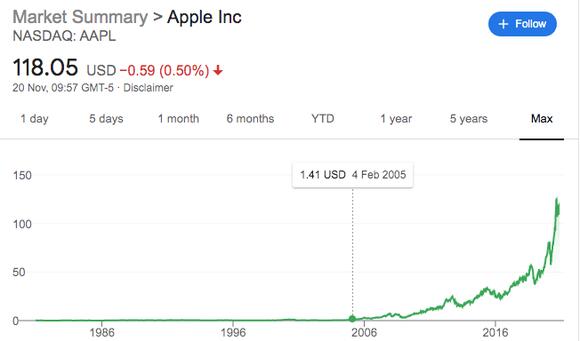 The upwards trajectory of Apple stock.

This is what the average person fails to consider when they rush to buy the latest gadget. As good as it might feel to splurge on a brand new phone or laptop, unless you’re also investing your money in assets, you’re effectively throwing your money down the drain.

No company is guaranteed to stick around forever, but even the most bearish of investors would agree that if you put $1,000 into Apple today, that would return a handsome profit by 2030. Instead, if you put that money into a depreciating asset such as a new iPhone, all you’re doing is handing money to the company for instant gratification with no long-term payoff.

When your perspective shifts in this way, the way you think about money will change forever.

All you need to know

Look, I know this article might come across as encouraging frugality, but that’s not what I’m suggesting. If you’re earning decent money, say upwards of $5,000 a month, by all means, buy a new iPhone if you want. If you’re investing at the same time, then you can spend your money how you please.

The people I’m targeting are people like myself. Up until recently, I didn’t invest at all. While I didn’t spend big on new gadgets, I wasn’t investing in my future either.

The problem with this is that when you do buy a new phone or car, you’re no better off than you were a few years ago. You’ve missed out on the compound interest you would have earnt if you had started investing earlier.

Investing is a long game. You have to delay gratification years into the future. This can be difficult when you hardly see any movements on your portfolio or savings accounts. This is where the temptation to splurge on items that offer little long-term value becomes too much and we cave in.

We’re not great at appreciating just how much power interest can have over the long-term. Warren Buffett, the legendary investor known as the oracle of Omaha, made 99.7% of his personal fortune after the age of 52! That’s how powerful compound interest is.

Look at it this way, the money you invest now will secure your financial freedom in the future. Given the pace of technological change, would you rather have more money in the future, or the latest iPhone that will no longer receive support from Apple five years after it’s released?

You don’t need to think it over. Start investing today and stop buying liabilities.