Sharing information about Texas, politics, and the movers and shakers you need to know. 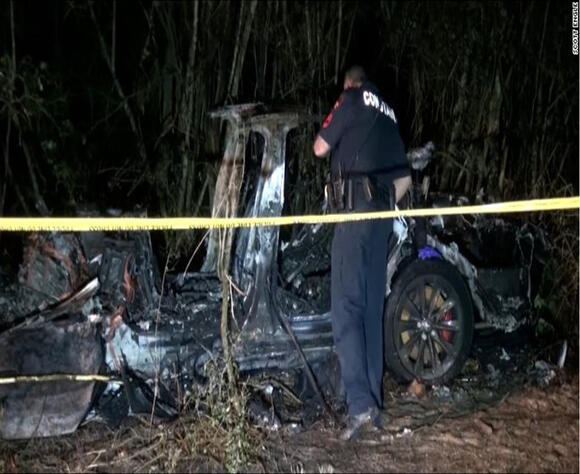 In a recent crash, two people were killed driving a Tesla car on the outskirts of Houston. The accident happened Saturday evening in a Houston suburb of Spring, Texas.

The Tesla veered off the road and hit a tree.

What was shocking about this accident was there was no one in the driver’s seat.

“There was no one in the driver’s seat,” Sgt. Cinthya Umanzor of the Harris County Constable Precinct 4.

Was the driver trying to have fun while driving the car?

In addition, reports show the 2019 Tesla Model S was driving fast when it failed to make a turn along a curve. The car crashed into a tree and burst into flames.

Elon Musk tweeted his comment on Twitter stating that Autopilot was not enabled and the car did not have FSD when initially purchased.

Musk added that for Autopilot to engage, the street would need lines to activate. The street where the car was driven did not have lanes.

It is odd to see two people doing stunts at this age. This would seem more likely for someone much younger. It will be interesting to see if the police or Tesla can figure out what really happened.

Tesla sells an automated driving system under the brand Autopilot and Full Self-Driving. The company offers a beta version of the FSD, FSD beta, for customers who pay $10,000 more.

Elon Musk said on the Joe Rogan show, “I think Autopilot’s getting good enough that you won’t need to drive most of the time unless you really want to.”

Houston Tesla crash from You Tube

What Tesla does to ensure the safety of its vehicles

Tesla’s Model 3, Model S, and Model X have achieved the lowest overall probability of injury of any vehicle ever tested by the U.S. government’s New Car Assessment Program. The cars have a low center of gravity.

In the event of a fire, the state-of-the-art design of our battery packs ensures that its safety system works as intended. This helps isolates a fire to select areas within the battery while simultaneously keeping heat away from the passenger cabin and the vehicle.

Since September 2014, active safety features are standard on all Tesla vehicles. This provides an added layer of safety beyond the physical structure of each car.

Tesla monitors and highlights the car’s safety record on its website. In the first quarter of 2021, Tesla recorded one accident for every 4.19 million miles in which a driver had Autopilot engaged.

For those who did not have Autopilot engaged, they had one accident for every 2.05 million miles.

For drivers who did not have Autopilot or Tesla active safety features, the company registered one accident for every 976 thousand miles.

In comparison, the National Highway Traffic Safety Administration NHTSA showed there was a car crash every 484,000 miles.

It will be interesting to see what the police or Tesla finds out about this accident occurred.

Sharing information about Texas, politics, and the movers and shakers you need to know.

Philadelphia Welcomes the Fifth Bus of Migrants From Texas

Texas Governor Greg Abbott buses another group of migrants to PhiladelphiaPhoto byTwitter. On Wednesday morning, November 30, a busload of migrants arrived from Texas at 30th Street Station. Philadelphia officials were there to greet them on a rainy morning.

Mark Morgan and Texas Governor AbbottPhoto byTwitter. A long-serving public official comes out and told NewsMax, that Texas Governor Greg Abbott needs to remove migrants and send them back to Mexico. Mark Morgan made these remarks on November 28, 2022, while speaking at the Wake Up America interview.

Mayor Jim Kenney and Texas migrantsPhoto byTwitter. Texas has been flooded with migrants crossing its border with Mexico as migrants were seeking asylum. Republican Governor Greg Abbott asked for support from Democratic President Joe Biden but his call was unanswered. So, Abbott took action.

Mayor Adams opens a new housing shelter for migrantsPhoto byTwitter. After about 3 months when New York started receiving migrants from Texas and spending a lot of money, the mayor spends more money on another housing project. This time Mayor Eric Adams plans to house migrants at Stewart Hotel according to Spectrum News. The hotel is located on Seventh Avenue and is an emergency shelter. There are 56 hotels that are emergency shelters in New York City.

The pandemic is not over completely as Texas is providing resources to people who need them. “The State of Texas continues working to ensure families and children impacted by school closures have access to nutritious meals. I thank HHSC (Health and Human Services) and TEA (Texas Education Agency) for working with the USDA (US Department of Agriculture) to provide these food benefits for Texas families across the state.”

Arizona Senators Fight Back Against the End of Title 42

Since President Joe Biden took office, it is estimated 1.5 million migrants were released back into the United States than released. Migrants that are released today won’t step foot into court until five years from now in 2028.

Governor Abbott is Relying on Bitcoin to Power Texas

Governor Abbott support Bitcoin in TexasPhoto byTwitter. Just about every Texan remembers the winter storm of 2021 where many homes lost power. Then the worst was when 246 Texans died since they were without heat for days.

Migrants Attacked Customs and Border Patrol, and It Wasn't the First Time

On November 2, 2022, a U.S. Border Patrol agent was attacked by migrants. Migrants were attempting to cross the Texas-Mexican border and the Border Patrol fired back with pepper balls at the crowd along the El Paso border. Migrants are waiting in Mexico until Title 42 is lifted on December 20 after a federal judge declared disallowed the COVID era ruling.

Governor Abbott Sends the Third Set of Migrants to Philadelphia

Governor Abbott buses the third set of migrants to PhiladelphiaPhoto byTwitter. On Friday morning, Texas Governor Greg Abbott sent the third set of buses to the City of Brotherly Love, Philadelphia. This is the fourth city that Abbott has sent buses of migrants who have crossed the Texas-Mexican border. It is estimated that over 2 million people have crossed the border this year.

Herschel Walker's home in TexasPhoto byTwitter. Republican Herschel Walker is in a run-off for Senate in Georgia with Democratic Senator Raphael Warnock. The election in Georgia is on December 6.

Mayor Adams welcomes migrants to New York CityPhoto byImages from Twitter. Daniel Barber represents the New York City Housing Authority and its 339,000 tenants. New York plans to spend hundreds of millions of dollars on migrants and he is disgusted by this.

President Biden Plans to House Migrants at a Texas Military Base

Fort Bliss housing AfghansPhoto byImages from Twitter. Last week a Federal Judge struck down Title 42 which was established under the Trump administration during COVID. The Center for Disease Control and Prevention’s (CDC) Title 42 allowed law enforcement to remove border crossers and illegal aliens who crossed the Texas-Mexican border.

Mayor Lightfoot welcomes migrants to ChicagoPhoto byImages from Twitter. On Wednesday morning, Texas Governor Greg Abbott bussed more migrants to Chicago. The city welcomed 32 migrants - the total number of migrants is now 3,716 who have arrived to the windy city since September.

Governor Abbott serving at Thanksgiving dinnerPhoto byImage from Twitter. Governor Greg Abbott made a trip to thank members for supporting the border. On Tuesday, the governor spent Thanksgiving in Edinburg with troops and the National Guard in the Department of Public Safety hanger. Edinburg is south of San Antonio along the Texas-Mexican border.

There are approximately 3,000 air marshalls but they may not be on as many flights as before. Most of them are helping to secure the southern border. And, you can thank President Joe Biden for that.

Governor-Elect Katie Hobbs on migrantsPhoto byImages are from Twitter and Meta. An Arizona rancher fears that migrants will overtake whatever inflation brings to his state. This was part of what John Ladd told Fox News in a recent interview.

Earlier this spring, The Washington Post said Texas could see up to 18,000 migrants crossing the border without Title 42. These figures could become true in December when Title 42 is lifted after a federal judge granted it five weeks before the policy is lifted.