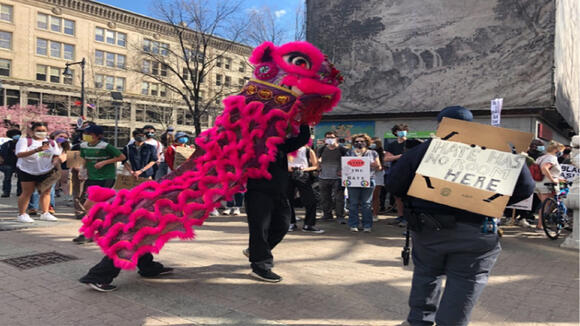 While former President Trump was in office, his comments about the coronavirus are having a domino effect on the Asian community in America. Some Asian American parents in Boston, Massachusetts are not sending their children back to school for fear of racist attacks.

When President Trump mentioned the coronavirus, he referred to the virus as the “Chinese virus” and “Kung flu.” Some people in America took that to heart and there has been a rise in the attacks against people of Asian descent. Recently, six women of Asian descent were killed in the Atlanta spa shooting spree.

Trump’s comments are creating a backlash as parents in Boston are demanding more Asian-American history in schools and denouncing Asian-American violence.

Boston has a population of about 692.600 according to a 2019 census estimate. Asian Americans make up about 9.7% of the population.

Christopher Fung teaches anthropology and Asian American studies at the University of Massachusetts Boston has a third grade daughter and he wants to keep her out of the classroom at the Russell Elementary School in Dorchester.

Fung said, “I do think there is more of a collective ethos — there is sort of a sense that we are collectively responsible for the health of the community. The safest thing to do is to . . . minimize the amount of time in public and in crowded spaces.”

Superintendent Brenda Cassellius emphasized that schools are a safe place for kids to return back to school. “I can’t speak to each and every family, but we are certainly dismayed by what’s happening publicly to our Asian community and we have condemned that,” Cassellius said.

Eleven-year-old William Qin said he’s seen the rise in racism first-hand, and that he was recently targeted by a stranger in his hometown of Belmont.

“I was just going back home and for some reason, he just drove up next to me and called me an idiot Asian kid,” William Qin said.

“The entire community is on edge. We changed our routines, we tell kids not to go out alone,” said Boston rally organizer Dr. Hua Wang.

Across the country, similar statistics show in public schools as Boston’s Asian American families decide to keep their children at home. Studies show in February, 69 percent of Asian fourth-graders and 78 percent of eighth-graders were taking classes at home full time online, compared to approximately 60 percent of Black and Latino students and about a quarter of white students.

In Minnesota, last month, Tsong Tong Vang was walking his 5-year-old grandson to the school bus in St. Paul, Minnesota. According to local news media, a woman pulled up in a car and started yelling anti-Asian abuse and threats at him.

Asian American sensitivity training also needs to be included among people who work in the educational facilities in Boston.

Chair of the Boston School Committee, Michael Loconto, has resigned after he apparently mocked the names of Asian American commenters on a hot mic. During the Zoom meeting, executive secretary Elizabeth Sullivan read the names out loud of some Asian Americans. Loconto made fun of their names not realizing his microphone was on. Here is a link to the video that was shared on Twitter.

Recently some demonstrators in Boston held a rally in Chinatown organized by the Asian Coalition of Massachusetts.

"We used to be called Orientals. We used to be dehumanized like that," Fiona Phie a member of the Asian Coalition in Massachusetts said. "Orientalism is an idea and a political framework embedded in white supremacy, imperialism, colonialism that has displaced our people in Asia and a big factor of why we have so many refugee communities here in America."

The group wants Boston to create more safety for members of the Asian American community.

Five Stocks that You Should Consider For December

Stocks you should consider for your stock portfolio. With the price of goods rising due to inflation, some prominent stockholders selling, choosing the right stock is more important than ever. These stocks are showing strong support heading into December.

Governor Abbott’s Executive Order on Masks is the Law

A three Federal Judge panel overturned the US 5th Circuit Court of Appeals allowing Governor Greg Abbott’s mask mandate in schools. “The risks of contracting COVID-19 for these plaintiffs are certainly real, but the alleged injury to plaintiffs from the enforcement of [the governor’s order] is, at this point, much more abstract.”

An Austin-based start-up caught the attention of entrepreneur, business owner, and Shark Tank star, Mark Cuban. Upon the partnership, ZenBusinesssaid Mark Cuban was:. “A passionate advocate and spokesperson to accelerate the company’s transformation into a trusted and beloved brand for entrepreneurs.”

Texas Governor Said There Will be Power this Winter

A Texas Mayor Gives his State of the City Address

The Dallas County Judge issued a local mask mandate and the appeal court voted on his side. Texas Governor Greg Abbott has not commented on this latest action. This is the latest fight over the COVID-19 mask between Dallas County Judge Clay Jenkins and Governor Abbott.

Governor Abbott Made Appointments to Several Board Positions this Week

In Austin, Texas, Governor Greg Abbott appointed and reappointed people in several government positions. This week, the Governor mocked his challenger Beto O’Rourke who is running for governor.

Tips to Get Started with Cryptocurrencies

7 tips from someone who has invested in the crypto market. With companies, banks, and well-known investors jumping into the crypto market in 2021, you may feel the need to join in as well. Or maybe you saw an advertisement promoting a crypto exchange or maybe news about Dogecoin or Shiba has crossed your path.

Over 1,000 Hot Spots Exist and Air Pollution in Some Texas Cities May Cause Cancer

A non-profit organization did the research and concluded that several cities have toxic air which causes cancer. According to KSAT, in the state of Texas, San Antonio is one of those hot spots. Dallas, Houston, El Paso, and a few other towns also made the list according to MySan Antonio.

A Texas School District Offers a Bonus to Employees

Dallas Independent School District is having a hard time keeping teachers, so they came up with a plan to offer teacher bonuses. According to the Dallas Morning News, the bonuses will be paid out in three installments over the next two years. They are September 2022, December 2022, and May 2023. Teachers can earn up to $3,500 in retention bonuses in the school year.

A Texas House Democrat changed parties and he received a strong congratulation from Governor Greg Abbott. On Monday, Texas House Representative Ryan Guillen was joined by Abbott as he announced he was seeking re-election as a Republican instead of a Democrat. Guillen was elected as a Democrat representing District 31.

Beto O’Rourke Could be Your Next Governor of Texas

After months of speculation, Beto O’Rourke finally made an announcement that he is running for Governor of Texas. He looks to unseat Greg Abbott in Austin. In an interview with the Texas Tribune, O'Rourke said:

Military Veterans Get No Love in Austin on Veterans Day

Military parade photo by Ian MacDonald on Unsplash. About 30,000 people were expected at Austin’s Veteran Day Parade but the event was canceled due to Austin’s rigid Coronavirus restrictions.

A Federal Judge Won this Battle With Governor Abbott

A federal judge ruled that Governor Greg Abbott’s executive order on public schools requiring masks cannot be enforced. According to the judge, the mask mandate violates a federal mandate and puts students with disabilities at a greater risk of getting COVID-19.

Get Ready Texas For Another Power Outage Unless Companies are Prepared

Texas girl freezingPhoto by Thirteen .J on Unsplash. Temperatures are already dropping so that means winter is right around the corner for Dallas residents. Winter officially begins on December 1. Texas does not require Gas companies to weatherize so you could face another power issue that you may have faced earlier this year.

On November 9, El Paso City Council voted to continue the entertainment center in downtown. In 2012, the Multi-Purpose Performing Arts and Entertainment Center was approved by voters at a cost of $180 million. Almost 10 years late, the cost is likely to be much higher.

The Best Companies that are Hiring Now in El Paso

El Paso jobs hiringImage by Gerd Altmann from Pixabay. These are the businesses in El Paso that are hiring in the borderland. Several companies are hiring and the jobs that are available go by very fast. So if you are looking for a job, don’t wait and apply.