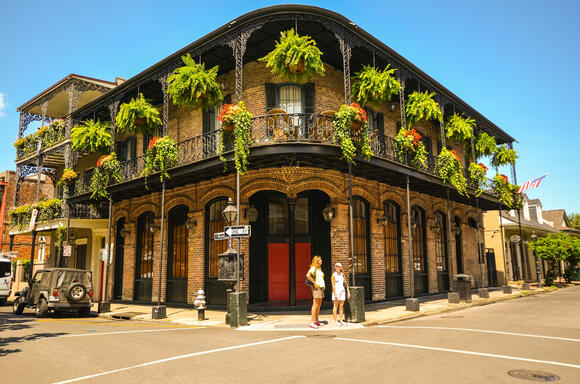 In 2020, New Orleans was ranked as the ninth highest city with the most car burglaries. In 2018, New Orleans had about 2,950 car thefts which was about 75 thefts for every 10,000 vehicles. In New Orleans, the number of car thefts was as high as the overall crime in the city.

In 2018, over 18.51 million people visited New Orleans. This city known for tourism has a high rate of crime that car thieves enjoy.

To prevent your car from getting broken into in New Orleans, follow these steps as best as you can. Keeping sight of your car will save you a lot of headaches later on.

Even though Mardi gras is over, two other events could attract car thieves. The first holiday is Easter celebrated on Sunday, April 4, 2021. Following this, the next major holiday is Memorial Day which is celebrated on May 31, 2021.

Whether you live in New Orleans or plan to visit, these are some precautions you should consider.

1. Lock your car doors and roll up the windows. Never leave your keys in the car unless you have at least one foot in the car. If parked in a driveway, make sure you lock your doors. Thieves walk around different homes and try to see who has left their car door unlocked.

2. Park in well-lit areas or ones with a nearby security camera. When parked in a dark area, this gives a thief an advantage to break into your car. Try to pay in a well-lit area.

6. Make your stereo less eye-catching. Stereos are one of the top items thieves steal. If you can hide the faceplate of the stereo, then you should do that. It may be possible to remove the stereo if you can when you leave your car.

7. Don’t leave your car running. If you want to get out for a few minutes if you are running into a store, this gives a thief plenty of time to steal your car. Don’t take the chance and give the thief an easy opportunity.

9. When you stop for fuel, take the keys out of your car and lock it when you go and pay.

10. Use a wheel lock – it’s a big, chunky visual deterrent. Wheel locks go on the car steering wheel which will prevent thieves from trying to steal your car.

11. Cars with small triangular windows at the back (rear quarterlight) are easier to break into. Thieves can easily break the small window and almost silently with the right tool.

12. Learn your car’s storage areas. Some cars have hidden storage areas where you can hide your valuables or items you want to keep hidden.

Keeping your car safe while in New Orleans will save you a lot of headaches and trouble later on. Do your best to deter thieves from stealing or breaking into your vehicle.

Denver is Preparing For an Influx of Migrants From Texas

Venezuelan migrants are crossing the United States and Mexican border in higher numbers since they started arriving over the past 14 years. President Joe Biden granted Venezuelan migrants temporary protected status for 18 months.

The number of migrants that have crossed the border in 2022 is over 2 million people. This is up 25 percent from a year ago. States bussed or flew many of the migrants to sanctuary cities in the United States.

Mayor Adams Wants to Use Cruise Ships to House Migrants

Mayor Eric Adams wants to use cruise ships to house migrantsScreenshot from Twitter. New York Mayor Eric Adams is currently in talks with Norwegian Cruise Ship on housing the migrants for six months until the tent shelters are complete. Adams believes the migrants could surge up to 75,000 people which would severely overwhelm the city's resources. An estimate of 14,600 migrants have arrived in the city and some were bussed from Texas by Governor Greg Abbott who started sending them to New York City in August.

City Councilman is Forced to Resign Over a $75 Million Disagreement

Texas Residents are Receiving an Extra $250 a Month - Are You One of Them?

Dallas City Council agreed to a plan to provide money to disadvantaged families. The initial idea is to give $250 a month to 325 families for one year. This equity plan was passed by Dallas City Council in August. This is the first time the city has given money to residents.

Ad attacking Governor AbbottScreenshot from Mi Familia video. A new ad came out and attacks Texas Governor Greg Abbott. Abbott is running for re-election against Democratic challenger Beto O’Rourke for the seat in Austin on November 8.

By now, you have heard about the migrants entering in large numbers into El Paso. What you haven’t heard from public officials is not always 100% correct. Sometimes you need to read between the lines or do some research on your own.

What You Need to Know About The Biggest Debate in Texas - Beto O'Rourke vs. Governor Greg Abbott

Governor Abbott and Beto O'Rourke debateScreenshot from Twitter. On Friday night, Texas residents will have time to see Texas Governor Greg Abbott and Democratic candidate Beto O’Rourke as the two debate live. This is the only debate scheduled between the two who have campaigned for months for Texas Governor. The election is set for November 8 and the debate should help some undecided voters determine who they want to see as the next Texas governor.

Migrants Surge to 1,452 as Chicago Welcomes Them

Chicago has now welcomed 1,452 migrants since they began arriving at the beginning of September. Texas Governor Greg Abbott began bussing migrants out of his state which sees about 1,000 or more migrants each day as they cross the border from Mexico to Texas.

Governor Abbott is sending Task Force 1 to Florida as they prepare for Hurricane IanScreenshot from Twitter. Texas Governor Greg Abbott announced on Tuesday afternoon, he was deploying Texas A and M Task Force 1 to assist residents in Florida as they prepare for Hurricane Ian. The deployment is part of the Federal Emergency Management Agency (FEMA).

Mayor Eric Adams and migrantsScreenshot from Twitter. Five buses arrived in New York City on Tuesday as the city is building up tent city in the Bronx. Tent city is not a permanent home for migrants but a temporary home to facilitate their transfer which is expected to last up to four days.

Chicago is a Welcoming City as They Support Over 1,000 Migrants From Texas

Governor Abbott, Mayor Lightfoot migrantsScreenshot from Twitter. Chicago announced there were 1,177 migrants that were bussed from Texas. The initial arrival of migrants started on September 1 with the initial busses.

New York Mayor Believes There Could be 75,000 Migrants as Tent City is Created

Mayor Eric Adams is creating a tent city for migrantsScreenshot from Twitter. Mayor Eric Adams wanted to house the migrants in tents in a Bronx parking lot which is drawing some criticism from local leaders. Borough President Vanessa Gibson is one of them.

Mayor Muriel Bowser and migrantsScreenshot from Twitter. The Washington D.C. Council voted unanimously to approve legislation that would help migrants and the community. Last week, the council approved the Migrant Services and Supports Emergency Act of 2022.

On Saturday, Beto O’Rourke made a stop in Austin. O’Rourke spoke at the Texas Tribune Festival and paid no attention to the recent poll that showed he was nine points behind Governor Greg Abbott.

Governor Greg Abbott and Beto O'RourkeScreenshot from Twitter. You may be aware that Democratic challenger and Republican Governor Greg Abbott will debate for the one and only time this Friday, September 30 in the Rio Grande Valley. The event will be broadcasted and streamed online.

Mayor Adams and Governor AbbottScreenshot from Twitter. To handle the surge of migrants, New York Eric Adams wants to open more shelters since the number of migrants has overwhelmed the city's homeless structures.