3 Things Philadelphia's Joel Embiid Can Teach You About Sacrifice

Embiid’s habits are making him a candidate for Most Valuable Player.

In life, NBA player Joel Embiid’s on and off the court habits show that sacrifice is necessary to get better in your profession. Philadelphia 76er Joel Embiid was selected to the All-Star game for March 7 at State Farm Arena in Atlanta, Georgia.

“We’d basically go until he passed out,” Hanlen said.

With Embiid’s off-season training, this has paid off for him. He spent more time working out with a goal to take the 76ers to the NBA finals. Embiid wanted to start the season healthy and in shape.

Since entering the league, Joel Embiid is known for his trash talk on and off the court. This season he is not talking as much and letting his play speak for itself.

“I want to dominate on the offensive end, but mainly the defensive end. That’s the goal I set for myself at the beginning of the year,” said Embiid.

Embiid is playing his best season in the NBA. While averaging 30 points, 41% three-pointers, 85% free throw percentage, and 11.6 rebounds a game. With Seth Curry taking 3 pointers, this frees up space for Embiid on the court. 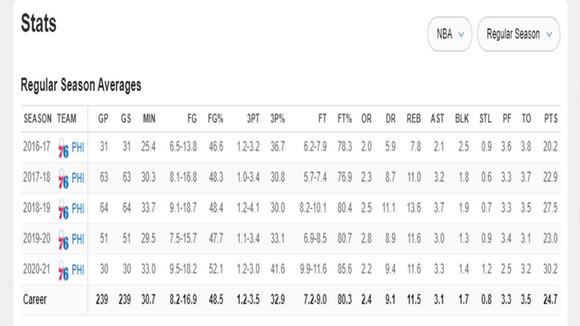 Embiid used to have the worst diet during the season

While at the University of Kansas, his coach, Bill Self, said Embiid would come to his house and head straight to the desserts. Self said Embiid was the “least mature eater he ever encountered.” Embiid would only eat desserts and his take-home plate were desserts.

In a 2015 Sports Illustrated story, Embiid’s Philadelphia hotel refrigerator was stocked with healthy food. Each week the staff would come in to replace the food and none of the healthy food was touched. They started to worry about what Embiid was eating. The team checked Embiid’s hotel charges and they saw he was ordering junk food along with his signature drink, a Shirley Temple. During and after games, Embiid was eating chicken fingers and hot dogs.

During this past off-season, Embiid hired a personal chef to help him eat better. Growing up in Cameron, Embiid said he never ate vegetables. The change in his eating habits has allowed Embiid to play longer on the basketball court with few injuries than in the past.

The Philadelphia 76ers are in 1st place with a half-game lead over the Brooklyn Nets. They have the best winning percentage of any team in the Eastern Conference.

With a new coach, Doc Rivers is getting the best out of Embiid and the team. With the remainder of the season to go, this will be interesting to see how far Embiid can lead the 76ers in the playoffs.

My Cryptocurrency Investing Tip to Help You Make Smarter Decisions

Cryptocurrency photo by RODNAE Productions on Pexels. The cryptocurrency market hasn’t been nice to you lately. Then this may have you wondering if this was the right market to invest in.

3 Reasons You May Want to Sell Your Altcoins (Opinion)

Trading cryptocurrenciesPhoto by Behnam Norouzi on Unsplash. The cryptocurrency market has not been favorable to investors lately. Since October last year, cryptocurrency prices fell and continue to trade in an up and down movement.

Inflation, the Russian war, and the high cost of gas have you wondering where can you save your money for the best return. You know banks won’t do it for you. They haven’t for years.

This is one of the more bullish price predictions on Bitcoin. In her most recent public appearance, Cathie Wood shared her thoughts on Bitcoin. At the Miami Bitcoin Conference, Cathie Wood stated the cryptocurrency would reach over $1 million per Bitcoin by 2030. At the time of this writing, the crypto is in the $42,000 price range.

After Texas Governor Abbott signed the abortion bill last September in Austin, companies such as Yelp are offering pregnant women an alternative. The company will pay travel expenses for any employee and spouse to have an abortion in a state that allows abortions.

Texas Governor and a State Mayor are in Favor of Cryptocurrencies

How you can donate cryptocurrencies to Ukraine

Cryptocurrencies have been pouring into Ukraine since the war started. As of two days ago, Ukraine has received $54 million in cryptocurrency donations. Ukrainian officials are asking for crypto donations.

Cryptocurrencies are becoming one of the go-to investments of today

After COVID, inflation, and now Russia, these factors didn't waste any time beating down your door. Each of these brought different results and they are hard to escape. However, some people have quietly increased their wealth to become rich.

My tips on how you can pay cryptocurrency taxes

For years, I tried to understand the tax system. If you think about it, you will most likely pay taxes for the rest of your life. So, it’s good to have a general understanding of it, especially when it comes to cryptocurrencies.

A few years ago, some thought avocado toasts were a joke and the laughing could have gotten worse. Dallas restaurants were close to running out of avocados but a deal was made on Friday.

Drive Five Hours to Santa Fe To Relax, Enjoy the Casinos, and See Some History

Every once in a while, you may feel the need to leave the hustle and bustle of El Paso. Getting away for a few days may be exactly what you need. You don’t have to drive as far away as Scottsdale, Arizona, or San Diego, California to relax when you can drive to Santa Fe, New Mexico.

With the market going down recently, many people lost money. Some lost $100,000 or more. I recently heard that The Moon lost over $100,000,000 of his net worth. But there is one secret that many people fail to do and they actually do lose money in their cryptocurrency investment.

Ethereum has drawn a lot of criticism lately over its high gas fees. But this cryptocurrency has a lot of potential today to be a winner over Bitcoin. Personally, I own more Ethereum than Bitcoin as I was adding more to my portfolio over the past year.

The Best Companies that are Hiring Now in El Paso

These are the businesses in El Paso that are hiring in the borderland. Several companies are hiring and the jobs that are available go by very fast. So if you are looking for a job, don’t wait and apply.

A Texas Senator Bought Bitcoin During the Cryptocurrency Dip

Every few months, you hear about a politician who enters the cryptocurrency market. First, it was Wisconsin Senator Cynthia Loomis who has been a strong supporter of Bitcoin. She intends to spread awareness about cryptocurrencies.

My opinion on how you should handle the Cryptocurrency price when it drops.

With the current crypto market, there are some things you should do. To handle the erratic prices, it’s best to go in with a game plan rather than reacting to changes in the market.

The bull run last year didn’t happen even though many well-known investors gave their cryptocurrency predictions. Even though a lot of institutions invested, Bitcoin ended the year lower than anyone expected. So just about all of the crypto predictions were wrong.

What it takes for you to be a Bitcoin Whale