The beast was likely over 60-years-old

A hunter from Texas - Mike Smith, aged 57 - was taking a hunting trip in Florida recently, when he managed to bag a legendary local gator. Smith was hunting between Ft. Myers and Lake Okeechobee on March 7.

He encountered the giant gator, with the assistance of a local guide - Daniel Townsend of Townsend & Sons Everglades Outfitters and managed to tag the gator with a single shot.

Townsend shared pictures of the enormous gator on the company's Facebook page:

The gator had killed and eaten cattle

Relaying details of the hunt, Daniel Townsend explained why the beast was so hard to catch.

“We’d been trying to get that gator for some years. He was a problem [because] he was smart. He’d killed and eaten some of the cattle on the ranch, and he had to go. But it wasn’t easy. I guided a hunter just a week before we got the gator, and the hunter missed him clean—which made the gator even tougher to kill.” 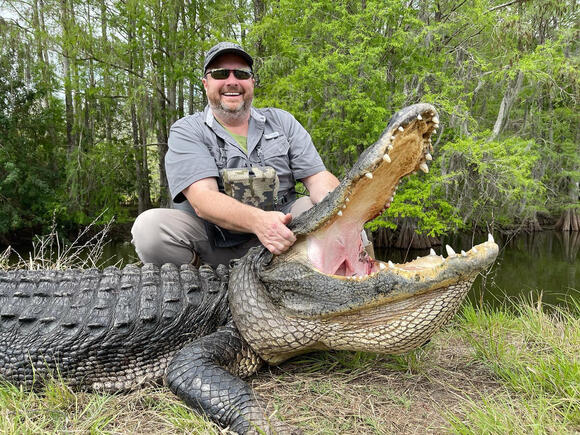 Mike Smith with the 12-foot gatorFacebook

Still short of the record

While this particular gator was undoubtedly enormous, he was still some way off the record for a Florida gator - the longest gator captured in Florida was 14 feet, 3.5 inches and was caught in Lake Washington, Brevard County earlier this year. That one was estimated to be around 80-years old.

In that case, the hunter subsequently came under fire on social media for having killed rather than captured such a specimen so that it could be released into a sanctuary. A similar backlash may yet be experienced in the case of the gator shot Fort Myers.

While both these immense beasts were known to have killed and eaten animals from local farms, Floridians are used to living around gators and the number of attacks on humans is still relatively low.

A 2005 study reported just 376 alligator attacks since 1948. In Florida, gator attacks were on the increase from around 6 per year in 1971 to around 10 per year between 1987 and 2017. The numbers involved are still relatively small given the ferocious nature of alligators and how dangerous they appear.

Have you had any close encounters with gators in Florida? Are you in favor of hunting or do you think the reptiles should be left in peace? Let me know in the comments section below.

Matt GaetzGage Skidmore, United States of America, CC BY-SA 2.0 via Wikimedia Commons. It has emerged that Florida's Republican Representative Matt Gaetz is sponsoring a bill that seeks to prevent government agents from the Internal Revenue Service (IRS) from being able to get ammunition for their guns. The bill in question is HR 268 - the 'Disarm the IRS Act'. Some might describe it as frivolous but it is apparently intended as a means of preventing government overreach into the lives of private citizens.

"Prepared to win the battle to protect our children and teachers" On August 9, Sheriff Wayne Ivey of Brevard County Sheriff's Office posted a video message to Facebook in which he shared plans to keep kids and teachers safe in school when the next academic year begins. Most notable in the plans were that deputies posted in schools won't just be there as an armed deterrent but rather, they'll be equipped with large rifles and wearing tactical gear.

A proposal was filed with the Department of Elections in Florida on August 8, calling for the legalizing of marijuana for recreational purposes. If approved the proposal would allow people over the age of 21 to legally possess, purchase and use marijuana products for non-medical purposes.

On August 8, former president Donald Trump took to his social media platform - Truth Social - to announce that the FBI were raiding his Mar-A-Lago home in Florida. It's alleged that the federal agents were there in connection with the removal of confidential documents from the White House at the end of Trump's one-term presidency.

Protecting Florida's ecosystem - one snake at a time. Casey DeSantis at the launch of the Python ChallengeTwitter of CaseyDeSantis. On August 5, Florida's First Lady Casey DeSantis attended the launch of Florida's Annual Python Challenge. The event runs through to 5pm on August 15 and offers registered hunters the chance to win cash prizes of up to $2,500 for Burmese Pythons that are caught and removed from the Everglades and surrounding areas.

A poll carried out at the Conservative Political Action Committee (CPAC) conference held from August 4-7 in Texas has shown that 43% of those who voted would favor Ron DeSantis as presidential running mate with Donald Trump. DeSantis was overwhelmingly the favored choice with respondents to the poll.

Poll of Florida Voters Suggests DeSantis May Receive Less Than 50% of Votes in Gubernatorial Election – A Tight Margin?

Governor Ron DeSantisGage Skidmore, United States of America, CC BY-SA 2.0 via Wikimedia Commons. A recent poll of over 2,000 progressive voters in Florida - weighted to represent Republican voters - has suggested that the results of November's gubernatorial election could be closer than expected.

Another attack on states outside California from Newsom. Gov. Gavin Newsom of CaliforniaOffice of the Governor of California, Public domain, via Wikimedia Commons. On July 4, California's Governor Gavin Newsom spent $105,000 on TV adverts to run in Florida. He used those adverts to make the claim that "freedom is under attack" in Florida and invited residents of the state to move to California "where we still believe in freedom".

Gov. DeSantis on August 4Twitter of GovRonDeSantis. On August 4, Governor Ron DeSantis of Florida launched a PR offensive on Twitter while using his executive powers as governor to suspend State Attorney Andrew Warren - a Democrat - from office for allegedly neglecting to enforce certain laws. In the interim period the governor has appointed Susan Lopez - a fellow-Republican - to act in Warren's place.

Almost 2,000 Fentanyl overdoses in Florida in 2022. On August 3, Florida's Governor Ron DeSantis announced an expansion of substance abuse and recovery initiatives in the state, intended to address the opioid addiction crisis being witnessed in the state.

Tackling "Joe Biden's recession" On August 3, Georgia's Governor Brian Kemp announced that he has signed two executive orders that once again extend the suspension of tax on gasoline and continue efforts to address supply chain issues being experienced in the state.

Organizers of Atlanta's Music Midtown Festival cancelled the event on August 1, primarily due to safety concerns arising from whether they could implement a local ban on guns from the festival site.

Opinion: Seven of Florida’s Republican Representatives Voted Against Banning Lions and Tigers as Pets: Is It a Priority?

It seems that politicians in America may have lost sight of what's most important - on July 28 members of the House voted on a bill HR263 - The Big Cat Public Safety Act, intended to introduce a ban on the private ownership of lions and tigers in the United States.

Organizers of Atlanta's Music Midtown Festival took to Twitter on August 1 with an announcement that the event would be cancelled for 2022. In a year when many live music events were finally held once again after the global pandemic forced many events to be cancelled in 2020 and 2021, the news comes as a disappointment to Georgian music fans who had tickets.

There are many contentious sides to the debate between pro-life and pro-choice groups, and there's a real sense that we've only just begun to see all the knock-on effects from the U.S. Supreme Court overturning Roe V. Wade in June this year.

It emerged on August 2 that the firm behind a leading online marketplace specializing in wholesale cannabis and hemp products - kush.com - will be relocating from Seattle, WA to Tampa, FL. Kush is one of a number of corporations within diverse industries that have recently seen the opportunities presented by being based in Florida.

On August 1, Vice President Kamala Harris was in Miami, FL to take a tour of the National Hurricane Center. She later spoke at Florida International University and announced $1 billion of Federal funding that will help those regions of the U.S. that have been struck by recent extreme climate events such as flooding in Kentucky, and wildfires in California.

But nobody in Florida won the $1.28 billion jackpot. On Friday July 29 the latest draw took place for the Mega Millions National Lottery - and the record biggest ever top prize of £1.28 billion was up for grabs.