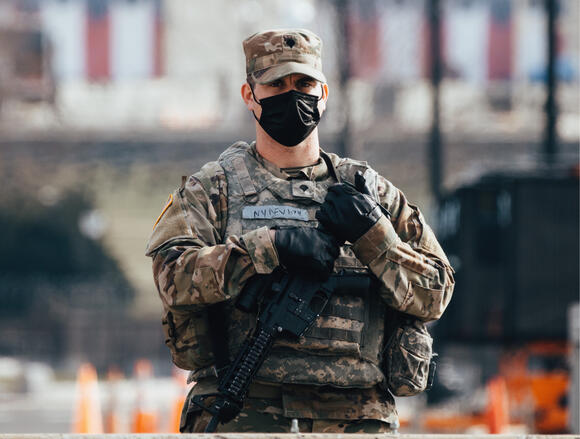 GuardsmanPhoto by Brendan Beale on Unsplash

On December 2 Governor DeSantis announced his intention to reinstate the Florida State Guard - a private civilian-military force of 200 volunteers that would sit under his control. It's a move that has prompted speculation and skepticism over his motives and intentions for the force.

If the force were to be brought to life, Florida would join 22 other states with an active state guard. The last time Florida had such a force was when it was established in 1941 as members of the Florida National Guard were diverted to fight in World War 2.

At the conclusion of the war, in 1947 the state guard was dismantled.

State guards are not a part of the US armed forces and funding for them cannot be taken from federal money - they are entirely funded by the state, and in essence, its taxpayers. Their members cannot legally be involved in any federal military reserve forces.

To all intents and purposes then, they are literally a privately funded military force with no federal ties.

The intention behind state guards is to provide support - whether as a military force or as first responders in times of disaster or emergency when the National Guard is unavailable or unable to help.

For decades now though, Florida has relied on the coastguard and federal law enforcement agencies to protect its coastline and to mitigate against other threats. Is there really just-cause for the establishment of a private militia, 200-strong?

Governor DeSantis' announcement has drawn predictably partisan responses as to what his motives could be. Some commentators point out that existing federal agencies and forces have chains of command and merit-based leadership that is free from political bias or motive.

If DeSantis were the leader of the state guard, is there any reason why it wouldn't become his personal army, directed to enforce his political will?

Democrats in the state, including Rep. Charlie Crist have been quick to speculate also, that the force could be viewed as little-more than DeSantis' private, hand-selected secret police - but funded by the state's tax payers.

Whether the force is established or not will presumably depend on whether the idea gains political traction. It could be interesting to see if the force is universally backed, or whether the Governor faces resistance from tax-payers in the sunshine state who are reluctant to fund his private force.

What do you think about the reinstatement of Florida's state guard? Are you in favor of it? Do you trust the Governor's motives? Let me know in the comments section below.

Ron DeSantis Describes Rumors of ‘Beef’ Between Him and Donald Trump as a “Fabricated Media Narrative” – Is It Though?

Florida's Governor Ron DeSantis yesterday finally addressed recent reports that former president Donald Trump described him as "dull" and "gutless". DeSantis has appeared to dismiss the criticisms, describing them as being part of a "fabricated media narrative".

Floridians are accustomed to living around deadly creatures - encounters with alligators are commonplace for example. But a woman from DeBary likely didn't expect to encounter a black bear as she walked her dog on the driveway to her home on the evening of January 13.

Video surveillance to be implemented in Florida's schools?. Surveillance graffitiPhoto by Etienne Girardet on Unsplash. Republican Representative Bob Rommel of Naples, Florida has filed a proposal that would allow the installation of video cameras and microphones in school classrooms around the state, under House Bill HB1055, it emerged this week. The bill received it's first reading in the state's legislative season, on January 11th.

Tree fallen on a carPhoto by Mick Haupt on Unsplash. On the morning of January 16, a number of individual tornadoes touched down in the Fort Myers area of South West Florida, causing significant damage, destroying 27 homes and leaving at least another 33 unlivable. It also forced 70 residents out of a mobile home complex in Charlotte County.

A Florida Couple Kidnapped a Man and Forced Him To Drink Bleach and Confess to Cheating – Thankfully He Escaped!

A couple from Miami were arrested on January 7 by police, for kidnapping and torturing a third man, holding him against his will for three days before he escaped. Marie Dorsainvil, 51 and her 56-year-old husband Occius Dorsainvil are charged with kidnapping, extortion, and attempted murder after they held a man - claimed to be a friend in captivity.

Two Big Florida Lottery Prizes Have Been Claimed This Week – And Both Winning Tickets Were Bought at Publix Stores!

Two residents of Florida have this week received significant lottery prizes after starting 2022 with big wins. Aside from each being blessed with good luck and now having plenty of cash to spare, the winners have something else in common - they both purchased their winning tickets at Publix supermarkets in the state.

An 8-Foot Alligator Was Pulled From a Florida Swimming Pool - The Pool Service Company Exceeded Expectations!

No job too big or small (or scaly) A Florida pool service firm got more than they bargained for when they were called to attend to an issue with a customer's swimming pool. Representatives from Hodge Pool Service arrived for the job in Venice, Florida, only to be confronted by the sight of an alligator, 8-feet long and happily swimming about.

Governor DeSantis Didn’t Mention Constitutional Carry During His ‘State of the State’ Speech – What Could This Mean?

Vague mentions of the second amendment but no promises. On January 11 Florida's Governor Ron DeSantis made his 'State of the State' address, kicking off the 2022 legislative season. In the speech he set out his priorities and intentions for the year. Many Floridians will have been watching with interest to see if they agree with his points of focus.

On January 11 it emerged that a Florida woman's dying wish was to leave $32k to her local Sheriff's office - the money was left to them so that their police dogs could be equipped with full body armor.

Florida’s 2022 Legislative Season Kicks Off This Week – Is It Dominated by Governor DeSantis’ Personal Agenda?

No critical race theory, relaxed gun-control and bonuses for teachers. Governor DeSantisState of Florida, Public domain, via Wikimedia Commons. January 11 sees the beginning of the state's 2022 legislative season, and topics on the agenda look to be dominated by a variety of topics - many of which seem to have been chosen to broaden Governor DeSantis' appeal to the conservative voter base.

An 8-Year-Old Boy Fell From a 7th Floor Apartment Window in Miami – And Survived!

Miami Apartment BuildingPhoto by Pontus Wellgraf on Unsplash. An 8-year-old boy is recovering in hospital after falling from a 7th-floor window in Miami on Saturday January 8 - a drop which he miraculously seems to have survived.

Police have arrested a Florida man - Garrett James Smith of Oldsmar - on January 7 at a rally outside the Pinellas County Jail. The rally was being held by supporters of J6 protester Jeremy Brown, a suspected member of the right-wing group Oath Keepers, who is in jail for his part in the riots at the Capitol building in 2021.There have been early reports that Smith may be a member of an Antifa group, looking to disrupt the rally but that has yet to be substantiated.

Governor DeSantisGage Skidmore from Peoria, AZ, United States of America, CC BY-SA 2.0, via Wikimedia Commons. In a speech addressing manufacturing in the state of Florida on January 5, Governor Ron DeSantis singled out the Chinese Communist Party for its role in the microchip and semiconductor shortages currently faced in the US and around the world.

A January report suggests that Florida could be in for another crazy year for its environment and climate in 2022, carrying on where 2021 left off. The effects of climate change compounded with population growth in the sunshine state as Americans migrate to Florida following the pandemic, could combine to mean a greater number of extreme events if predictions originating from the Earth Observatory come true.

Governor Ron DeSantisGage Skidmore from Surprise, AZ, United States of America, CC BY-SA 2.0 via Wikimedia Commons. Governor Ron DeSantis has said what many university students and their parents were already thinking - that universities that force their students to study via online classes should receive a refund of their tuition. He discussed the subject during a speech at Broward Health in Fort Lauderdale on January 3.

Do childish tactics weaken politicians' credibility?. Governor Ron DeSantisGage Skidmore from Surprise, AZ, United States of America, CC BY-SA 2.0 via Wikimedia Commons. Late on January 4, Florida's Agriculture Commissioner and Democrat candidate for the position of Governor - Nikki Fried - took to Twitter to issue what some would describe as a childish and inflammatory critique of Governor Ron DeSantis.

He used it to buy a Lamborghini and designer clothes. A Florida man from Fort Lauderdale has been arrested and is under investigation for orchestrating a fraud scheme that attempted to obtain $4.2 million of pandemic relief funds under the CARES act.

A recent poll to assess the mood of Americans has concluded that Florida's Governor Ron DeSantis is still a long way behind former President Donald Trump in the running for the Republican party nomination for presidential candidate.

He can't seem to avoid trouble in spite of good deeds. Rapper Kodak Black has started the new year by getting into trouble with the police (again). On New Year's Eve, he was arrested by Broward County Sheriffs and taken into custody in Pompano Beach, where he lives.

The Powerball Jackpot on January 3 will be $522 Million - 6 Years Ago a Florida Couple Won a Similar Amount - An Omen?

The New Year's Eve national Powerball lottery draw promised a jackpot prize of $500 million - winning the jackpot would have been quite the way to start the new year, but unfortunately nobody across the USA was that lucky. One Florida ticket holder scooped $1 million for matching 5 out of 5 numbers, but didn't match the powerball too.