According to Gov. DeSantis, President Biden Is To Blame for Florida Murder Committed by Immigrant

He believes President's migrant relocation program is at fault 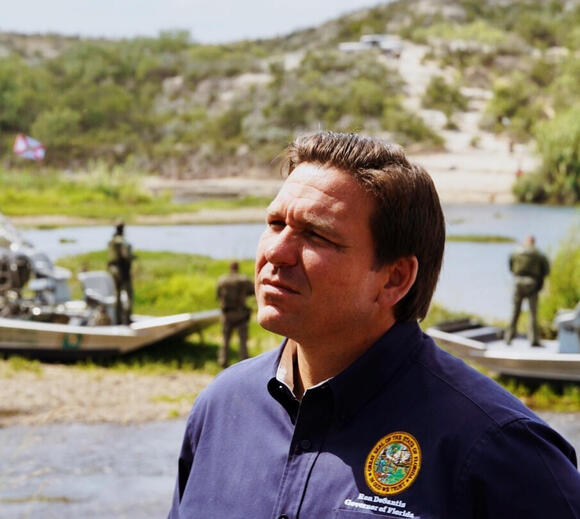 On November 10, Governor DeSantis took to Fox News to share his opinion that the recent murder of a Jacksonville man at the hands of Honduran immigrant, Yery Noel Medina Ulloa was President Biden's fault.

DeSantis alleged that the accused murderer was one of many who've been relocated across the country, away from the US-Mexico border on clandestine flights set up by the Biden administration to ease pressure on the border states.

During the interview, Ron DeSantis told Sean Hannity that in his opinion, Biden was responsible for Cuellar's death for having let him remain in the country and for bringing him to Florida.

Earlier this week, Florida's governor had threatened that Florida would refuse to accept the relocation of illegal immigrants into the state.

The murderer killed his sponsor

It appears that Ulloa, aged 24 had initially managed to remain in the US by claiming that he was only 17 years of age. He was relocated to Florida in October, claiming that his uncle lived there. The 'uncle' in question, Javier Cuellar, became his sponsor and was also later killed by Ulloa. Whether Cuellar and Ulloa were actually related are yet to be clarified.

Governor DeSantis has been taking an active interest in the US-Mexico border crisis, ever since he responded to the joint plea for support from Republican governors of Texas and Arizona. He provided law enforcement officers on loan to assist on the ground, and has repeatedly called for action from the Biden administration to resolve the issue.

His latest suggestion is that if the flow of immigrants isn't going to be stopped, then they should instead be sent to Delaware - the President's home state.

“If they’re going to come here, we’ll provide buses and send them to Delaware. If he’s not going to secure the border, then he should have everyone there!” - Governor Ron DeSantis

Was it Biden's fault?

Governor DeSantis feels that the buck stops with the president for this murder, and had this to say:

"One of the illegals that Biden flew in committed a murder in Florida recently. That individual who died would be alive had Biden not been doing this. So this is really serious stuff." - Gov. DeSantis

While murders unfortunately happen every day, it seems that the victim in this case would still be alive if Ulloa hadn't been allowed to remain in the USA and relocated to Florida. The case also adds weight to the unfortunate and incorrect narrative that all immigrants are out to cause harm - but that likely matters little at this point to the family of Javier Cuellar who are mourning his loss.

What do you think about the relocation of immigrants to Florida from the border states? Do you think Governor DeSantis is acting responsibly but wanting to push back on having immigrants in Florida, or should a more humane approach be adopted? Let me know in the comments section below.

Gov. DeSantis Signed a Bill To Promote the Donation of Breastmilk to Banks – Could It Resolve Baby Formula Shortages?

Breastfeeding babyPhoto by Hanna Balan on Unsplash. In early April, Florida's Governor Ron DeSantis signed SB1770 in state law. The bill allows for state funds to be used to pay for bank services to store and dispense human milk from donors.

Baby feeding on a bottlePhoto by Lucy Wolski on Unsplash. A report from May 19 shows that supplies of baby formula in the state of Florida have become even more severe in the month of May.

Flight Crew Delivers a Baby Mid-Air on a Plane Bound for Florida – The Baby Has Been Named ‘Sky’!

On May 17 Florida's Governor Ron DeSantis was joined at a press conference by his wife Casey, to announce that $100 million of state funding is to be directed towards cancer research and treatment in the 2022-23 financial year. This is $37 million more than was previously allocated in the state budget, and represents the significance of this cause to the Governor, his wife and to Floridians more generally.

Governor Ron DeSantisGage Skidmore, United States of America, CC BY-SA 2.0 via Wikimedia Commons. A press release filed by the Federal Justice Department on May 17 has confirmed that a major donor to the GOP - Steve Wynn, famed owner of Wynn Resorts and Casinos - is under pressure to register as an agent for the People's Republic of China. Wynn has donated millions of dollars to state and federal Republicans across the U.S. including a donation of $100,000 to Governor DeSantis' political action committee.

On May 16 Florida's Governor Ron DeSantis signed a bill into state law, which prohibits protesting outside of homes. With the signing of HB1571 - the residential picketing bill - it is now illegal for people to protest outside the homes of others without their permission. It's intended to prevent situations such as those that have arisen recently where protestors gathered outside the homes of U.S. supreme court justices in anticipation of Roe Vs. Wade being overturned.

Gov. DeSantis: State Government Would Take Over Reedy Creek District From Disney, Not Pass On Debt To Local Districts

The identity of Florida's latest lottery millionaire has been confirmed after a man from Miami - Daniel Alvarez, aged 49 - claimed the $1.95 million prize in the Florida state lottery 'Triple Play' draw.

Gov. DeSantis announces funding for nursing educationGovRonDeSantis on Twitter. On May 16 Florida's Governor Ron DeSantis announced funding of $125 million that will be earmarked for the education and training of nurses in the state. Speaking at a press conference together with Florida's Senate President Wilton Simpson and Surgeon General Joseph Ladapo, the governor affirmed his commitment to ensuring there are enough qualified nurses to meet the healthcare needs of Floridians long into the future.

Thinking of Selling Your Home and Leaving Florida? A Survey Says Sellers Will Get the Best Price by Selling on May 23

Getting the best price for your home is a matter of timing. Woman moving homePhoto by Zachary Kadolph on Unsplash. It now seems that the cost of living in Florida is out of control, in part due to the escalating cost of housing. Democratic challenger for the gubernatorial election was recently quoted as saying that "Floridians can't afford Florida anymore" and a big part of that is the rapidly rising rents and property prices in the state.

In response to the recent hot weather in Texas, the Energy Reliability Council of Texas (ERCOT) issued an appeal to customers on May 13, to turn up their thermostats in order to protect the supply of electricity across the state.

A Florida couple were woken up suddenly, late on May 10 as the alarm on their covered porch was triggered. Unsure of what might have set off the alarm, they reviewed film caught on a security camera that showed two black bears roaming around their porch and searching through a trash can for discarded food.

On May 13 Florida's Governor Ron DeSantis announced fellow Republican Cord Byrd as the new Secretary of State for Florida. Byrd is a long-time ally of the governor and has been supportive in getting SB524 - the Election Integrity Act - signed into law.

The Price of Oil Has Dropped 15% From Its High, but Gas Just Hit a New Record High in Florida – $4.47 per Gallon

Florida's drivers have become used to the price of gasoline steadily increasing. It was put down to oil shortages as a knock on from the pandemic when oil companies slowed down production. Then the Russia-Ukraine conflict reduced the supply of Russian oil as sanctions took hold.

She claims the media are "obsessed with another country" On May 12 Representative Marjorie Taylor-Greene of Georgia was grilled by a journalist from the Washington Post, who challenged her on having voted against multiple proposals to send financial aid to the Ukraine.

Dr. Ladapo calls out a lack of communication from the FDA. Dr. Ladapo and Gov. DeSantisTwitter of FLSurgeonGen. On May 12 Florida's Surgeon General Joseph Ladapo wrote to the Food and Drug Administration (FDA) requesting clarity over when parents with young infants can expect the current shortages of baby formula to ease. It follows weeks of shortages, which have seen stores limiting sales of baby formula to ration out supplies amongst all who need them.

May 11 to May 17 has been designated as National Police Week across the U.S. and Florida will be observing it fully, recognizing the importance of the state's police officers and law enforcers and giving them the acknowledgment and gratitude they are due.

On May 12 it was confirmed that from this week onwards, some taxpayers in Georgia will begin receiving automatic refunds expected to total around $1.1 billion. The refunds were announced in March of 2022 when Governor Brian Kemp signed legislation (HB1302) that will return the funds as a one-time windfall payment to taxpayers who have filed a tax return in 2020 and 2021 tax years.

Viral superstars thrilled to meet the one-hit wonder. There are many stars of popular music who have become famous with one song, and then quickly faded away leaving the world wondering "where are they now"? One such person is the rapper Vanilla Ice - also known as Robert Van Winkle - who shot to fame with the catchy rap tune "Ice Ice Baby".