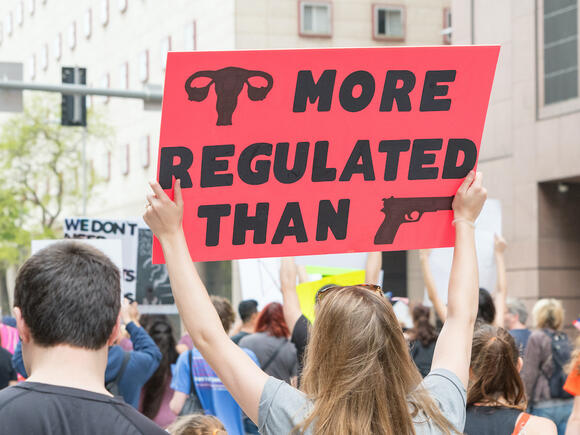 Just days after Texas announced its controversial new laws that effectively withdrew abortion rights for women and incentivized Texans to inform on those who enable abortions, the Mayor of Portland, Oregon took a stance.

Mayor Ted Wheeler proposed a ruling that would boycott city business with Texas, and which banned employee travel to the state. Portland had spent around $35 million on goods and services from Texas in the past 5-years and the proposal was intended to send a message of disapproval.

Texas has been witnessing a backlash from within the Lone-star state, and beyond:

While the anti-abortion Texan law continues to attract controversy and federal legal intervention, the proposal from Portland has been modified - it goes before the city council on September 15. Mayor Wheeler has had to walk it back significantly, and instead city officials are to consider setting aside $200,000 that will go to organizations “that deliver programs and services related to reproductive healthcare.”

It is not yet clear where these organizations are to be established or how Texan women can access the services if the council approves.

States and corporations have been keen to make their own stance on the Texas law clear.

Uber and Lyft, the companies behind the ride-hailing apps have announced that they'll cover legal fees if any of their drivers are sued under the new laws.

Meanwhile, the law may yet be dismantled as unconstitutional. There may yet be hope for women in Texas (and other hardcore Republican-ruled states that have expressed a desire to follow the lead of Texas in introducing similar laws). On September 9 the Attorney General Merrick Garland announced that the Justice Department has filed a lawsuit against Texas for its new abortion laws which he described as 'clearly unconstitutional'.

The world continues to watch with interest and states like Portland who clearly object to the actions of Texan lawmakers are clearly motivated to find ways to express their displeasure.

Avid dog lover, Cassandra Bergeron of Alabama recently shared a video to her TikTok page (@cassventures) as she flew 27 puppies from Alabama to Florida, in a bid to save the animals from being euthanised. Ms Bergeron and 2 of her friends were flown by a pilot aboard a light aircraft from Enterprise, Alabama to Orlando, Florida together with the animals who were destined to be destroyed.

A large Eastern Rat Snake has been photographed, stretched out along a tree branch in Congaree National Park, SC. A Facebook post from October 10 featuring the photo has gone viral after park rangers used it as a reminder for people to be careful when they encounter animals in the wild.

Green energy to be used in one of the most polluting industries. In Pueblo, Colorado major steps of progress have been made this month for both the local economy and the environment. The Russian steel processing company, Evraz has announced its intention to remain in the area following confirmation that the energy needed by the plant's electric arc-furnace.

A North Carolina man who rarely plays the lottery has just discovered his ticket won a share of the September 29 Cash 5 Jackpot - after taxes and withholdings he's $138k richer!

Cybercrime has been a big problem around the world in 2021, and South Carolina is having more than its share of problems. The FBI office in Columbia has reported that over $40 million has been lost to criminals online already in 2021 - more than was lost in whole of 2020. The trend is worrying to say the least.

Patriotic Kenny with his new scooterGoodwordnews.com. A 79-year-old Navy Veteran from Willernie, Minnesota - Kenny Jary found himself stuck at home after his mobility scooter failed recently. The veteran who'd served aboard the USS Okinawa was rendered immobile by the breakdown - meaning he could no longer get to church or meet his friends for coffee.

It was announced on October 7th that Carnival Cruise lines will resume sailing from Charleston, SC from January 13th 2022. It comes as welcome news for the city and its businesses who benefit from cruise passengers passing through, but also for those looking to vacation on board.

South Carolina Teacher Smacked in the Back of Her Head as Part of October TikTok Challenge – A New Low for Social Media?

Officials from Lancaster County school board have issued warnings to parents of their students on October 6 after an elementary school teacher in the district was smacked in the back of the head by a pupil in the classroom. The assault appears to have been carried out as part of a 'TikTok challenge' for the month of October - school kids are being encouraged to capture film of themselves smacking teachers.

On October 5th while making an official visit to Texas, Idaho's Governor Brad Little found the time to tweet a warning to his Lt Governor Janice McGeachin - that when he returns he will be reversing her executive orders, issued in his absence:

On October 3rd, Florida's Governor Ron DeSantis appeared on Fox TV to talk about the seriousness of the border crisis and the surging numbers of illegal immigrants crossing into the USA illegally. As he shared his views on Twitter, commentators were quick to point out that at this point his concerns seem irrelevant given that his state itself doesn't have any international borders.

South Dakota Revealed as a Tax Haven for the World's Billionaires, Super-Rich and Financial Criminals

As Florida Passes 54,000 COVID Deaths As Governor DeSantis Removes All Restrictions Across the State

Florida Mayors warn of dire consequences that could follow from DeSantis' reckless decision. On September 27, Florida surpassed a grim 54,000 deaths from COVID-19. While the number of cases and hospitalizations is dropping steadily, alarmingly the number deaths remains at around 300+ per day where it has been for months.

Expressing outrage at anti-abortion, anti-choice laws. Almost a month after Governor Abbott's new Anti-abortion laws took effect in the state of Texas, protesters have taken to the streets to express their outrage. On October 2nd there were mass-protests from those who feel that the laws are an erosion of women's rights and freedoms of choice.

Texas is already a significant force in the global economy - it has the 9th largest GDP in the world, ahead of many nations including Canada. It's now making moves to become even more financially significant by becoming a US center for Bitcoin and cryptocurrency.

When Taylor Soper of South Carolina looked out into his parents' back yard on September 30, he wasn't expecting to see the sight that confronted him. He watched as a gigantic alligator, ate (or rather, swallowed-whole) another, smaller gator.

On September 27 it was announced that Terran Orbital will invest $300 million in the building of the world's largest commercial spacecraft facility, in Merritt Island. The announcement, broadcast by Governor Ron DeSantis brought was welcomed as good news for the state - external investment is likely to bring jobs and other commercial opportunities as well.

And two other American families place second and third. When Sam Walton founded Walmart in Arkansas in 1962, he didn't probably expect that it would achieve the success it has. Just 59 years later, and the Walton family has just topped the list of the World's Richest Families, with a net worth of $238.2 billion.

Alligator muralPhoto by Eric Christian King on Unsplash. Sep 29 - Floridians are waking up to the latest viral video on the Internet - of a Florida man wearing socks and slides, trapping an alligator using only his trash can.

The Iowa firm New Cooperative, admitted this week that it has been the latest victim of a large-scale Cyberattack - a ransomware attack by the BlackMatter consortium of cyber criminals. BlackMatter infected New Cooperative's systems with ransomware, and demanded a ransom of $5.9 million before they would return control of the network.