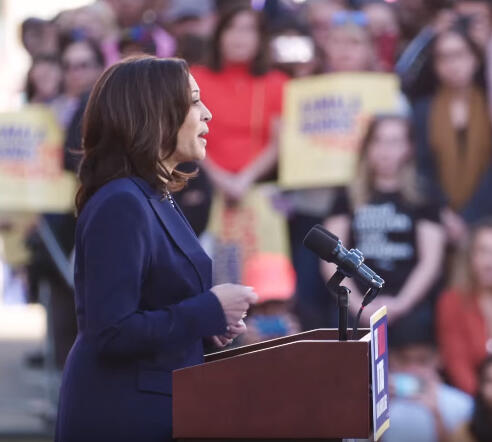 In April this year, Miami nurse Niviane Petit Phelps was arrested by Secret Service agents after she initiated an online campaign of hatred and threats towards Vice President Kamala Harris.

On September 13, Phelps pleaded guilty to the six-count felony and now faces 5-years in jail as punishment for her crimes.

Six Videos and a six-count felony

Phelps began recording deranged video tirades against the Vice President just a few days after the inauguration ceremony in early 2021. She recorded and sent six videos to her husband who was himself incarcerated in Wakulla Correctional Institution, after being convicted of a 1996 armed robbery and murder of a grocery store owner.

In the videos Phelps threatened that she would assassinate VP Harris within 50 days, and that she'd received a sum of $53,000 to kill her. She also shared photos of herself with one of her three children with her at the shooting range.

Phelps also insinuated in the videos that the Vice President was not actually black - having been born to a Jamaican father and Indian mother. She also referenced a conspiracy theory that's now been disproven - that Harris placed her hand on her purse rather than the ceremonial bible during the swearing in ceremony in Washington DC earlier this year.

When such threats are made and expressed so vocally and threateningly, law enforcement agencies cannot afford not to take them seriously and respond accordingly. Nonetheless, circumstances may have prevailed in Phelps' life which caused her to detach from reality.

After being charged for the offence, Phelps lost her job of 20 years. The struggles of raising three kids single handed with her partner in jail must have also presented a pressure. Nonetheless, the seriousness with which her actions has been taken by law enforcers demonstrates that such threats and erratic actions cannot and will not be tolerated.

Phelps will be sentenced in November.

Gov. DeSantis announces funding for nursing educationGovRonDeSantis on Twitter. On May 16 Florida's Governor Ron DeSantis announced funding of $125 million that will be earmarked for the education and training of nurses in the state. Speaking at a press conference together with Florida's Senate President Wilton Simpson and Surgeon General Joseph Ladapo, the governor affirmed his commitment to ensuring there are enough qualified nurses to meet the healthcare needs of Floridians long into the future.

Thinking of Selling Your Home and Leaving Florida? A Survey Says Sellers Will Get the Best Price by Selling on May 23

Getting the best price for your home is a matter of timing. Woman moving homePhoto by Zachary Kadolph on Unsplash. It now seems that the cost of living in Florida is out of control, in part due to the escalating cost of housing. Democratic challenger for the gubernatorial election was recently quoted as saying that "Floridians can't afford Florida anymore" and a big part of that is the rapidly rising rents and property prices in the state.

In response to the recent hot weather in Texas, the Energy Reliability Council of Texas (ERCOT) issued an appeal to customers on May 13, to turn up their thermostats in order to protect the supply of electricity across the state.

A Florida couple were woken up suddenly, late on May 10 as the alarm on their covered porch was triggered. Unsure of what might have set off the alarm, they reviewed film caught on a security camera that showed two black bears roaming around their porch and searching through a trash can for discarded food.

On May 13 Florida's Governor Ron DeSantis announced fellow Republican Cord Byrd as the new Secretary of State for Florida. Byrd is a long-time ally of the governor and has been supportive in getting SB524 - the Election Integrity Act - signed into law.

The Price of Oil Has Dropped 15% From Its High, but Gas Just Hit a New Record High in Florida – $4.47 per Gallon

Florida's drivers have become used to the price of gasoline steadily increasing. It was put down to oil shortages as a knock on from the pandemic when oil companies slowed down production. Then the Russia-Ukraine conflict reduced the supply of Russian oil as sanctions took hold.

She claims the media are "obsessed with another country" On May 12 Representative Marjorie Taylor-Greene of Georgia was grilled by a journalist from the Washington Post, who challenged her on having voted against multiple proposals to send financial aid to the Ukraine.

Dr. Ladapo calls out a lack of communication from the FDA. Dr. Ladapo and Gov. DeSantisTwitter of FLSurgeonGen. On May 12 Florida's Surgeon General Joseph Ladapo wrote to the Food and Drug Administration (FDA) requesting clarity over when parents with young infants can expect the current shortages of baby formula to ease. It follows weeks of shortages, which have seen stores limiting sales of baby formula to ration out supplies amongst all who need them.

May 11 to May 17 has been designated as National Police Week across the U.S. and Florida will be observing it fully, recognizing the importance of the state's police officers and law enforcers and giving them the acknowledgment and gratitude they are due.

On May 12 it was confirmed that from this week onwards, some taxpayers in Georgia will begin receiving automatic refunds expected to total around $1.1 billion. The refunds were announced in March of 2022 when Governor Brian Kemp signed legislation (HB1302) that will return the funds as a one-time windfall payment to taxpayers who have filed a tax return in 2020 and 2021 tax years.

Viral superstars thrilled to meet the one-hit wonder. There are many stars of popular music who have become famous with one song, and then quickly faded away leaving the world wondering "where are they now"? One such person is the rapper Vanilla Ice - also known as Robert Van Winkle - who shot to fame with the catchy rap tune "Ice Ice Baby".

As campaigning heats up for Florida's gubernatorial election in November 2022, it was reported on May 10 that Governor Ron DeSantis added over $10 million to his campaign war-chest in the month of April alone - $10.45 million to be precise.

Gov. DeSantis Signs Bill That Will Save Floridians $200 Million of Tax on Gas – But Not Until October 2022?

Fuel tax savings just before the gubernatorial election - coincidence?. The various sales tax holidays signed into Florida law by Governor Ron DeSantis on May 5 are intended to save Floridians up to $1.2 billion in the coming months. It's a significant amount of money, but may seem like a drop in the ocean for those who are struggling to make financial ends meet right now.

Passenger Lands Plane at Florida Airport After Pilot Gets Sick – They Had No Previous Flying Experience!

A passenger aboard a propeller plane got more than they bargained for on May 10, after their pilot got sick and was incapacitated - they had to land the plane!. The passenger aboard the single engine Cessna 208 had called for help over the radio when it became clear that the pilot on board was unable to control the aircraft. With guidance from air traffic control, they were able to guide the plane safely in to land at Palm Beach International Airport.

It "speaks of a tremendous ignorance" according to the governor. Following an announcement on May 9, in Florida November 7 will hereafter be known as 'Victims of Communism day' after the signing of house bill HB395 into law.

A Polk County Animal Shelter Is Desperately Searching for Foster Homes for Pit Bulls – It’s Running Out of Space!

A Polk County animal shelter - the Polk County Bully Project - is appealing for foster homes to take on some of their stock of pit bulls and related breeds, after reaching breaking point, it was reported on May 9.

"In Florida, we will tell the truth about communism" After signing bill HB395 into Florida's law on May 5, Governor Ron DeSantis announced that November 7 will be designated as annual 'Victims of Communism Day' in Florida.

Has the Republican-turned-Democrat raised enough to mount a challenge?. It was reported on May 9 that Charlie Crist - one of the Democratic-hopefuls for this November's gubernatorial election - raised over $1 million in April via his political fundraising efforts. It was the second consecutive month that such a sum had been raised via his official campaign fund and his independent political action committee known as 'Friends of Charlie Crist'.

The housing crisis currently facing Florida is well-publicized, and politicians across the state are being asked to step up to help those in need. Nikki Fried - Democratic challenger for the gubernatorial election has gone on record to state that "Floridians can't afford Florida anymore".