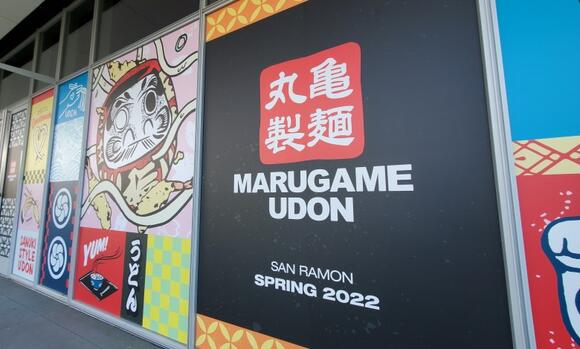 Big news for noodle lovers! Marugame Udon, an upscale noodle place that has its origins in Japan, appears to be getting ready to open very soon at City Center Bishop Ranch in San Ramon, California.

Towards the end of 2021, the restaurant put large posters on the window of its upcoming storefront at City Center saying that the Japanese noodle eatery would arrive soon. For a while, it just looked like a blank storefront with a bunch of wall-sized posters, and there was no indication of when Marugame would arrive.

As of last weekend, however, construction appears to officially be underway on the interior of the storefront. On a recent visit, I saw workers beginning to assemble kitchen equipment and other accouterments needed for the interior.

The posters on the outside had also been updated. A new poster included a message about hiring, with a QR code that potential employees could scan to schedule an interview.

There was also a QR code that visitors could scan to apply for a giveaway featuring free noodles for life. I don't know about you, but if I received such an offer, I feel like they would lose a lot of money on me. I love all kinds of noodles, udon especially.

I was thrilled to learn that Marugame Udon was on the way, but some of the restaurants at City Center have taken as much as two years to open after announcing their plans. It's great to see that Marugame seems like it should be here sooner. I haven't been able to confirm an exact launch date, but based on the status of construction, I would expect to see them launch in the next 2 to 3 months.

Check out my blog http://www.bayareatelegraph.com for more local food stories and follow me here on NewsBreak.

Mendo Farms Launches Healthy Bowls, Which Are Great For Lunch

Looking for a tasty, filling lunch in the Bay Area that’s still healthy? Maybe you started the Mediterranean Diet in the New Year, and you’re looking for an easy lunch out that’s diet-compatible?

Note: Love + Chew sent me a box of cookies to review but I was not paid for this post and this is not a sponsored story. Love + Chew is a local Bay Area women-owned company that makes fantastic superfood cookies. The “superfood” in the name comes from the fact that they use chia seeds in most of their cookies, and many people consider chia seeds to be a superfood.

The Bay Area has been seeing historically rainy weather over the last few months. On top of that, tons of indoor playspaces are closed due to Covid-19–especially smaller ones without the space for social distancing.

The Mill on Brown is Nearly Complete

For months now, every time I’ve walked down Mount Diablo Road in downtown Lafayette, I’ve noticed a big housing development going up. The Mill on Brown is one of several major housing projects in downtown Lafayette that are either planned or underway. A series of high-end condos on the West side of town kicked off the trend, and a wide variety of new housing options are coming to downtown soon.

These Mysterious Signs Appeared in a Store Window in Lafayette

Two mysterious signs recently appeared in an otherwise nondescript shop window in downtown Lafayette, California. The first one reads “Come Closer and I’ll Tell You a Secret” and the second–just across the windows–reads “Everything is About to Change.” The storefront is located at 3393 Mount Diablo Boulevard.

Question for Your: What's your favorite item to order at Jack's? Let me know in the comments. I really love Jack's restaurant in Pleasant Hill, even though I've only been going there for a few months. As I've shared before, they have tasty, affordable, delicious options for breakfast, as well as any other meal of the day.

Santana Row is Decked Out for the Holidays

The popular Santana Row shopping center in San Jose is totally decked out for the holidays. Festive trees, lights, wreaths and other holiday decorations are everywhere. There are even several large, illuminated animal sculptures, including a festive giraffe at one end of the row, and an elephant at the other.

Credit: Peter Kaminski, Creative Commons Attribution 2.0. Many high-end perfumes use a special ingredient called ambergris. It adds a scent note of its own, but also helps other scents last longer and stay suspended in the air. This elusive ingredient is expensive, costing as much as $7,000 per pound. According to Insider, a group of fishermen once landed a 280-pound chunk of the stuff while out at sea. It netted them a cool $1.5 million (pun very much intended).

Note: The author sent me a free copy of this cookbook to test. Hanukkah is a holiday celebrating an ancient miracle; when a small group of underdogs known as the Macabees took back the Jewish temple in Jerusalem from an occupying army in 165 BCE, legend has it that a tiny amount of unsoiled oil burned for eight days and eight nights until the temple could be restored and more oil produced. Each year, Jews around the world commemorate the miracle by lighting menorahs (these originally used olive oils), singing songs, and engaging in all manner of other celebrations.

How are towns and businesses around the Bay Area decorating for the holidays?

Pleasant Hill holiday treeOriginal photo by the author. Towns around the San Francisco Bay area are beginning to deck themselves out for the holiday season. Trees, lights, menorahs and other holiday displays were being installed over the last weeks of November leading to the Thanksgiving holiday.

The company was one of the originators of Generative Adversarial Networks, the technology behind Internet sensation ThisPersonDoesNotExist.com as well as numerous more practical generative AI systems.

Will Broadway Plaza Bounce Back From Massive Alleged Theft In Time For the Holidays?

A massive and well-publicized retail theft at Nordstrom in Walnut Creek last week left many in the town shaken. As many as 80 robbers wearing dark clothing carrying pepper spray reportedly broke into the store, threatening and in some cases allegedly assaulting employees and making off with handbags and other valuables.

Who is To Blame for California's Record High Gas Prices?

If you filled up your tank in the Bay Area in the last few weeks, you've probably noticed something: a major pain in the pump. Gas prices have skyrocketed across the country, but here in the Bay Area, they are the highest in the USA.

Someone Is Putting Anti-Biden Stickers on Bay Area Gas Pumps

Is Chick-Fil-A Coming to Hawaii?

It's an understatement that the American fried chicken chain Chick-Fil-A has a devoted fan base. People in America, and especially in the South, wait for the opening of new restaurants from the chain with bated breath.

Will rain disrupt the Bay Area's Thanksgiving this year?

With many Thanksgiving gatherings moving outside during Covid-19, many in the Bay Area are probably wondering if it’s going to rain during the holiday. Although we badly need rain to help fight the drought, a big storm would probably be the fastest thing to ruin a Thanksgiving gathering--other than grumpy relatives having an overly-political dinner table conversation, of course.

Trader Joe's, the upscale supermarket chain, evokes tons of positive memories and experiences for many shoppers. The store does very little advertising, yet it has a devoted fan base on social media, many of whom love the chain's bespoke prepared food and playful, local options.

COIN Lets You Mine Cryptocurrencies by Driving Around

Over the last few weeks, I’ve been testing the COIN app, which allows you to “geomine” cryptocurrency just by driving around. Essentially, the app tracks your location and then lets you monetize that location data by allowing COIN to sell it on your behalf. In exchange, you get tiny bits of the app’s proprietary COIN cryptocurrency, which you can then exchange for XYO down the line.

Bay Area drivers’ fearfulness about driving in the rain is exceeded only by their incompetence. It feels like every time there’s even a tiny drizzle here in the Bay Area, drivers go skidding off the roads left and right, causing all manner of delays and putting themselves and others at risk.