Offering an inside view of the Utah real estate market for relocation, retirement, and/or investment.

Welcome to the #1 Real Estate Market in the U.S. 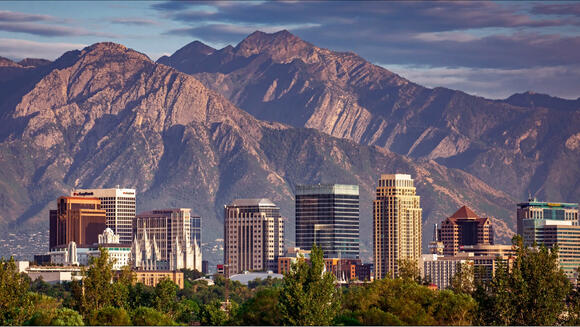 Obviously, I am leaving a lot out because I don't want to ramble on, and this is only the first of many articles spotlighting this beautiful state.

Now, let's get back to that heading above. In the beginning of 2022, Salt Lake City was named #1 Real Estate Market by Realtor.com, in the entire United States. If you don't live under a rock, you'll know that the housing market across the whole nation has been out of control - some areas more than others.

This particular area has had such a drastic climb since 2021, where homes would barely last a few days before they had multiple offers on the table, with offers well above asking price. From personal experience, I saw my own clients make offers for 30K, 40K, up to 60K above asking price, and we didn't even get a peep - true madness!

I wanted this first article to welcome you to this market, and give you an inside look into Salt Lake City, mainly the downtown area. In addition to this medium, I do invite you to look me up on all social media platforms by searching @theactorsellinghomes - I post regularly on them.

A quick Google search on population numbers in this area, will show you that the Salt Lake City Metropolitan area sits at a little over 1.24 million residents. This figure, of course, is counting the rest of the Salt Lake County boundaries, that encompasses the downtown area to the north, Magna to the west, Bluffdale and Riverton to the south, and cities like Millcreek, Sandy, and Draper along the east bench.

However, today we're talking about the 200,000+ that call Salt Lake City, or the downtown area...home - and why it keeps growing, and climbing in property values.

There's an allure to living in the downtown area of any major city, be it New York City, Miami, or Chicago. SLC, while smaller, has the same effect. As a real estate agent, I've seen the interest in Salt Lake City grow by leaps and bounds. Although some may complain that SLC doesn't have the nightlife that some of those 'Big' cities may have, it is still a vibrant and active area. Home to the University of Utah, and Westminster College, many college students enjoy the nightclub seen, the expansive gastronomy, and entertainment that the downtown area offers. Hashtags like #SaltLakeCity #SLCfoodie, among others, will give you a good idea on what to do to have a fun time.

Being a millennial myself, the insights and analytics from all my social media content, shows that my video content, as well as IG posts, have been mostly viewed by a large amount of millennials making a change to the Beehive state. Most are relocating here from areas around the country that have simply become too expensive to live in. It isn't just Californians coming to Utah and paying cash for homes. Just a few minutes ago, I received a call from a new client from New Jersey, who wants his company to transfer him to the Salt Lake area.

In the last year, I've had clients flying in from states like Florida, New York, Massachusetts, California, and countries like New Zealand, Chile, Canada, even from Tunisia in northern Africa.

The keyword here is 'Affordability', Utah is still an affordable state, where you can still qualify for a home. Although some current prices of homes may scare some people, the cost of living in this state is still better than practically everybody else.

Let me give you an example of what your money can get in the downtown area. In fact, I'll give you some examples of recent properties that I've walked through - you can view these video walkthroughs here through the Newsbreak App, as well as other social media platforms.

I get many requests from viewers, wanting a more urban vibe, or urban living. To those, I spotlight properties in the likes of condos, townhomes, and some single family homes, if available. Here's a fun one, about a year ago, the former owner of the Utah Jazz listed their condo on the 29th floor of 99 West, a luxury residential high rise, across the street from Temple Square, and just above City Creek Center, one of the coolest indoor/outdoor shopping malls in the nation.

This listing was priced then at $14,500,000, yes, pricey, but consider that same property in a larger market where it would easily demand a higher price tag, in the likes of 20MM, 40MM, up to 100MM, as we've seen in places like New York City, LA, Chicago, and Miami.

Recently, I also walked through a complete remodel of a 70s townhome near the state capitol building, 5 minutes up from downtown. It was a stunning property listed at a little over 1 Million.

However, it's important to note that there are still properties - mostly condos - that still can be found in the downtown area in the mid to high 500s. Also, since the downtown area tends to be older, you won't find a lot of new construction available. Like the million dollar townhome, you would either have to find a remodeled property, or buy something and fix it up.

This area also includes The Avenues, going uphill toward the Capitol. Properties in this area were built as early as the late 1890s and into the early 1900s. While small, and some outdated, they are gold mines if you can get your hands on one of them, and remodel it. Further up the hill, and behind the capitol building, you will find newer construction - mainly 80's and 90s - the will be in the 1M+ range. This neighborhood had former Utah Jazz player, Karl Malone, as a famous resident in the 1990s.

In conclusion, if you are looking for that urban lifestyle, with an ideal proximity to shopping, fine dining, night clubs, Broadway shows, Opera, and quick access to dozens of hiking trails - the Salt Lake City downtown area will not disappoint. It may come at a higher price point, but that's why you will reach out to me, and I will help you get what you seek - whether it's starting in the mid 500s, or going well into the millions.

Offering an inside view of the Utah real estate market for relocation, retirement, and/or investment.

If you head south from the downtown area on Interstate-15 (I-15 for locals) for 25-30 minutes, you will reach one of the most desired, scenic, and affluent sections of the Salt Lake Valley - nestled on the south east corner.