The latest breaking news and analysis about United States politics, elections and government. 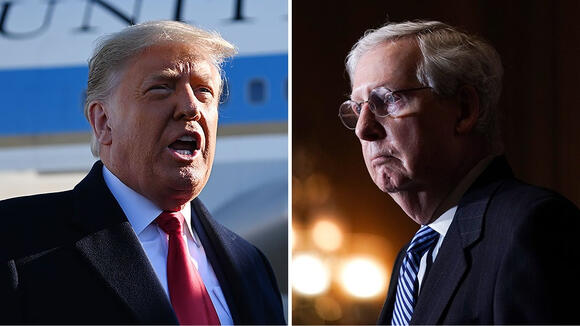 Former President Trump on Tuesday slammed Senate Minority Leader Mitch McConnell (R-Ky.) as “overrated” due to his support of the bipartisan infrastructure package the upper chamber is poised to pass.

“Nobody will ever understand why Mitch McConnell allowed this non-infrastructure bill to be passed. He has given up all of his leverage for the big whopper of a bill that will follow," Trump wrote in a statement. "I have quietly said for years that Mitch McConnell is the most overrated man in politics—now I don’t have to be quiet anymore."

“He is working so hard to give Biden a victory, now they’ll go for the big one, including the biggest tax increases in the history of our Country,” Trump added.

The fiery comments from the former president come hours before the Senate is set to vote on, and likely pass, the $1.2 trillion bipartisan infrastructure package, culminating months of negotiations between lawmakers in both parties and the White House.

McConnell is likely to vote for the bill Tuesday morning after voting to end debate on the measure Sunday night.

The bill is expected to pass, with roughly 20 Republican senators voicing support for the package.

Senate Majority Leader Charles Schumer (D-N.Y.) announced on Monday that the Senate will “immediately” turn its attention to the second half of the Democrats' infrastructure priorities, a multitrillion-dollar reconciliation bill, once work on the bipartisan package is complete.

Democrats are looking to pass a $3.5 trillion budget resolution focused on what some have dubbed “human infrastructure,” such as funding for education, public housing, clean energy efforts and expanding health care.

They plan to pass the measure through budget reconciliation, which would sidestep a potential Republican filibuster by requiring only a simple majority for approval.

Before the upper chamber can pass the budget resolution, however, the senators must open the floor for up to 50 hours of debate and endure an hours-long session known as a vote-a-rama, where senators are allowed to force a vote on any proposal they wish.

Senators, however, are reportedly in discussions about yielding back the majority of their debate time and moving quickly to the vote-a-rama session.

The latest breaking news and analysis about United States politics, elections and government.

More from The Wired Eye

Republican Florida Gov. Ron DeSantis said Monday that the state’s board of education could withhold the salaries of superintendents and school board members who mandate wearing masks in schools.