The Urbanist is a Seattle-based online publication seeking to examine and influence urban policies. We believe that cities provide unique opportunities for addressing the most difficult problems we face. Our website serves as a resource for sharing ideas, creating community, and improving the places we live.

Pierce Transit has restored its on-demand microtransit service “Runner” to the Ruston area and added a new zone in the Tideflats. The two zones essentially cover much of Downtown Tacoma, Ruston, areas near Ruston Way/Schuster Pkwy, and the industrial tideflats of Tacoma. Pierce Transit also operates a similar service to the military bases called “JBLM Runner”.

The service is flexible and provides a public transportation option to riders in areas where traditional fixed-route bus service might not perform well and where service is otherwise limited. Riders can request trips within Runner zones by mobile app, phone, or walking up if space is available. Within a zone, riders can book trips between a preferred pick-up point and destination. One of the pick-up or drop-off locations must be at Tacoma Dome Station or Commerce Street Transit Center. The Runner fleet entirely consists of vans, which can carry a bike and are wheelchair accessible. 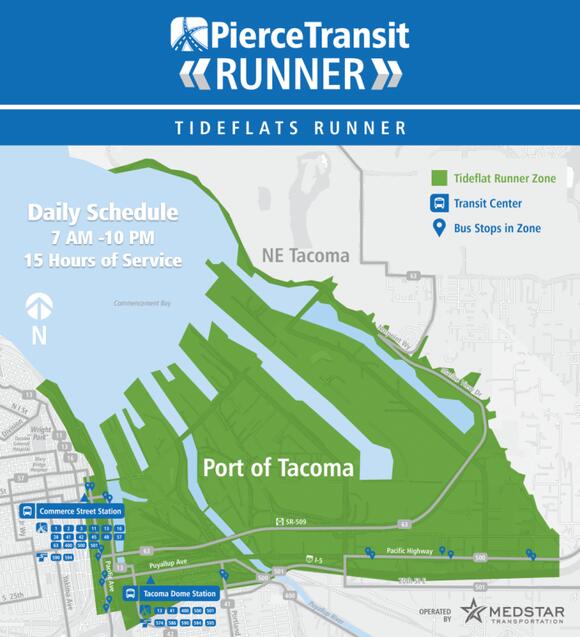 The Tideflats Runner service area, which envelopes the Port of Tacoma. (Pierce Transit) 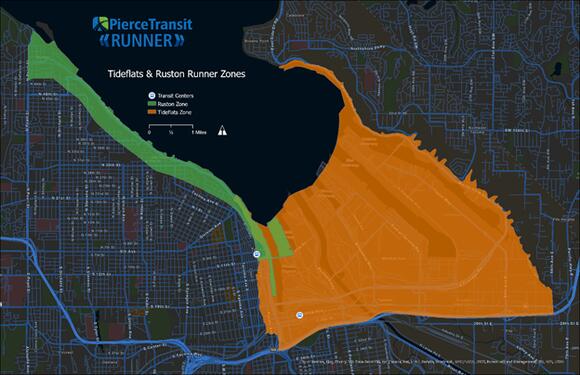 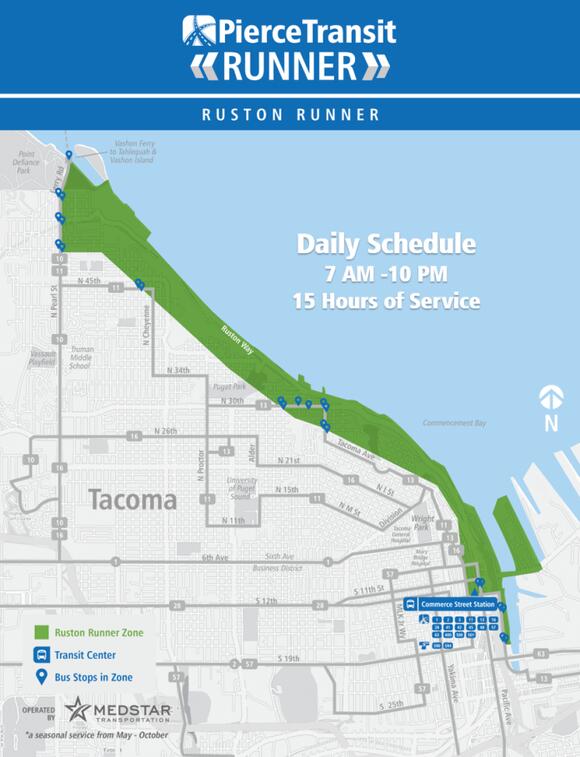 The Ruston Runner zone is mostly a long strip. It includes parts of the Town of Ruston, Point Ruston, Ruston Way/Schuster Pkwy, and Tideflats along the Foss Waterway as well as the transit corridor in Downtown Tacoma and Tacoma Dome Station. Service operates seven days a week from 7:00am to 10:00pm. This service had originally been launched in August 2020 but it was suspended in April of this year due to Covid.

The Tideflats Runner zone is much broader including most of the Tideflats industrial and maritime area along Commencement Bay. This area reaches as far south of I-5 and covers Downtown Tacoma and Tacoma Dome Station. Service also operates seven days a week from 7:00am to 10:00pm.

Trip requests can be made through the “Goin” app and selecting “Pierce Transit Runner” or calling 253.270.1340. The cost per trip is $2.00 for adults and $1.00 for youth and persons with a Regional Reduced Fare Permit. Since there are no fareboxes equipped in vans, riders can either present a pre-purchased All Day Pass, ORCA card, or valid mobile fare procured through the “Passage: Transit Ticketing” app.

The Urbanist is a Seattle-based online publication seeking to examine and influence urban policies. We believe that cities provide unique opportunities for addressing the most difficult problems we face. Our website serves as a resource for sharing ideas, creating community, and improving the places we live.

More from The Urbanist

On October 6th, news spread of Kathy Lambert's racist attack mailer against her opponent Sarah Perry.(Image by Lambert campaign, photo courtesy of Kirkland Reporter) The King County Council could get a shakeup this election, and those odds went up last week as Republican incumbent Kathy Lambert lost her Seattle Times endorsement after sending out a racist mailer. The ad depicted her opponent, Sarah Perry, as a marionette doll controlled on puppet strings by County Councilmember Girmay Zahilay, the only Black member on County Council. Vice President Kamala Harris, Senator Bernie Sanders, and Seattle City Councilmember Kshama Sawant are also pictured at the puppet-master level.

In May 2020, police gathered in large numbers to ensure a Chinatown encampment was swept and cleared in rapid fashion.(Photo by Enrico Doan) Every major public sector union has cut a deal with the City of Seattle to implement the Mayor’s Covid vaccine mandate, but the Seattle Police Officers Guild (SPOG) is the odd one out. SPOG continues to fight the mandate, and its vaccination rate continues to lag.

Sound Transit welcomes all to the newly extended "1 Line" at Northgate Station.(Credit: The Urbanist) At 4:51am Saturday morning, the Northgate Link extension officially opened to the public. Many riders were in attendance for the occasion rising to cheers, whistles, and claps as the 1 Line welcomed them aboard and visited its three new stations. Families, neighbors, and transit enthusiasts filled platforms, but the train cars generally had seating freely available, so it wasn’t packed by any means, not that you’d expect that Covid or not for such an early opening.

Mayor Durkan delivered her budget speech via pre-recorded video in 2020, citing the Covid risk. She is doing the same in 2021.(City of Seattle) Mayor Jenny Durkan released her budget Monday and sent Deputy Mayor Shefali Ranganathan to deliver brief remarks on the proposal to the Seattle City Council. In brief, the budget funds more cops, but skimps elsewhere — casting aside lofty rhetoric about “the urgent need to scale the resources to shelter our unsheltered neighbors,” making “record investments in undoing generational harm that we’ve seen through institutional racism,” and the importance of “promoting equity and investments in tackling climate change” delivered by Ranganathan in her remarks.

On Monday the Seattle City Council voted in favor increasing protections against economic evictions.City of Seattle. On Monday, the Seattle City Council had a busy — and consequential — day of voting on council bills related to renters’ rights in the face of steep rent increases. The Council also voted on an ordinance related to density bonuses for religious institutions building affordable housing. By the end of the session, the Council voted to pass all three pieces of legislation, although not without some discussion and last minute hashing out of details. All councilmembers were present for the votes with the exception of Debra Juarez (District 5) who was absent.

Amazon Kicks in $7.5 Million for the Eastrail Recreational Trail

Sketch of what the Eastrail trestle segment might look like when complete with the Bellevue skyline in the distance.(Credit: King County) Tech giant Amazon is partnering with King County to fund completion of the Wilburton and Wilburton Trestle trail segments in Bellevue, contributing $7.5 million to the projects. The trail segments stretch from the NE 8th Street Eastrail overcrossing to the I-405 Eastrail crossing. Collectively, the trail segments are a key part of the Eastrail program because they will tie central and southern portions of the trail together. When all is said and done, the Eastrail is slated to offer 43 miles of continuous trail from Renton to the Snohomish County line.

The Sound Transit expansion is bringing light rail to Northgate in early October 2021.(Credit: Sound Transit) This summer in the lead up to decision-making on whether or not to delay projects promised in the Sound Transit 3 measure, the Northwest Progressive Institute (NPI) released results from a poll conducted by Change Research Institute. Their data showed 71% of polled Seattle voters expressed support for a new transit funding measure to avoid ST3 delays. Fortunately, the Sound Transit board voted for a hybrid realignment plan that avoids the most substantial delays, keeping promises made to area residents largely intact.

Police barricade during a June 3rd Defund SPD March at Seattle City Hall.(Photo by Doug Trumm) The Seattle Police Department (SPD) has a $15 million budget surplus resulting from a high rate of officer attrition over the past two years. With Mayor Jenny Durkan’s backing, Councilmember Alex Pedersen (District 4) introduced an amendment to the mid-year budget update that would have allocated $3 million of the surplus toward an officer retention program and $15,000 hiring bonuses for transfers from other police departments. The amendment was rejected by the council, 7-2, with only Debra Juarez (District 5) voting in support in addition to Pedersen.

Streetcars Can Thrive in Seattle with Simple Improvements

First Hill Streetcar with Smith Tower in the background.(Credit: Doug Trumm) Line extensions into neighborhoods like Belltown and the Central District are part of a set of solutions that would improve Seattle’s streetcars.

EcoTHRIVE to Pilot New Model of Affordable Housing in Burien

Is it possible to create deeply affordable housing for people making less than 30% of area median income (AMI) without relying on ongoing public subsidies? Nonprofit EcoTHRIVE believes so, and they are seeking to acquire land in Burien to test out their hypothesis. If all goes well, the result will be the transformation of an oversized single-family lot into a “resilient village” of tiny houses owned by residents through a limited equity cooperative.

In 2021, Seattle could see the largest number of traffic fatalities in 15 years, according to new data from SDOT.Ryan Packer. Seattle is on track to see a huge increase in the number of people killed by traffic violence on its streets in 2021. The Seattle Department of Transportation (SDOT) Vision Zero team broke the news to the Levy to Move Seattle Oversight Committee Tuesday evening. So far this year, 21 people have died in crashes due to the shortcomings of our transportation system. Based on the trends identified in the presentation, Seattle could see 35 people lose their lives by December 31st.

CA 29 is over, but the debate over how to end homelessness is not. A three-judge panel from the Washington State Court of Appeals has declined a stay request from the campaign for “Compassion Seattle” City Charter Amendment 29 (CA29) that would have blocked King County Superior Court Judge Catherine Shaffer’s order to remove CA29 from the November ballot.

Mayor Jenny Durkan announced she wasn't running for reelection in December 2020, but boasted she would win if she did. She has since been embroiled in a scandal over destroying public records. (Photo via Mayor's office)

Metro Increasing Security Officers at Transit Facilities and on Buses

Fare enforcement officers were clapping down on fare evaders in fall 2019. (Photo by Doug Trumm) King County Metro has announced plans to increase security onboard buses and at transit facilities this fall. The agency is bringing on dozens of new transit security officers (TSOs) in an effort aimed at enhancing safety and security across the transit system.

Rail advocates All Aboard Washington (AAWA) have published a new 2021 Vision Map illustrating their hopes for rail expansion in Washington State and beyond. (Credit: Avgeek Joe)

A pavement to parks project completed in Little Saigon represents an example of one type of project the Seattle Office of Economic Development is seeking to support through its Neighborhood Recovery Fund. (Credit: Seattle Department of Transportation)

The Seattle Planning Commission, a volunteer advisory board who serve as stewards of Seattle's comprehensive plan, have issued their recommendations for updating the plan to meet the city's needs. (Credit: Maëlick, Creative Commons)

Regular Night Markets Are a Natural Addition to Seattle

The Richmond Night Market is a popular fixture in British Columbia's Lower Mainland. (Photo courtesy of Visit Richmond) With over a year of Stay Healthy Streets and Café Streets, Seattleites have become accustomed and even approving of the pedestrianization and expanded use of our streets. But Seattle can go farther to create even more vibrant pedestrian environments, and regular night markets should be one route for street use expansion. Popular in East Asia and Southeast Asia, night markets are often street markets that open or remain open in the later hours of the day. These markets aren’t limited to streets; they inhabit a mix of parks, public squares, parking lots, cavernous indoor spaces, and anywhere else people can gather, shop, walk, and dine. Nighttime street markets would be an intuitive evolution of the city’s usage of our streets and public spaces, as they would be similar to farmers markets with hours that stretch into the night, and with a stronger emphasis on eateries.

The Plaza Roberto Maestas in Beacon Hill is an example of social housing. (Photo by Doug Trumm) Policymakers get ahead of themselves sometimes, especially when it comes to the complicated world of housing policy. How often do we stop and ask if our system can produce the results we seek — things like stability, affordability, quality, equitable access, and narrowing the racial wealth gap? Will tinkering work or do we need to overhaul the whole system? A cold look at the facts raises some real questions about the viability of our current system, and increasingly progressive leaders are talking about major interventions in the housing market.