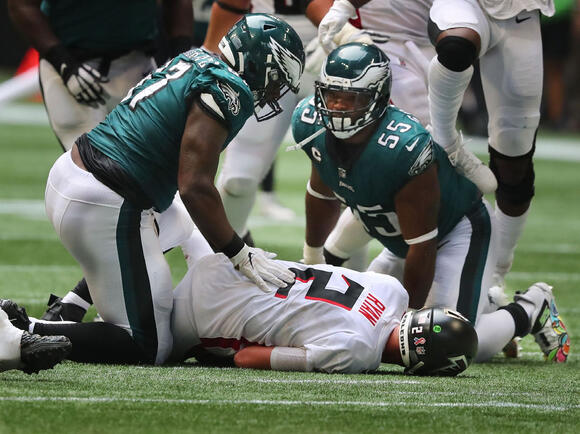 After their dominant win over the Atlanta Falcons in their season opener, the public opinion of the Philadelphia Eagles seems to be changing.

Jalen Hurts kicked off the year with a bang, throwing for 77% completion, 264 yards, and 3 TDs en route to a 26-point victory -- the largest margin of victory for the Birds since their Super Bowl year. Heisman winner DeVonta Smith made his mark early, being the first Eagles receiver to catch a TD in his NFL debut since 1990.

First regarded as a lock for a top-five draft pick, the Eagles now seem poised to make a run at the division title this season. It’ll be a tough road ahead with the 49ers and Chiefs in the coming weeks, but here's a look at where the Eagles rank after Week 1:

"Have we all been sleeping on the Eagles? Nick Sirianni's debut went off like gangbusters, as Philly took it to the host Falcons on both sides of the ball in a 32-6 laugher. Jalen Hurts looked very much like a starter the Eagles can put their faith in, throwing for 264 yards and three touchdowns while adding 62 yards on the ground. DeVonta Smith caught a touchdown in his NFL debut, and the defense limited the Falcons to just 4.1 yards per play. A greater challenge lies ahead against the 49ers in Week 2, but the Eagles look like a confident team ready for the fight."

"A spirited debut from Nick Sirianni and Co. Jalen Hurts, who, for one week, looked nothing like a soon-to-be-replaced bridge quarterback on a tanking football team. While the Falcons are, perhaps, more of a mess than we initially thought, Hurts was smooth and worked middle distance throws to all thirds like a seasoned professional. Philadelphia’s defensive front can still be a great equalizer for this club, which, thanks to a Ryan Fitzpatrick injury and a painfully milquetoast offering from Jason Garrett in New York, will end up being a bigger factor in the NFC East than initially expected."

"Well, one game won’t cement Hurts’ spot in the team’s Hall of Fame, but the way he played in the team’s 32-6 win against the Falcons on Sunday could portend a better-than-expected performance in 2021 from both Hurts and the offense at large. (Also, the fact that Hurts and Sirianni have their own secret handshake can’t hurt.)"

"The reigning Heisman Trophy winner caught a touchdown on his first NFL reception and paced the Eagles with six catches for 71 yards in a convincing win over Atlanta. His six catches are tied for the most by an Eagles rookie in a debut since DeSean Jackson in 2000. Smith led all Eagles receivers in snaps (58), further evidence he is viewed as their lead receiver. Smith's elite footwork allows him to gain separation off the line of scrimmage, and he knows how to find an open pocket in the defense. He should have big-time production this year so long as he stays healthy."

"No team rushed for more yards in Week 1 than Philadelphia's 173, a good indication the offensive line is back and might fuel a better-than-expected season."

"The Jalen Hurts era is off to a great start. He was impressive in beating the Falcons. If that continues, this team will be a playoff threat."

"Jalen Hurts was one most impressive players of Week 1. DeVonta Smith looked great. The Eagles as a whole were very good. They're healthy and let's be honest: Doug Pederson might have turned into a bad coach by the end. Like a lot of Week 1 results, it's tough to know exactly what this means for the Eagles going forward, but that was really good."

Ranking at 23rd at worst is a significant improvement over where the Eagles hovered coming into the season. The Eagles have a good test ahead of them when the 49ers come to town on Sunday.