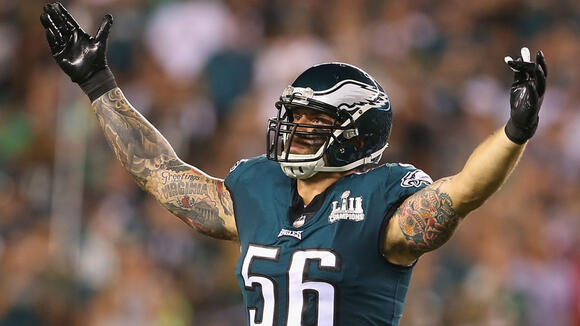 The two spoke about the situations with Carson Wentz and Ben Simmons, and Long talked about the culture shock between cities from St. Louis to Philadelphia.

"But when you get to a place like Philly, I just felt like they adopted me, man. I was like, 'Oh, this is the NFL.' And the sick joke of it was, I'm in Year 10. So I never got to really experience something like that my entire life. And I was like, 'Well, at least I'm going to make the best of it.” - Chris Long

Chris Long was a tremendous vet for the Eagles. Alongside the valuable things he brought to the locker room, he was still a significant contributor to the Eagles’ defense during his tenure here. The way he instantly adapted to the Philly culture was tremendous, and Long had some words for those currently playing in the city.

"Players don't know how lucky they are, I think, to be in a place like Philly. I would've - if I could've kept playing a long time there, I would've played 'til the wheels fell off." - Chris Long

This isn’t the first instance of Chris Long praising the city and their fan base. Just a few days before this, he appeared on the Not For Long Podcast with Carolina Panthers tight end Colin Thompson and called Philly fans the best football fans in the world.

With all of the criticism towards fans following the Ben Simmons situation, it’s nice to see a former Philadelphia athlete come to their defense. Meanwhile, for the Eagles, they’re continuing to prepare for their home opener on Sunday against the San Francisco 49ers.