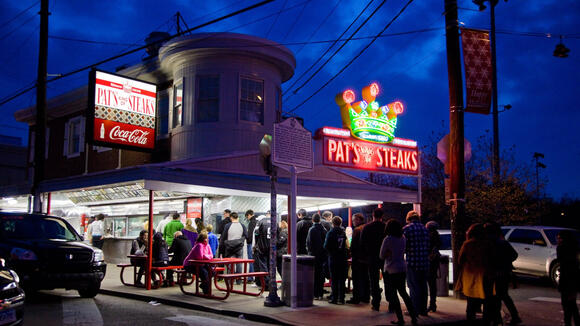 Yesterday morning at the infamous Pat’s in Philadelphia, a deadly shooting occured after two men were arguing over the New York Giants and the Philadelphia Eagles. The shooter was eventually caught and arrested later that evening. Geno's got the entire thing on video and the two cheesesteak joints worked together to track down the suspects.

“Witnesses told Philadelphia police that an Eagles fan and Giants fan began fighting just before 1 a.m. Thursday outside the cheesesteak shop at 9th and Wharton streets (right off Passyunk Avenue), Philadelphia Police Chief Inspector Scott Small said. There were six or seven people waiting in line for food at the time.

The one man -- who has red hair and was wearing a Philadelphia Eagles jersey -- then shot the other at least once on the sidewalk area near where people can sit at picnic tables before hopping into a van driven by a woman and driving off, Small said”

This is embarrassing to see, the banter between two rival fans should never go this far, and it’s heartbreaking to see someone lose their life from it. Thursday morning’s tragedy is the second shooting incident at Pat’s in the last year, but luckily nobody during the shooting in December lost their life.

Remember, people, sports are never that serious. They’re supposed to be for entertainment.