76ers reportedly not interested in a Ben Simmons-CJ McCollum trade 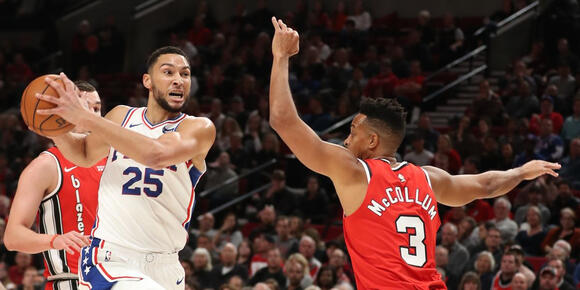 McCollum likely isn’t enticing enough to pry Ben Simmons from Philadelphia, even though their salaries virtually match. Olshey is known to be close friends with Daryl Morey, his counterpart in Philadelphia, but that friendship won’t be a factor whether Morey considers a McCollum-based offer, even if the pot is sweetened with young players such as Simons or Little.

This report lines up with the fact that Morey will not be trading Ben unless he gets an All-Star in return. For Morey, he seems to be patiently waiting until Portland’s other guard Damian Lillard becomes available to move Simmons. Many analysts have suggested moving Ben for CJ McCollum, and it makes no sense for the 76ers.

Even though the other side assets would be attractive, it is nowhere near enough for Simmons. Over the last few weeks, some of the offers the Sixers have declined included Malcolm Brogdon, Collin Sexton, Kevin Love, and draft picks, Marvin Bagley and Buddy Hield, and numerous others.

During the 2021 season, CJ McCollum averaged 23 points on 46% shooting and 40% from three. While his regular season was a success, CJ dwindled in the playoffs, shooting 4/16 from three over the course of their last two games against the Denver Nuggets.