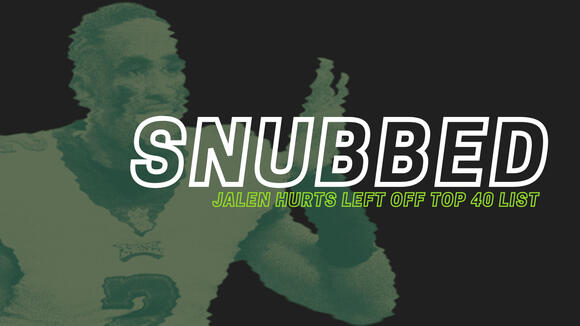 Chris Simms is an enemy to the city of Philadelphia. Earlier today, the NFL Analyst revealed his top 40 quarterbacks going into the 2021 season. From the jump, this list was already all sorts of horrible. Simms had Tom Brady behind Dak Prescott in tenth while Jared Goff sat in 31st behind Taysom Hill and several others. Arguably the biggest snub from the list, Eagles starting quarterback Jalen Hurts.

To say he isn’t in the top 20 or so is entirely understandable, but the sophomore quarterback ranking this low is criminal. Let me list you some of the names that Simms has above Jalen Hurts.

Growing up, Marcus Mariota was my favorite quarterback, and it wasn’t even close. I was all-in on moving the farm for him to come to Philadelphia, but sadly his NFL career hasn’t panned out. Numerous bad seasons with the Tennessee Titans led him to become a backup QB with the Las Vegas Raiders. Mariota had ONE appearance last season, a loss to the LA Chargers in which he threw for 226 yards and an interception. But yet, he still cracks the list.

Tyrod has played a grand total of four games since the 2017 season and played just once in the last two seasons. Granted, he has received the worst stretch of bad luck for a QB in recent memory that led to losing both starting jobs, but it’s criminal to still put someone who barely has seen the field in four years ahead of Jalen Hurts.

WHO? Kellen Mond was the Minnesota Vikings THIRD round draft selection in the 2021 NFL Draft. The Mississippi State QB has some decent potential but has yet to play a single NFL snap and is not going to anytime soon with Kirk Cousins on the roster. You can argue some of the others a bit but Mond being on this list is baffling. I can understand some of the top rookies like Trevor Lawerence, Zach Wilson, and Trey Lance, but a third-round backup has no right to be on this list.

Looking at the remainder of this list, former Eagles quarterback Carson Wentz is 18th on this list, right behind 2020 first pick, Joe Burrow. Back in December, Simms said this about Jalen Hurts.

“But, yeah, the throwing is still a concern. There are still throws where I just go, ‘That doesn’t look good.’ It’s a very slow, deliberate delivery. Even on the interception … the ball took so long to gather and throw the ball. The guy was open. He should’ve gotten rid of it before he got hit… With Jalen Hurts, he kind of sits there, no movement with [his body], and it’s kind of all just in the arm. There’s no shoulder movement. There’s nothing else like that.”

Now granted, Jalen Hurts is not the perfect player, obviously. He has his flaws like any other quarterback. Simms has been around the NFL to know what he said above is a bit ridiculous. Almost every rookie quarterback’s decision-making slows down during their first few NFL starts There is a major skill jump in coverages and timing between college and the NFL especially going from Oklahoma to the Philadelphia Eagles. Another issue many have with Hurts is his ball security, and while it was a significant issue, that is easily coachable, and these two problems can quickly be resolved.

This list should give Jalen Hurts a chip on his shoulder if it hasn’t already. Many are doubting the Eagles’ QB, and he will for sure be out to prove everyone wrong outside the city of Philadelphia when the 2021 season kicks off in a few months.