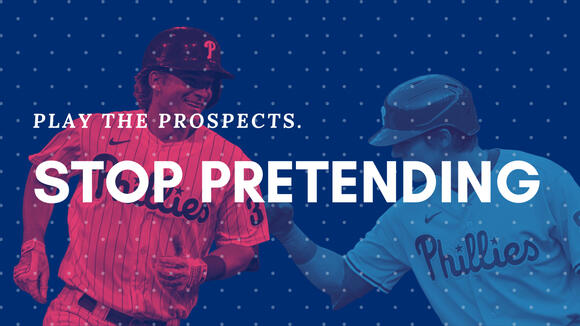 The Phillies got swept in a two-game series against the Washington Nationals on Tuesday and Wednesday. In both games, they should have won. In game one, they lost 3-2, and yesterday, they blew a five-run lead AND a four-run lead, ultimately losing the game 13-12 after Hector Neris blew another save.

As we inch closer to the end of June, only one team in the National League East is above .500. The New York Mets currently lead the NL East with a 38-31 record. The Nationals have won 9-of-10 games and sit in second place with a record of 35-36. The Phillies and the Atlanta Braves are tied in third place, both five games out of first place.

After I watched the Padres and Dodgers game last night, it’s as clear as day that the Phillies are nowhere near being contenders for yet another MLB season. It’s been a decade since the Phillies have made the playoffs and that streak will surely continue this year.

If you’ve been following The Liberty Line and more specifically, my baseball content, you are well aware of how painful it is for me to say that on June 24th of the 2021 MLB season.

Now that we have the above written down, let’s stop for a second and ask ourselves what the Phillies are doing for the remainder of the season. The Phillies farm system lacks extreme depth. We all know that. The development of any prospect has been a struggle for years and it’s time we take a new approach.

Phillies management wants us to believe that this team is built to “win now” however that just isn’t happening. With that being said, why on earth are we not giving our prospects a shot to play on an everyday level? There is no reason whatsoever to have Ronald Torreyes and Brad Miller starting games in the middle infield instead of having younger players like Nick Maton and Luke Williams getting a shot to play every day.

When Nick Maton was called up from Lehigh Valley to the Phillies early on in the season, he was on fire. Maton slashed .316/.341/.468 with a .810 OPS. In his first 79 at-bats, he had two home runs, seven RBI, and two stolen bases. Through May 17th, Maton was top five in every major category for rookies in the National League.

I know Ronald Torreyes has played well this season for The Phillies. The 28-year old has slashed .270/.309/.713 with two home runs and 14 RBI in 89 at-bats this season. This is not a slight against Torreyes, but I would rather have 24-year old Nick Maton, a possible piece of the future, get every day at-bats and play shortstop or second base for the Phillies, a team that will lose both Didi Gregorius and Jean Segura in the coming years.

The same goes for Luke Williams. Williams burst onto the scene at the major league level after helping Team USA punch their ticket to the Olympics. Williams went 8-for-16 with a double, a triple, a home run, six runs scored, and six RBIs over the four-game qualifier for Team USA.

In the outfield for the Phillies, I never want to see Travis Jankowski starting another game for the rest of the season. Yes, I know Jankowski was a triple short of the cycle yesterday and had a three-run home run to give the Phillies an early lead against the Nationals. However, the 30-year-old outfielder is not a part of the Phillies' future.

The Phillies called up outfielder Matt Vierling last week and he should be playing when an everyday starter needs rest. It’s a very small sample size, but in 6 at-bats this year, Vierling is 3-for-6 with a run scored and a stolen base.

Why The Phillies wouldn’t throw Vierling into the mix instead of Jankowski is beyond me. This is a team that needs to see what they have in their minor leagues. Again, we are not World Series contenders. Give the young kid a shot at proving himself.

The game can be said about players like Spencer Howard, who the Phillies keep on an innings restriction due to velocity issues that haunt him every time he hits the fourth inning. It can be said about Hector Neris, who time and time again, shows us that he is not the closer to the future.

We could talk about David Hale, Sam Coonrod, or Brandon Kitntzler, three relievers who have pitched poorly over the last few seasons but still get a shot to come out of the bullpen for the Phillies instead of younger arms from the minor leagues, but after watching Hale get sent to the mound with the bases loaded yesterday and letting up a grand slam, I’d rather not. The performance speaks for itself.

After a decade-long drought from the playoffs, I just want to see the Phillies try something new. Stop pretending that you are a contender in Major League Baseball and start developing and taking a closer look at the younger players inside your organization.