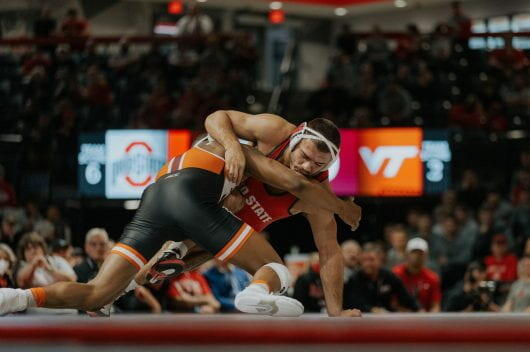 The No. 3 Ohio State wrestling team ventured west over the weekend as it competed in the annual Cliff Keen Invitational in Las Vegas.

The Buckeyes finished eighth out of 34 teams in the tournament, which head coach Tom Ryan said was their “lowest finish in years” after the team finished No. 2 last season and outside the top five for the second time in a decade.

Ryan cited injuries as a key factor in the team’s low finish, with top-10 ranked redshirt seniors Ethan Smith and Tate Orndorff not at 100-percent health. Freshman Jesse Mendez and redshirt freshman Paddy Gallagher also did not wrestle this weekend.

While Ryan didn’t disclose the specifics of the injuries, he said the upcoming holiday break will be important for his squad to get healthy.

“It was a tough weekend for us. Everything is fixable, but the main thing is we have to get healthy,” Ryan said. “The focus of this team right now is healing. We have to get healed up so we can train hard and get ready for this Big Ten schedule.”

It was a successful weekend for redshirt senior Sammy Sasso, as he highlighted the trip for the team, finishing 5-0 and earning first place in the 149-pound weight class.

Sasso bested Arizona State redshirt sophomore Kyle Parco in the final bout via a 6-2 decision. After earning the match’s first points late in the first period with a takedown, Sasso denied Parco the escape for the entirety of the second period, earning him a full two minutes of riding time.

He then built the lead to 4-0 with a reversal takedown in the third period. Parco showed fight at the end by matching Sasso with a reversal himself, yet it was not enough as the match finished 6-2.

“It felt good to compete like I know how,” Sasso said. “The confidence has always been there, but you have to do the right things all the way throughout. You have to get to bed on time. You have to eat right. Fixing those little things that I wasn’t doing perfectly definitely helps your mental state when you step on the mat.”

Sasso, who finished as the runner-up in the 2021 Cliff Keen Invitational, has found success since suffering a defeat in the team’s first dual meet. Since the Virginia Tech dual on Nov. 11, Sasso has earned four wins via fall or tech fall, three of which came from this weekend.

“You don’t want to be holding back and just looking for wins,” Sasso said. “When I’m at my best is when I’m attacking and trying to wrestle my hardest for seven minutes.”

Ryan described the trip as a “great weekend” for Sasso, and said he continues to place an emphasis on wrestling aggressively and putting pressure on his opponents.

“He’s a dangerous person to wrestle,” Ryan said. “It reinforced the belief system that he has.”

With Sasso writing the final chapter to his storied Ohio State career this season, he said he aims to be remembered with the all-time wrestling greats who have come through the Buckeye program.

“My name has been on FloWrestling and Twitter for a long time now. When someone competes against me, they want that win,” Sasso said. “They’re going to bring their best every time. I have to do the same.”

Sasso was not the only one who found success in Las Vegas this weekend. Redshirt senior Kaleb Romero continued his hot start to the season by earning himself a fourth-place finish at this year’s invitational.

Romero kicked off the tournament in dominant fashion by recording an 18-5 major decision, immediately followed by pinning Wyoming redshirt sophomore Brett McIntosh in the round of 16. He then edged out Virginia Tech redshirt senior Hunter Bolen for the second time this season in a narrow 3-2 decision.

Romero came up short of finishing in first place for a second-consecutive season at the invitational, as he fell to NC State redshirt junior Trent Hidlay in the semifinals.

In what FloWrestling described as the “ t oughest in-season wrestling tournament of the year , ” the Buckeyes got a chance to see some of the best talents the country has to offer and simulate March’s national tournament.

“You see a wide range of competitors that throw different things at you. The more tough things thrown at you, the better chance you have at figuring it out in March,” Ryan said. “We’ve been going to this event for quite a while because we learn a lot about our team.”

The Buckeyes look to build their momentum heading into the holidays as they take on the Kent State Golden Flashes Sunday at the Covelli Center beginning at 1 p.m. BTN+ will broadcast.