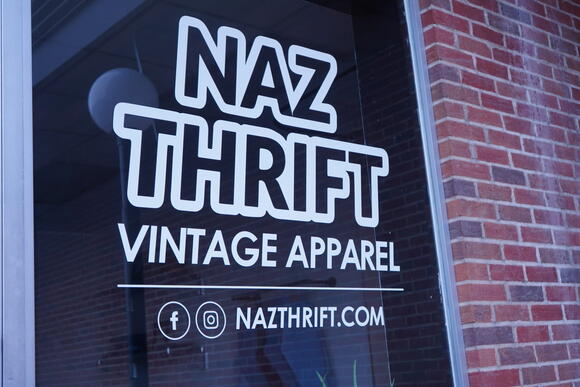 Davis, a 2019 Ohio State graduate, said she has thrifted her whole life and began selling her finds at several pop-up shops in 2020 before opening Naz Thrift in October. She said she opened a permanent location at 1617 W. 5th Ave. and is looking forward to building her business and growing a community.

“Having that space to where I can build relationships with the community because that really is what I love to do,” Davis said. “If I’m at a pop-up and say it’s not a busy pop-up, and I don’t really get to talk with anyone, to me that’s kind of like transactional and not relational. With the store, I’m just really excited about building a community there for Naz Thrift.”

When thinking of a business name, Davis said she learned in biblical times Nazareth was a place not known for good, even though Jesus grew up there. Inspired, Davis noticed a correlation with how some view secondhand clothing stores.

“At first I was like, that’s really cool, and that really aligns with like used clothing because some people think like used clothing is gross, like thrift stores don’t have anything good,” Davis said. “But then I was finding the hidden gems.”

Naz Thrift’s mission is to bring new life to clothing, Columbus residents and the streets. Davis said she does this by volunteering and donating 10 percent of Naz Thrift’s profits to the Columbus Dream Center — a nonprofit organization driven to provide low-income, homeless and underserved people.

Not only does Naz Thrift have a wide selection of vintage items, Arika Wadsworth, operations coordinator of Naz Thrift, said the store space will allow them to host DIY Denim classes too.

“We set up an entire class where people can destress, paint and put patches on their old denim and kind of refresh its look,” Wadsworth said. “That’s a new thing too that we’re really trying to tap into the Ohio State community with because it is such a fun thing for game day and just in general.”

Davis said the store also started Woman Up, a pop-up market designed to encourage women-owned small businesses while also pouring into the community, this year.

“We had five women-owned small businesses there, and it was a really cool experience,” Davis said.

Davis said some of the profits from the first two Woman Up pop-up markets were donated to Freedom a la Cart Cafe and Out of Darkness Columbus — organizations that help survivors of sex trafficking.

Wadsworth said a shared interest in thrifting allowed her and Davis to meet and strengthen their friendship within the last few years since meeting at Ohio State.

Wadsworth said she was excited and wanted to help Davis in any way she could after learning Davis wanted to start her business.

“It started like that just totally as friends,” Wadsworth said. “Then I started to be like, ‘Hey, I know that you mentioned you want to do a photo shoot, like if you want a model, I’ll do it. I’ll just come and hang out with you.’”

Wadsworth said her involvement in the business increased over time and working with Davis in the early stages taught and enabled her to make decisions as operations coordinator.

“I manage everything for Naz Thrift, from simply calendar and email all the way to assisting with events, concepting, like almost anything you can think of, I have my hand on it, and my finger on the pulse there just because I’ve been with Tayla from the beginning of Naz Thrift,” Wadsworth said.

Wadswasorth said Davis’ faith and commitment to help Columbus has benefited the community as a whole.

“She’s really passionate about building up Columbus, making it a place where people are welcome, where people are loved,” Wadsworth said. “She’s gotten me to actually come into the Dream Center, and I’ve gone with her to volunteer to do meals for homeless people, and I’ve gone to put some hands on work into the city, and it’s really rewarding and it’s community building.”

Davis said in the future, she has plans to grow Naz Thrift with programs to help with things, like employment and counseling, for the Columbus community.