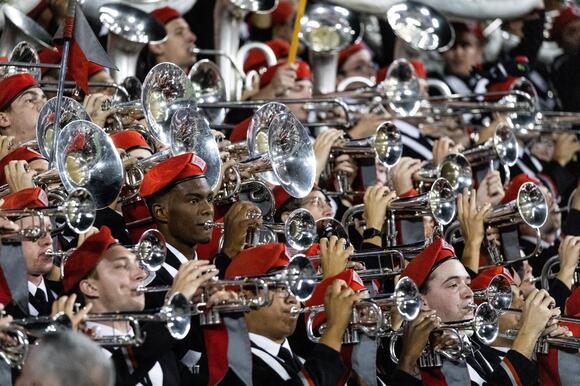 After watching the Ohio State Marching Band’s perform at football games or other events, some students find themselves wondering who are the people behind the instruments and what preparation they do.

Earning its title as “The Best Damn Band in the Land” is no easy feat. Even before the band begins to think about any technicalities, the music is the ultimate focus. The Ohio State Marching Band is praised for its clear, uniform sound — which for most bands is impossible to find.

“Members of the Ohio State band are probably some of the top drill learners and musicians in the country,” graduate assistant director Josh Reynolds said.

The band consists of four graduate students that act as assistant directors, and their work is essential to the band’s success, Reynolds said. Graduate assistants are responsible for not only writing the pregame shows for every game, but also teaching students the music each week, so they can play confidently on the field by Saturday.

Reynolds, a master’s graduate assistant in his second year with the marching band, said he co-wrote and choreographed the “Grease” halftime performance against Wisconsin Sept. 24.

During the end of their time with the band, production of the halftime shows falls on the graduate assistants, Reynolds said. Whoever writes the set is tasked with designing all of the fun, dynamic formations on the field, he said.

“For the ‘Grease’ show, I thought about the musical and what would make sense to put in the set,” Reynolds said.

For Reynolds, it was all about what he could do to make it entertaining and get the crowd involved, he said. He said he thought, “What can we do to make the crowd understand exactly what we’re doing and that will also get the point across of what we’re playing?”

It sometimes takes the graduate assistants a couple of weeks to get everything drawn up, approved and perfected, Reynolds said.

The student staff of Ohio State’s marching band is the essential piece that goes into making the whole operation progress from an idea to the product seen on game day.

“The student staff is the complete heart of the band,” Reynolds said. “If we didn’t have our team, the band would not function probably in any way.”

The marching band’s student staff is responsible for all the behind-the-scenes jobs. Everything from instrument checkout to uniform maintenance to audiovisual is managed by the student staff to produce the well-oiled show fans see on Saturdays, Reynolds said.

“I don’t think the public really knows what we do, because if we do our jobs well, you won’t even realize we’re there,” a 2022 graduate and squad leader Jacob Glorioso said.

One of the larger jobs the student staff has is recording and editing all band rehearsals, so the musicians can learn the sets faster, Glorioso said. Glorioso, who works in the multimedia office, said watching and playing along with the band’s recordings is important.

“We cover so much,” Glorioso said. “We set up rehearsal inside and outside, and we record all of the music pieces, so the band can get the songs down and then really focus on learning drill for the field.”

Another job student staff members are responsible for is instrument and uniform maintenance. When an instrument requires a minor cleaning or repair, students turn to student staff to get the job done, a 2022 graduate and assistant squad leader of Ohio State student staff Alyson McMahon said.

McMahon said the tasks range from something as small as a missing button to a rip in some pants. Students on uniform staff are expected to do 30-40 uniform fixes between Thursday and Friday, McMahon said.

“The band relies on us so much, especially on game day or when we travel,” McMahon said. “If someone forgot their entire uniform on a trip, which has happened, we are the ones that then will help them and get them what they need.”

Reynolds said the student staff members are a necessary piece of making the band successful.

“They are the true heartbeat of this band,” Reynolds said. “They are the ones that are typically behind the scenes and hidden, but without them, there is no way that we can work.”

Glorioso said despite not being a band member, he can appreciate the performances and role he played in their production.

“It’s little moments like that,” Glorioso said. “That make you stand back and say, ‘Wow, I didn’t write the show, I’m not standing out there marching and making a cool character on the field, but they are doing that because of what I could help them with.’”