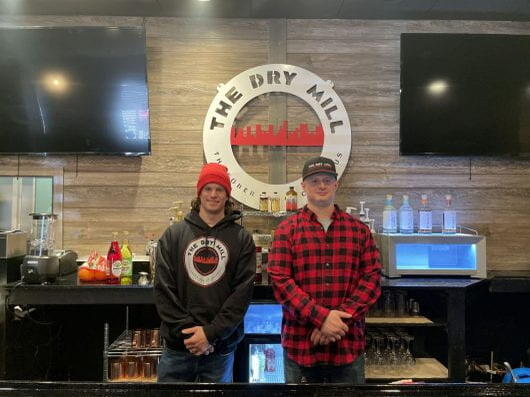 Colin Thomas (left) and David Payne (right) are the owners of The Dry Mill, Columbus’s first sober bar, which announced it is shutting down. Credit: Tyrik Hutchinson-Junior | Lantern Reporter

After opening its doors April 30, The Dry Mill announced it will be shutting down.

The Dry Mill was opened at 79 S. 4th St. by childhood best friends David Payne and Colin Thomas, who struggled with alcoholism in the past but are now sober. The bar cited Sunday the lack of sales as the reason for closing.

The owners’ goal was to have The Dry Mill be a positive and fun environment for those trying to get sober as the first-ever sober bar in Columbus. The Dry Mill gained notoriety after two articles from The Lantern featured the up-and-coming business.

“It saddens us to say this, but unfortunately we have to shut our doors and close The Dry Mill,” a post on their Instagram stated. “The past few months sales have declined and we cannot continue to operate the business based on the current levels of customers we are receiving.”

A date for the closure has not yet been announced. The Dry Mill expressed gratitude to its patrons, staff and all those who made their dream a reality.

“We witnessed people get sober in our building,” the post stated. “Our purpose was to help those who are sober or didn’t want to be around alcohol, and give them an environment where they felt safe. Meeting each of you and learning your stories is the reason we opened The Dry Mill.”