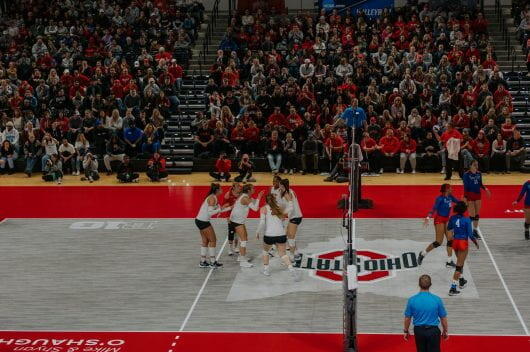 The Buckeyes (20-9, 15-5 Big Ten) defeated Ohio Valley Conference champion Tennessee State 3-0 in the first round of the NCAA Women’s Volleyball Tournament, with four players recording double-digit kills. Head coach Jen Flynn Oldenburg mentioned the importance of having so many hitters on the scoresheet.

“It says a lot about our offense and just the ability to get it to any hitter and them put the ball away,” Oldenburg said. “That was an emphasis that Mac [Podraza] and I talked about before the match is just, can we spread out our offense and get back to that type of play? Because it creates so much pressure on the other side.”

Among the double-digit scorers was junior opposite hitter Emily Londot, whose 10 kills were the fourth-most on the Ohio State team. She noted how the balanced offensive attack powered the Buckeyes against Tennessee State.

“When one hitter is succeeding and getting those kills, it takes the blockers away from somebody else,” Londot said. “There’s so much trust and confidence in each other that I think it doesn’t matter who the ball goes to. We know we’re getting that point because we trust every single one of our hitters to put the ball down and just play the way that Buckeye volleyball is meant to be.”

Podraza, who recorded two kills and 40 assists against the Tigers, was named Big Ten Setter of the Year Wednesday. Oldenburg explained what that recognition means for her team.

“It’s a testament to the respect that our team has earned overall for the entire season,” Oldenburg said. “We have a setter of the year; that means our hitters are putting the ball away.”

Rader was especially prolific in the second set — where she led the team with six kills — but she was quick to credit her teammates for her success.

“I was feeling pretty good,” Rader said. “Our passing was phenomenal tonight, so I think that’s what helped me terminate.”

This is Ohio State’s second-straight season hosting first and second round tournament matches, after defeating Howard and Tennessee at the Covelli Center last season. Coming off a four-match losing streak, Rader mentioned the crowd’s impact in getting her team back to winning ways in a high-stakes matchup.

“I think everyone here can win the national championship on any given day,” Rader said. “We have the best fans in the land, so we want to use that to our advantage.”

Another important factor in getting the Buckeyes back in the win column was their strong start in the first set. Ohio State began the set with five-straight points, en route to a 12-3 run.

As the Buckeyes progress in the tournament, Oldenburg said her team’s out-of-conference gauntlet and tough Big Ten schedule helps her team prepare for its upcoming challenges.

“Last year, the last two years, we got to the tournament, the first year, we didn’t know what we didn’t know,” Oldenburg said. “I think the pre-conference prepared us for the Big Ten, and that was the intent. And then the Big Ten prepared us for moments like these. So, playing top opponents and scheduling like we did, I think it sets us up for a good run here in the tournament.”