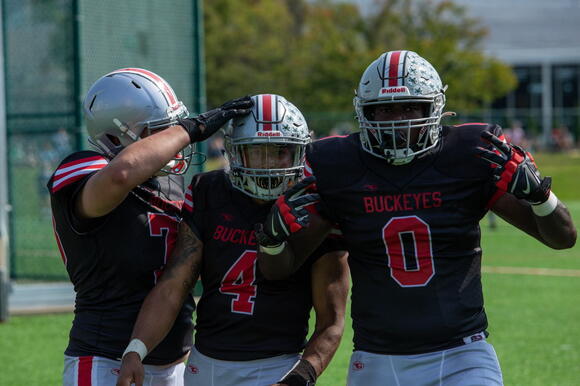 The No. 1 Ohio State club football team will be looking for its third-straight National Club Football Association Championship, facing off with No. 2 Gordon State Saturday.

Ohio State’s offense, led by fifth-year quarterback Kellyn Gerenstein, averages 41.8 points per game and has outscored the offenses of their opponents 376-107 this season. Gerenstein has thrown for 1,261 yards and 24 touchdowns in six games this season.

Gordon State provides a challenge to the high-flying Ohio State offense, however. Gordon State has given up the second-fewest points in the NCFA this season at 72, holding opponents to just eight points per game.

“Being able to identify where he’s at and being able to call our plays offensively around that is crucial,” Scroggins said.

Head coach James Grega said he believes Ohio State’s offense will be able to successfully move the ball on Gordon State’s tough defense, despite its speed and skill, but the Buckeyes will have to play their best football.

“We’re going to have to bring our A-game on offense — we have the best offense in the league, and they have the best defense,” Grega said. “We’ve got to make sure we don’t turn the ball over offensively and give them chances to score, but I think our speed is just as fast as theirs, especially on offense. We just got to execute and not make mistakes.”

Offensively, Gordon State recorded 216 total points, at 24 points per game. They are led by junior quarterback Neal Howard who has 1,038 passing and 224 rushing yards this season.

While Gordon State’s numbers on offense aren’t as explosive as Ohio State’s, like their defense, Gordon State provides a great challenge with their athleticism, speed and size.

“They’re a really fast team. They are quick, very aggressive and they like to attack from the outside,” Scroggins said. “They’re very athletic and very big up front. So, especially for us, it’s going be a battle on the line with their front seven versus ours.”

Grega said he believes the key to stopping the Gordon State offense is to set the edge on defense and to force them inside.

Scroggins said despite there being more pressure with the team going for their third-straight championship, their focus is on the task at hand right now, winning the game on Saturday.

“It is more pressure, but at the end of the day, it’s about us and it’s about right now,” Scroggins said. “It’s not about what happened in the past.”