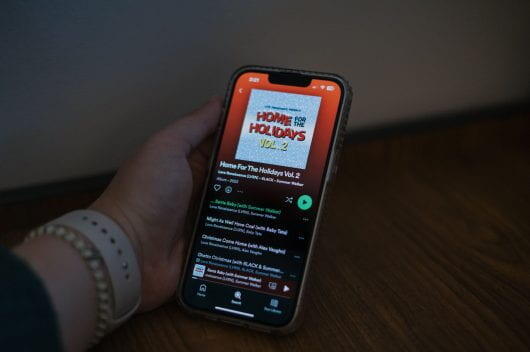 This 11-track project consists of only four new songs, as the other seven tracks were featured on LVRN’s original “Home For The Holidays.”

Following Summer Walker’s previously released rendition of “Santa Baby” comes an original song from Baby Tate, “Might As Well Have Coal” — a heartfelt track featuring Baby Tate wishing for love for Christmas, as everything else she will receive cannot replace it.

Alex Vaughn has an awe-inspiring performance with her take on the infamous “Christmas (Baby Please Come Home)” on “Christmas Come Home.” Vaughn’s performance is anthemic and genuine, which is sure to get the listener into the Christmas spirit.

Although it is featured on the original “Home For The Holidays” album, “Ghetto Christmas” with 6LACK and Summer Walker is the highlight of the entire project. 6LACK puts his own sound on this interpolation of James Brown’s “Santa Claus Go Straight To The Ghetto,” including his own original verse in the midst of the track.

dvsn, the Canadian R&B duo composed of singer Daniel Daley and producer Nineteen85, comes into the album with a beautiful take on “Let It Snow.” Daley’s angelic vocals add a layer of soul and passion that isn’t typically felt on other versions of the popular Christmas song.

The final newly released track on the album is Äyanna’s “Silent Night.” Like many other tracks on the project, the vocals are nothing less than immaculate, as Äyanna shows her impressive vocal range with a soft yet ardent performance.

“12 Days of Bhristmas” with OMB Bloodbath and WESTSIDE BOOGIE has to be the most hard-hitting trap version of “The Twelve Days of Christmas.” While the track still goes through the 12 days of Christmas, the gifts that were received are much different than that of the original.

Following Young Rog and DRAM’s cover of “Feliz Navidad” and a lighthearted skit by Kitty Ca$h comes “This Christmas” by Eli Derby. Derby’s vocals stand out greatly over the minimal instrumental on this Donny Hathaway cover.

The final track of the project is “The Christmas Song (Chestnuts Roasting On An Open Fire)” by DRAM. His deep, mellow voice maintains the song’s soothing aura and finishes the album in a calm, warm way.

The first volume of “Home For the Holidays” came out in 2020, a time when being home for the holidays was just about the only thing people could do. The second volume of this project reminds listeners of the feeling of normalcy that the first project provided while giving listeners a few more tracks to have this holiday season.

Similar to the first album, “Home For The Holidays Vol. 2” will surely boost spirits this year, as LVRN offers its mix of original tracks and incredible covers of notorious Christmas songs.