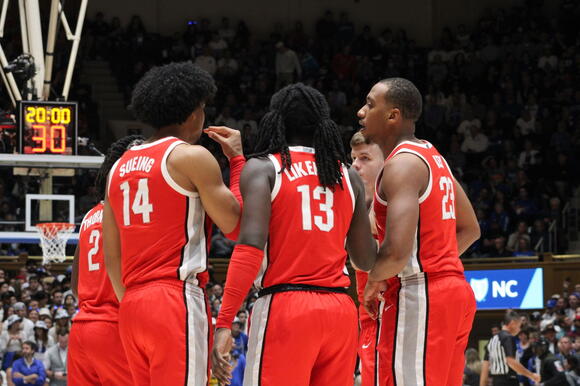 When junior forward Zed Key stepped onto the floor at Cameron Indoor Stadium, the early-arriving fans greeted him with loud jests as they yelled during pregame warmups.

Fans known as the “Cameron Crazies” packed the 80-year-old arena Wednesday where the No. 25 Buckeyes ventured for the first time in more than a decade. A team with 10 newcomers among its 14 rostered players, Ohio State’s chemistry was put to the test.

Key and the Buckeyes embraced a challenging, hostile road environment at No. 17 Duke in Durham, North Carolina, as dozens of Final Four and five national championship banners lined the rafters above.

Their 81-72 loss saw Key score a game-high 21 points and three Buckeyes foul out, including redshirt senior forward Justice Sueing, who had 12 points in 26 minutes. Ohio State nearly matched Duke’s top-10 rebounding effort 34-31 on the glass, and both scored 36 points in the paint.

“This is a historical place. They don’t lose here often,” Sueing said. “We have some things that are very easily correctable, so I think we’ll be able to build off of that.”

Ohio State started its same five players, which consisted of three players in their first year with the program, including freshman Bruce Thornton who scored 11 points at point guard.

Playing in an arena that carried so much history and intensity intrigued head coach Chris Holtmann going into Wednesday’s game, he said.

“We were really curious as a coaching staff,” Holtmann said. “I think once we settled in in the second half, we were much better.”

After seeing the Buckeyes trim a 13-point deficit to five with 3:06 remaining, Holtmann lauded the opportunity for future scheduling of home-and-home matchups.

“We need more of these kinds of things in college basketball, and I think even less neutral opportunities,” Holtmann said. “I know those are still going to exist, so I think it helps your team. It helps our game to play in these kinds of environments.”

Ohio State led by two points with 8:38 left in the first half, but turned the ball over 12 of its 16 times the rest of the way while Duke gained the lead for good. Despite the loss, Ohio State outshot the Blue Devils 47 percent to 45.

Adding Cameron Indoor Stadium to a list of venues, including the Maui Invitational playing against ranked teams — such as San Diego State and Texas Tech — Sueing said the Buckeyes will take away intangible skills as they enter the second month of the season.

“I think this game is much needed for everybody,” Sueing said. “Everyone on this team gels really well together, so being able to play in an arena like this with an environment as intense as it is, is only going to help prepare them for Big Ten play.”