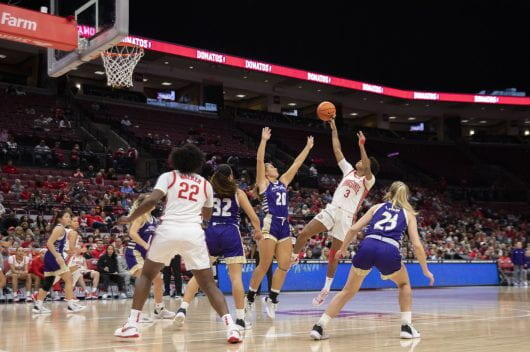 The No. 4 Ohio State women’s basketball team rallied from a 14-point deficit to beat No. 18 Louisville 96-77 Wednesday at the KFC Yum! Center. Three Buckeyes scored at least 20 points in the contest, led by senior guard Taylor Mikesell who scored 26.

After being undefeated through their first six games, the Buckeyes (7-0) faced their toughest road opponent so far this season. The Cardinals (5-3) entered the matchup with a program record 21-straight wins at home and had won their last 40 nonconference games at the KFC Yum! Center.

Louisville set the tone in the opening quarter, jumping out to a 12-3 lead by forcing five Ohio State turnovers in the first four minutes. After making only one of their first five shots, the Buckeyes rallied to make seven of their next nine attempts but still trailed 25-18.

The Cardinals only turned up the pressure in the second quarter. They created some separation after going on a 10-0 run, which included a pair of 3’s from junior guard Hailey Van Lith and graduate guard Chrislyn Carr.

Ohio State entered the game leading the country in turnovers forced per game, but the Louisville defense gave the Buckeyes a taste of their own medicine early on. The Buckeyes turned the ball over 12 times in the first half, only one less giveaway than they average per game this year.

Despite some struggles, the Buckeyes shot it well offensively, going 51.3 percent from the floor. Mikesell led the team with 12 points as they trailed the Cardinals 45-37 at the intermission.

In the second half, the Buckeyes returned to form. After Louisville scored the first five points of the third quarter, Ohio State went on an 11-0 run to cut the deficit to two, capped off by a Mikesell corner 3 which forced a Louisville timeout.

The two teams battled back and forth with effort on both sides of the ball. Louisville stayed in front until a Mikesell layup gave the Buckeyes a 61-59 advantage, their first lead since the opening minute.

From there, Ohio State never looked back. A 14-2 run to start the final quarter propelled the Buckeyes to a comfortable lead as they closed out the contest. Senior guard Jacy Sheldon scored 11 points on a perfect 4-for-4 in the period to finish off the victory.

Sheldon returned to action for the Buckeyes after missing the last two games with a lower leg injury. The Dublin, Ohio, native finished the game with 22 points, three assists and three steals.

Although she was dealing with a cold, redshirt junior guard Rikki Harris played 26 minutes off the bench for the Buckeyes and recorded two steals. The Indianapolis native said it was great for the team to win in the fashion it did, particularly relying on defense in the second half.

“We only played seven tonight, but any other night we can play up to eight or 10,” Harris said. “It shows our team and everybody that we can win in any environment. It just takes us, and as long as we stick together, we can win.”

Head coach Kevin McGuff said Harris was “spectacular,” as the team needed her rebounds and effort diving for loose balls to get the win.

“She’s the heart and soul of our team in many ways just from a competitive character standpoint,” McGuff said. “We have a lot of weapons offensively, but we need somebody to do that and that was huge for us tonight.”

Ohio State continues to build an impressive resume in the early stages of the season, picking up its second win over a ranked opponent this season.

The Buckeyes look to keep their momentum rolling when they open Big Ten play against Rutgers Sunday at noon in Jersey Mike’s Arena. The game will be broadcast on Big Ten Network.