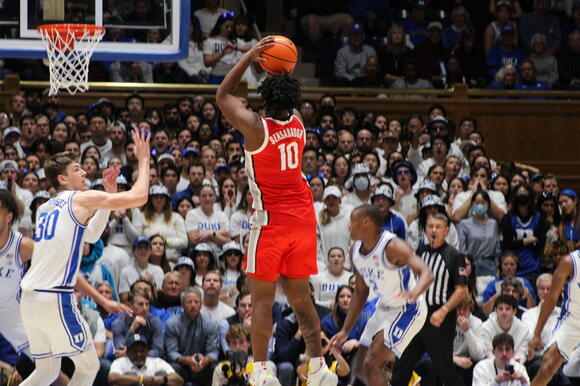 No. 25 Ohio State (5-2) never led in the second half despite cutting a 13-point deficit down to as few as five with 3:06 to go. Junior forward Zed Key scored a game-high 21 points.

Filipowski made a turnaround layup while fouled by redshirt senior forward Justice Sueing, and No. 17 Duke (7-2) outscored the Buckeyes 9-5 the rest of the way.

Graduate guard Sean McNeil scored the first five points of the game as the Buckeyes led by as many as six points within the first three minutes.

Ohio State committed four fouls between 7:12 and 4:35 in the first half, prompting head coach Chris Holtmann to take a timeout.

Seven lead changes ensued in the opening period as the score locked three times. Ohio State held the score advantage for 8:11 in the first half, leading by as many as six points less than three minutes into the game, but Proctor and Duke didn’t allow their lead to slip.

Five Blue Devils scored in double figures, while four did so for Ohio State.

After its 24th season, the ACC/Big Ten Challenge is in its final year.

The yearly crossover contest between the two conferences concludes after the Big Ten reached a new media agreement last summer. The ACC will connect with the Southeastern Conference to form the ACC/SEC Challenge starting next season, according to ESPN .

Duke earned nine wins in the ACC/Big Ten Challenge, most among any program.