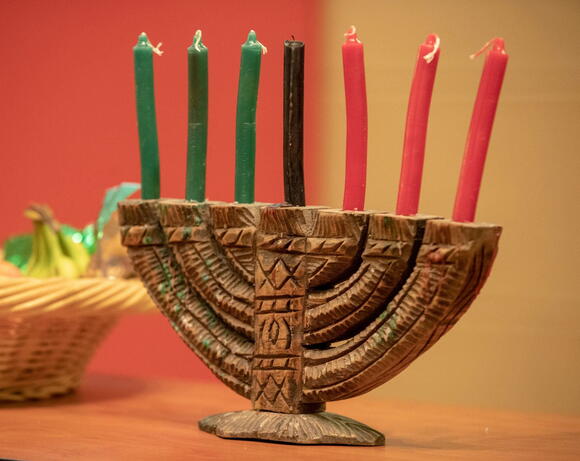 The Frank W. Hale Jr. Black Cultural Center will hold its 30th-annual Pre-Kwanzaa event Friday from 6-8 p.m. in the Hale Center to commemorate the holiday celebrating African American culture from Dec. 26 to Jan.1, 2023.

Kwanzaa is an African American and Pan-African holiday first celebrated in 1966, according to the National Museum of African American History and Culture . Program coordinator Taylor Washington said he aims to highlight the seven key principles of Kwanzaa — unity, self-determination, responsibility, purpose, creativity, cooperative economics and faith — to bring an element of spirituality and joy to campus at the close of the semester.

Washington said this event is part of the Office of Diversity and Inclusion’s flagship program meant to promote Black excellence and celebrate culture in a lighthearted and entertaining way.

“With this event being focused on unity and creativity and faith and celebrating all of that through an interactive, immersive experience, I think that students would get a lot out of Kwanzaa,” Washington said.

The event will consist of many traditional practices, including a kinara — a lighting ceremony — from the National Pan-Hellenic Council. Christopher Scott, president of NPHC and a fourth-year in architecture, said kinara is a Swahili term, meaning a candle holder consisting of different colors to represent the seven principles of Kwanzaa.

The event will also include a Karamu — a communal feast — catered by Kay’s Soul Food Kitchen, a keynote speech about self-love by Senior Vice provost of the Office of Academic Affairs Charlene Gilbert and a performance from the Thiossane West African Dance Institute.

Andre Brown, assistant director of ODI, said the Pre-Kwanzaa event has been hosted in different forms in the center to educate students on the meaning of the celebration and to bring together people with food, dance and inspiration.

“We really try to promote all those cultural pieces of the principles in our everyday work and our programming,” Brown said. “It’s really just an opportunity to have people express themselves and help students to find themselves.”

Scott said members of the Divine Nine will lead the kinara to represent unity among Black student organizations on campus. He said the cultural traditions of Kwanzaa align with the NPHC motto of togetherness and empowerment.

“In the history of Kwanzaa, the idea was to create a space and holiday representation for Black people during the month of December in a time of strife,” Scott said. “One of our biggest missions in the past year is to branch out a little bit more and represent ourselves as an organization that represents the Black community and Black culture.”

Scott said the NPHC uses colors to identify their Greek organizations which can be seen as a symbol of unity.

Brown said the event is a collaboration of Black student organizations, faculty, staff and businesses coming together as one to highlight Black culture and uplift the spirit of all students.

“We’re definitely trying to focus on positivity in the Black Cultural Center,” Brown said. “We want to feed them mentally, spiritually and teach them the principles of Kwanzaa.”