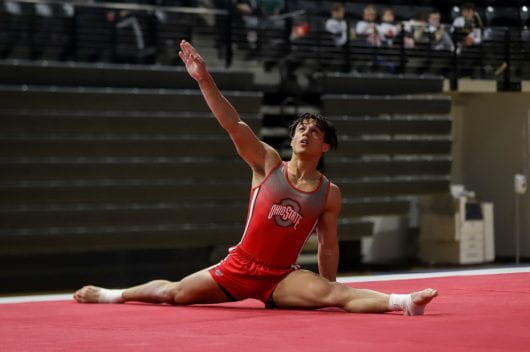 It was during the Big Ten Men’s Gymnastics Championships in April when Nelson sat in his hotel room in University Park, Pennsylvania, visualizing his vault routine over and over again, knowing he was going to stick it.

“I kept having gymnastics dreams about pretty much the whole meet but vault especially,” Nelson said. “I was imagining myself sticking it, sticking it all the time. I tell my teammates, ‘I called that,’ because I literally said I was going to stick it to like three people.”

When Nelson stuck the landing April 2 — something he was unable to do up to that point in competitions that season — with a career-best 14.800 vault score to win the Big Ten Championship in vault and said it was a “surreal experience.”

Since his former coach taught him the skill, Nelson said he’s visualized his meets for every event since he was 14 years old. They would dedicate 30 minutes to an hour visualizing the entire meet — everything from the warmup to the floor routine.

But gymnastics wasn’t always something Nelson imagined doing at the college level.

During the second half of his senior season in high school, the Coeur D’Alene, Idaho, native suffered an injury and found himself working in a gym he didn’t like.

“I really had to push it back into gear because I had already committed to Ohio State, and I had to change my mentality a little bit,” Nelson said. “I was almost about to quit. I was 18, and I was like, ‘I don’t want to do gymnastics anymore.’”

Nelson said one of gymnastics head coach Rustam Sharipov’s core teaching points is to “put yourself in uncomfortable situations, that way you’ll be comfortable for any situation you’re put in.”

When recruiting, Sharipov said he looks for athletes who want to grow. He said he often works with recruits at Ohio State’s three-day summer camps where he and the rest of the coaching staff have the opportunity to evaluate how the gymnasts accept feedback and deal with adversity.

When Nelson began competing for the Buckeyes as a freshman in January 2021, Sharipov said there was a “little bit of struggling.”

But, Nelson’s performance at the Big Ten and NCAA National Championships in the past year are a testament to the importance of fighting through uncomfortable situations and sticking with the process, a point Sharipov makes sure to emphasize to all his athletes.

“Sometimes kids try to say ‘Oh, it’s not working for me,’ and they try to change to a different vault, a different skill, and they think it is good,” Sharipov said. “But he [Nelson] actually stuck with that, and he was practicing, he was struggling, but he still did the numbers. The numbers don’t lie.”

Nelson said the NCAA Championships in August was the “best meet of my life,” finishing 15th overall in the all-around competition over two days.

Nelson and senior Justin Ah Chow, who also competed at the NCAA Championships but suffered an ankle injury preventing him from completing the event, are prime to serve in leadership roles for the Buckeyes this season.

Ah Chow said the underclassmen on the team have perfect mentors to guide them.

“I imagined myself being in my freshman year just a few days ago,” Ah Chow said. “Time flew, and here I am, and it’s nice to be in a position where I have so much knowledge already, and I’m able to help these freshmen in any way possible.”

For Nelson, being a leader, he said, comes naturally.

“I haven’t been nervous at a meet for a long time,” Nelson said. “I don’t know what it is. I think it’s just, I’m confident with myself. I’ve just been trying to teach the freshmen how to know your training and trust it and go into competition unfazed by all the people around, and just show what you can do.”