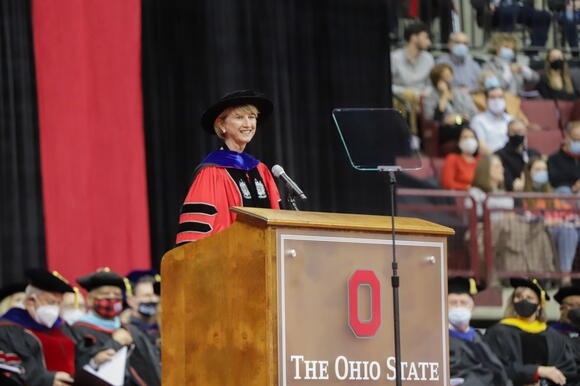 After University President Kristina M. Johnson announced her resignatio n just over two years into her tenure Monday, the Ohio State community was left shocked and without answers for Johnson’s sudden departure.

The Lantern reached out to 21 people — including university leaders and Board of Trustees members — by phone and email but did not receive a response by the time of publication. Others declined to comment. Those who responded expressed their surprise and the need to push forward as Johnson ends her time at Ohio State after the 2023 spring commencement.

Johnson had just under three years left on her five-year contract. Her plans for the university included achieving carbon neutrality by 2050 — with further plans to achieve the goal by 2040 — furthering the Scarlet and Gray Advantage program and decreasing campus crime.

Ben Givens, secretary of the University Senate and associate professor in psychology, said Johnson’s decision to resign “remains a mystery,” and said she is “well respected and liked” by the community.

“President Johnson is an outstanding national leader with an impressive vision for the future of The Ohio State University that unfortunately she will not be able to see come to fruition,” Givens said. “We are all very sad about her stepping away at the end of this year.”

Givens said Johnson did not have her annual evaluation at the November Board of Trustees meeting.

“The board leadership pulled the evaluation off the agenda,” Givens said. “I believe that the decision to pull that agenda item is related to why the President resigned.”

Susan Cole, professor and vice chair of the Department of Molecular Genetics and member of the Board of Trustees’ Academic Affairs and Student Life committee, said she was both surprised and saddened by Johnson’s resignation.

David Horn, dean of the College of Arts and Sciences, said in an email Tuesday to faculty and staff there are “few details about the circumstances” surrounding the announcement.

“[W]e remain committed to the priorities we set for ourselves earlier this year: to invest aggressively in our departments and schools, to build more diverse and inclusive scholarly communities, to intensify research and creative work, to ensure the academic success and wellbeing of our students and their access to extraordinary experiences, to support our staff, and to live into the mission of education for citizenship,” Horn said.

Horn said he “will maintain—and perhaps even build—our momentum during this time of transition.”

Undergraduate Student Government President Andrew Pierce said in a statement the members of USG were surprised by the announcement but are still focused on addressing students’ needs and representing the student body.

“We look forward to working with President Johnson and university administrators throughout the rest of her term to continue pursuing a campus environment of scholarship, citizenship, and equity,” Pierce, a fourth-year in public policy and analysis, said.

In a statement Wednesday, university spokesperson Ben Johnson echoed in a statement what Kristina M. Johnson said in her email.

“She made the difficult decision to step down as president, following commencement in May 2023 at the end of the academic year, so that a search for the next president can proceed and adequate time remains for her to assist with a seamless transition,” Ben Johnson said.

Gov. Mike DeWine told NBC4 he had a positive working relationship with Kristina M. Johnson but believes the university should move forward.

“I think we need to look to the future, and the future is that the Board of Trustees has to do the most important thing any board does, and that is to pick a president,” DeWine said.